Your morning happiness: Heading out for Skepticon 7 today.

Ugh, I woke up this morning to see a gajillion things I wanted to write about.  However, this morning Michaelyn, Dr. Dave, and I set off for Skepticon 7.  I think I’ll just cram them all into one post after this one.

This seemed like a good time to indulge in some nostalgia.

Ah, my first tussle with anorexia five years ago.  I was a college student then just trying to make a fun side project work with my friend Lauren.

Here’s a fan recording of my talk at Skepticon 3 (again, a three video playlist):

My first standing ovation as a speaker (though not as a performer).  It meant the world to me.  My parents were there and I was so proud to have shown them this thing I’d had such an enormous hand in.  After Skepticon 3 I took a job at the Secular Student Alliance.

The next year was tough.  I relapsed into anorexia and attempted to kill myself.  I also came out as somebody with psychological problems and spoke about it at Skepticon 4.  Michaelyn was in the audience and so was Christina.  I held hands with both of them and they supported me through this incredibly difficult talk.  But I was on my way to being healthy and, on the whole, I was optimistic about life.  It was such a good feeling.

By Skepticon 5 I was doing a lot better.  I had settled into blogging for a living and thought it would be a good time to hit on some of the arguments for god’s existence I had missed at Skepticon 3.  Also it was a good time to get engaged:

By Skepticon 6 I was a public figure with a pretty decent audience and a very well-read blog.  I decided to use the platform to give credit to many of the other people who I thought made the atheist movement great, but who weren’t getting the recognition that I was:

And here we are this year.  I’m less big than last year, bigger than others, but managing my weight.  In writing this it occurs to me just how central my concerns about my body are to my life.  So many ideas in these talks and what matters to me is how big my stomach is.  I should work on that.

I don’t think I’ll make anybody cry this year.  This one’s just a normal talk about god’s plan for the universe, nothing particularly special.  The special part for me is seeing what Lauren and the rest of the crew have done with Skepticon since I left, seeing old friends, and conveying my ideas to anybody who will listen.  I love being on stage, and that will be a hoot too.  Skepticon has just become comfortable to me, just like living has.  So different from the tumultuous existence I lived in college.  As I’ve gotten older, things have just gotten to be easy-going.  I like it this way.

But it’s a unique feeling to be able to watch all these videos and see all the life that happened between them.  I’ll be attending Skepticon married to the greatest woman I’ve ever known this year.  When Skepticon began I was convinced nobody could ever love somebody as fat as I (even though I was skinnier then than I’ve ever been).  It’s weird the turns life takes.

I guess there really wasn’t a point here.  Like all my writing I just wanted to share what I’m feeling and thinking.  Thanks for listening and for being a part of my life.  I’m really happy with how it turned out with Michaelyn, my friends, and with all of you who may have never said a word to me but with whom I’ve connected through my writing and speaking.  It’s not something I take for granted.  <3 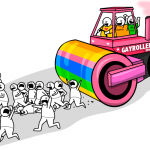 President Trump's IQ Leaked
Laughing in Disbelief
Related posts from What Would JT Do?

Nonreligious
I'll be on Recovering From Religion's stream-a-thon today!...
What Would JT Do?
TRENDING AT PATHEOS Nonreligious