Literally a few hours after I post a story about how the vast majority of Americans support having religious holiday displays on government property, I find a story of a nativity scene going up in the Texas Capitol. 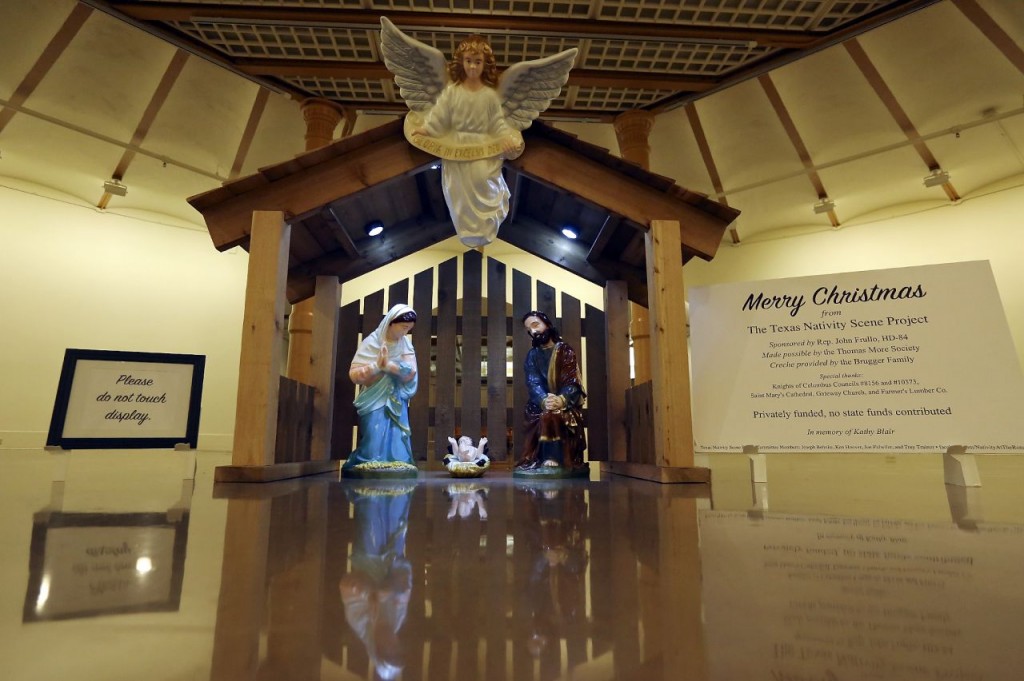 On Monday, a very simplistic nativity scene (pictured above) was unveiled in the basement of the Capitol’s rotunda with Joseph, Mary, and baby Jesus under an angel holding a sign reading “Gloria in Excelsis Deo” (“Glory to God in the Highest”).

From the San Antonio Express-News:

The Thomas More Society, a nonprofit law firm that specializes in religious issues, is sponsoring similar Nativity scenes in nine other state capitols this year.

Governor-elect Greg Abbott has stated that he also supports the Capitol crèche and plans on fighting for another nativity scene in Cherokee County where the American Humanist Association has sued after a Texas judge erected one on the county courthouse steps.

Now, on a constitutional basis, the nativity scene in the Texas Capitol on its own does not have a problem. Even the ACLU has agreed with this, saying that as long as it’s privately funded there’s nothing they can do to stop it, and that’s fine.

And the State Preservation Board, which is responsible for managing the day-to-day affairs of the Texas Capitol building, allows for all groups to be included and have their own displays in the rotunda basement or on other parts of the Capitol grounds.

Unlike in other states though, one must have the backing or “approval” of either “the Governor, the Lieutenant Governor, the Speaker [of the House of Representatives], a State Senator, or a State Representative” to get a display in the Capitol. This is a problem, especially for minorities.

No elected official in their right mind would attach their name to a display, holiday or otherwise, from say an atheist or Muslim or Satanist group. This is where the true constitutional question comes into play, because now many groups are having their voices drowned out and only those in the majority or with favorable views will be allowed to join in.

I even ended my aforementioned piece with this:

It doesn’t matter what Christians do or say, because if they get to put little baby Jesus in my state capitol, I get to put the Flying Spaghetti Monster right next to him.

Well, it seems I was wrong in that assertion unless I can get an elected official to have a temporary lapse of sanity and sponsor a display.

But we all know that won’t happen, so I guess my First Amendment rights and those of millions of other Texans don’t matter.

December 16, 2014
Open letter to anybody who acts like it's the end of the world when their drive through order is wrong.
Next Post