Lawsuit filed against my hometown due to county judge’s discrimination.

Lawsuit filed against my hometown due to county judge’s discrimination. December 24, 2014 JT Eberhard

My hometown has been pulling some shenanigans for the last year.  I’ll try to catch you up quickly.

Last year in my home town the local freethinkers asked to put up their own holiday display next to the nativity (which is on the courthouse lawn, as it is every year) – a banner reading “Happy Winter Solstice.”  They were denied.  Specifically, County Judge Mickey Pendergrass told them that even though it was nowhere in the city’s laws or regulations, no banners were allowed on the courthouse lawn.

Then, a couple weeks later, look what wound up on the courthouse lawn:

It reads “do you have an hour of your time? MENTORING PROGRAM”.  Several other banners have been placed on the courthouse lawn over the last year.  So when County Judge Pendergrass said “no banners”, what he meant was no banners for those wishing people a happy something that isn’t Christmas.

So several resident contacted the AHA’s legal team who informed the county that when it comes to sectarian messages, they either had to deny all groups or allow all groups.  Allowing Christians specifically while denying everybody else was against the law.

However, this year the nativity is back up after a year long threat of litigation from the AHA.  They’ve pulled some attempts at sneaky tricks (I say attempts, because they actually put the county in greater legal trouble than they were already in) like renting the space on the courthouse lawn to a private citizen for $1 so as to attempt to separate themselves from government endorsement (as if renting the space, or essentially handing it to someone who plans to put up a sectarian religious message while denying such applications from people with different beliefs is peachy keen legally).

County Judge Pendergrass has demanded a lawsuit (and I imagine he has done so without consulting the city’s official legal representatives, opting instead to consult the lawyer who puts up the nativity every year), and now he’s got it:

J.G. “Gerry” Shulze, a Little Rock lawyer, confirmed Tuesday the suit has been submitted to the U.S. District Court for Western Arkansas on behalf of the American Humanist Association and Baxter County resident Dessa Blackthorn. Baxter County and County Judge Mickey Pendergrass are named as defendants in the complaint. The lawsuit was officially filed in the court’s electronic filing system late Tuesday.

And of course all the right wing outlets in my hometown are twisting this into “atheists want to remove the nativity.”  Of course, that’s a lie.  We want equality and, when it was denied, people sought it legally.  If the citizens who wanted to place the Winter Solstice banner had been permitted as the Christians were, nobody would’ve heard a peep.  But then County Judge Pendergrass decided to give preferential treatment to Christians, even when he was warned what would happen if he continued.  He marched ahead anyway.

But the well has already been poisoned for the locals.  Lots of this: 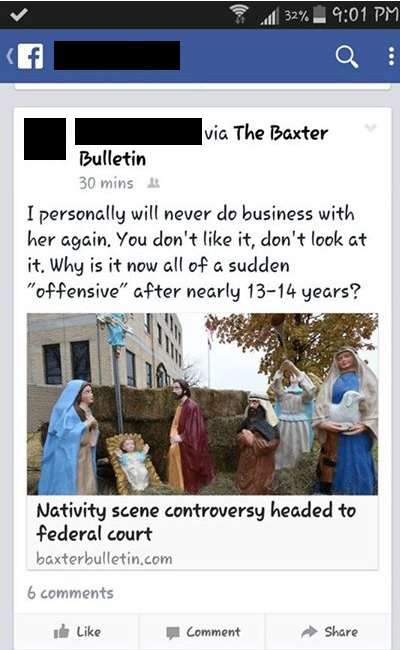 Telling people to “not look” at their own government ground is plain old bullshit.  And leave it to a Christian to say “Don’t like that the law is being broken?  Just look the other way.”  What’s more, since when is wanting equality suddenly finding the nativity to be “offensive’?  The only ones finding something “offensive:” are those denying access to everyone who isn’t promoting Christianity.  This is juvenile – like five year-old juvenile.  And it’s all based on a lie that Christians crafted in order to feel persecuted and happily spread by other Christians eager to feel persecuted.  Remember this every time you hear a Christian tell you that there religion is better for societal cohesion.

This is what anybody seeking equal ground with Christians can expect with certainty.  This is the guaranteed reaction by Christians in my hometown when somebody wants the same status they enjoy.  And it doesn’t stop there.  Local leaders openly advocate for running anybody who complains about this inequality out of town.  Gee, I wonder why nobody has complained in 13-14 years?  We’re meant to believe it’s because nobody is disgusted at the government for giving preferential treatment to Christians and not because of the long list of social consequences arranged and implemented by local Christians banding together.

This woman, Dessa Blackthorn, is unbelievably brave.  In the local paper’s article (which is actually very well-written), she says there are others locally who wanted to be the plaintiff, but who were too frightened of the reaction from local Christians:

“I’ve been asked by a group of people, who wish to remain anonymous, to represent them in trying to fight for equality on this courthouse property,” Blackthorn told The Bulletin.

This woman is incredibly brave.  This whole scenario is reminiscent of what Jessica Ahlquist endured.  But there is no police escort for Dessa (there’s a local police force that loooooves Jesus).  There is a business that hopefully doesn’t get vandalized.  Dessa has a lot to lose at the hands of outraged Christians, and she went ahead anyway.  That’s called integrity.  She’s defending laws that exist to protect all of us, even the Christians, and she’s willing to sacrifice for it.  In a perfect world, a world where the faithful love equality as much as their neighbors, this would be unnecessary.  But that’s not what Mountain Home, Arkansas is.

My family chimed in on that comment section of the local article announcing the lawsuit (which was actually balanced and well-written).  My brother said:

As an army veteran, I can confirm that it’s extremely disappointing and disrespectful when bureaucrats disregard the Constitution I took an oath to uphold. I hope the courts nail Pendergrass on this shady business.

And father was his usual thorough self:

The county judge and others want to twist this into “taking” the nativity. Actually, it is about sharing the square or MOVING the nativity. Equal rights for all, you know? No one wants to “take” it. Mr. Spencer orthe county—-whoever owns it (this changes with the breeze)—-can keep their creche.They want to paint this as an atheist plot. The truth is that people from all faiths and no faiths are interested in equality under the law and the established jurisprudence of the constitutional separation of church and state, which benefits and protects both church and state. The square should be open to either everyone or no one when it is available for sectarian displays.They want to frame it as an attack on Jesus, on Christianity, and on God. Nothing could be further from the truth. Move it to private property or let other citizen’s voices be heard on the square and you won’t hear a peep. It is about equality and the county being in compliance with the law. Jesus, Christianity, and God will be just fine with the creche across the street legally on private property, as long as His followers have love, tolerance, and a little good will toward men.

They keep saying the “Majority” wants the creche up, and they haven’t heard of anyone wanting it down. I suggest they go to Baxter Bulletin on Facebook and read the comments. Plenty of people are for equality. The Bulletin ran a poll a few weeks ago about whether religious symbols should be allowed on public ground, and the response was about 86% against.

The official legal council for the county is through the Arkansas Association of Counties. When were they contacted about the nativity, and exactly what advice did they give? If they weren’t contacted after a direct threat of litigation a year ago, the county judge is derelict in his duty and seems to be guilty of nonfeasance. It appears they are gambling tens of thousands of taxpayer dollars on an unnecessary suit without official legal advice based solely on their determination to promote a sectarian display on government ground while silencing the voices of everyone not in lock step with their preferred religious belief.

Every Baxter County taxpayer should be outraged by this behavior. I find it very hard to believe the official legal council for the county advised it to perform a lease which is transparently “nothing more than a sham attempt” to insulate the county from responsibility for the scene….”

Residents need to realize that the person responsible for this lawsuit is Mickey Pendergrass.  If he had let the freethinkers in Mountain Home put up their display, as he did the Christians, none of this would be happening.  He didn’t.  Anybody concerned with the truth can easily see the guilty party should the creche be removed from government property.  Yet, for all the insistence on their love of THE TRUTH, most locals in Mountain Home will stay outraged at the person stopping the lawbreaker rather than the lawbreaker – and all based on a lie.

So do this for me, please: head to the comment section of that article and leave some support.  It will make a difference to Dessa to hear that she has support.  If she is financially harmed in any way over this (which I think is pretty likely), I’ll set up a fundraiser for her.  But for now, let her know that there are people in the world who appreciate her efforts.