The moral hypocrisy of the religious right.

The moral hypocrisy of the religious right. December 9, 2014 JT Eberhard 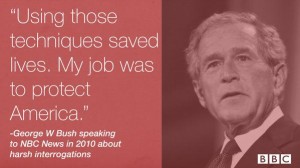 I thought I was done with the torture report story, but I’ve been sitting here stewing about it all morning and I don’t think I am.  I didn’t say enough about Bush and Cheney as well as the people who elected them.

Bush won election and re-election by pandering to fundamentalist Christians.  He did this by opposing same-sex marriage.  In his eyes, same-sex marriage was a sin against god and we needed to do whatever it took to ensure it was outlawed.  For George W. Bush and, more importantly, almost everybody who voted for him, two men or two women loving one another, caring for one another, and bringing joy into their partner’s life was a moral outrage.  This is how George W. Bush established his moral superiority in the eyes of fundamentalist Christians who carried him to political victory.

Now, long after Bush’s presidency, we see the hypocrisy.  Have you ever heard of rectal feeding?  I hadn’t either, but it’s now an unhappy addition to our lexicon after the senate’s report on the torturous practices of America in the wake of 9/11.  You can probably imagine what rectal feeding entails, so I won’t convey the details here. Other practices included simulated drowning and keeping people awake in compromised positions for over a week at a time.  There are no words that adequately capture the monstrosity of such practices.

And yet polls revealed that Bush’s fundamentalist Christian voter base, the ones who were (and still are) proud to boast of their moral superiority thanks to their faith in Jesus, were the ones who supported “enhanced interrogation techniques.”  Oh, they didn’t support torture.  But cloak the same behavior in a euphemism and they were all about it.  Fox News was right there to lead them with the message that we must do whatever it takes to keep America safe.  When these pious Christians said their prayers at night and asked themselves what would Jesus do, the answer came back through the sneering mouth of Dick Cheney and the consent of the man many thought god personally helped to win the White House: Jesus wanted simulated drowning and for confessions to be beaten out of these terrorists.  In the continuance of a long history of Jesus wanting whatever the religious right wants, Jesus wanted and condoned torture.

When it was time to topple Saddam’s regime, one of the reasons given for why we had to deploy our military toward that end was that Saddam was guilty of the most heinous forms of torture and America would not stand for it!  Of course, by that time the people spreading this message had already begun torturing our own prisoners.  The fundamentalist Christians fervently supported the President – torture was inhumane and America, being the moral bastion we were, would never turn a blind eye to it.  Then it came out that in Abu Ghraib and Guantanamo Bay we were torturing prisoners.  Without even knowing what these prisoners were being held for, those same Christians who demanded we hunt despots to the ends of the earth for their torturous ways now supported simulated drowning and other practices.  Hey, if it was to help stop barbarians who commit torture in the Middle East, the ends justified the means.

And it all started when George W. Bush was running for office, when he tapped that region of pride in the human brain.  He knew what they wanted to hear: “Look at the soddomites!  Look at these homosexuals!  See how they want stable, monogamous, life-long relationships?  See how they want to adopt and raise children, effectively rescuing them from foster care?  Look how evil they are, and look how moral we are.  We have to stop them!”  And those lousy with devotion to Jesus nodded their heads and made it so.

And later it was the same message: “Look at these terrorists (though not even close to everybody we’ve tortured fits that label)!  Look how evil they are and look how moral we are!  We have to torture them to save America!”

And now we know all of it, no running away.  The United States defied every principle for which we claimed to stand and we did, in fact, torture people.  And I can tell you right now which demographic largely won’t feel a tinge of remorse.  It will be the ones who voted for George W. Bush.  It will be those wrapping themselves in the American flag and still announcing their superior patriotism.  It will be those who believed god was, and still is, at their backs.  It will be those who conflated waterboarding prisoners with supporting the troops.  It will be the ones perpetually worked up into a frothing rage at the idea of same-sex marriage, but who will shrug off waterboarding as not that big of a deal.  It will be the fundamentalist Christians who can’t stomach the prospect of two men having consensual, pleasurable anal sex who will look at a brutal, sick, flagrantly immoral practice like forced rectal feeding and, with the sense of moral superiority that only seems available through unflinching faith in Jesus, say it was for the greater good – they had it coming.

The rest of us will know the truth: torturing people didn’t rescue America, it destroyed it as an ideal; and you lot were never patriots or heroes, you were just confused people who could’ve been rescued by compassion, but instead were corrupted by faith.

December 9, 2014
Episode of Atheist Analysis with myself, Danielle Muscato, and Sarah Morehead.
Next Post