UK judge rules baby of Jehovah’s Witnesses can receive blood transfusion against the wishes of its parents.

UK judge rules baby of Jehovah’s Witnesses can receive blood transfusion against the wishes of its parents. December 8, 2014 JT Eberhard

In England there was an unfortunate accident which caused an infant to suffer severe burns.  For doctors the prognosis was simple and clear: with surgery and a blood transfusion the baby would likely live.  Without them, it would almost certainly die.

The infant’s parents opted for the latter option because they were Jehovah’s Witnesses who oppose blood transfusions on religious grounds.  The issue went to trial and a judge has ruled that the baby can be treated despite the wishes of its parents.

“I am extremely grateful to (the boy’s) father for so clearly and calmly explaining to me the position held by himself and (the boy’s) mother,” said the judge.

“I have no doubt at all that they love their son dearly. I also have no doubt that they object to the receipt by (their son) of a blood transfusion because of their devout beliefs.

“I hope they will understand why I have reached the decision which I have, governed as it is by (their son’s) welfare.”

This is the power of religious belief: it can cause parents who love their child to choose for it to die

I respect the right of an adult to make silly decisions regarding their own lives (if either of the parents had chosen to die rather than have a blood transfusion, that’s their right).  But religious beliefs do not give you the right to abuse or otherwise harm children.

December 8, 2014
Debate (Do the findings of science entail that Christianity is false?): John's second rebuttal.
Next Post 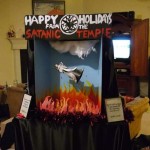 December 8, 2014 Fox News host: Satanism not 'legitimate' religion because Christianity is 'reality'
Recent Comments
0 | Leave a Comment
Browse Our Archives
get the latest from
Nonreligious
Sign up for our newsletter
POPULAR AT PATHEOS Nonreligious
1

Trump Pastor: If Biden Wins People...
Progressive Secular Humanist
Related posts from What Would JT Do?