FAITH: Do 36% of Muslims support Sharia Law and/or death for apostasy?

This post at a blog called Believers vs. Non-Believers is getting spread around, particularly because it contains this image: 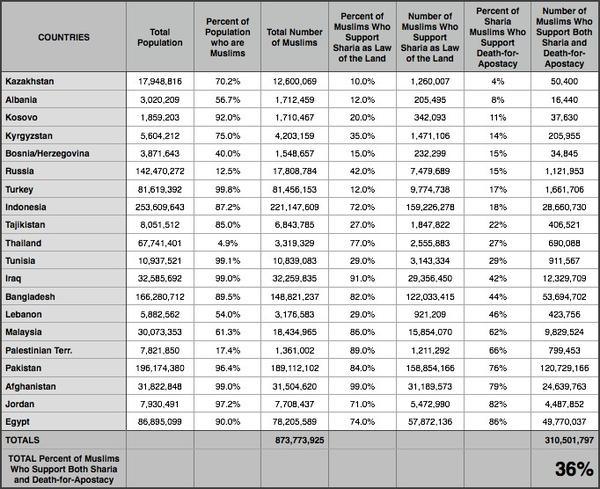 According to this table 36% of Muslims, or 310.5 million Muslims, support Sharia Law (which carries the death penalty for apostasy).  The source for the numbers are not included in the table, but the post did carry a link to this tweet by Michael Shermer: 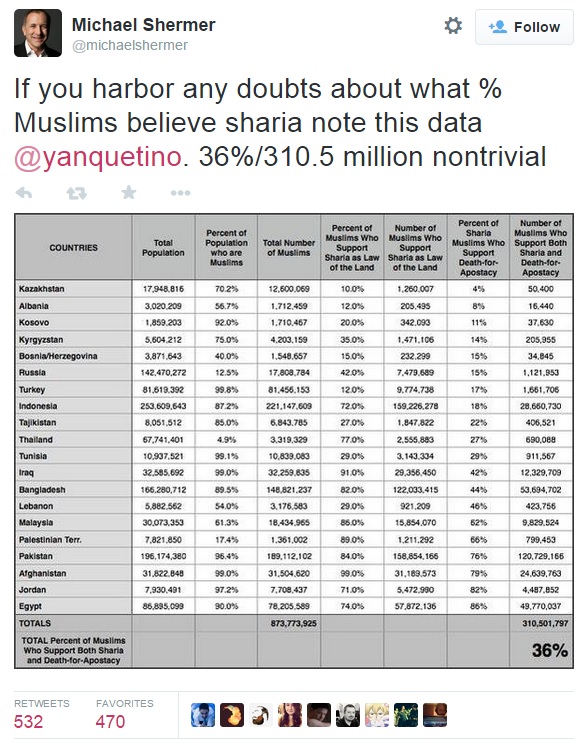 Again, no source for the numbers, which makes the fact that 532 people retweeted it a little disconcerting (even though Shermer is usually a reliable source in my estimation).

So where did these figures come from?  They are actually compiled from a couple of Pew surveys against population data for the countries in question by a man named Mark Larsen who did so to fact check the dust up between Sam Harris and Ben Afleck.  Here’s his post.

His sources all seem good, as does his assessment of Cenk Uygur’s objections to Harris, but with a caveat: the blog post at Believers vs. Non-believers and Shermer both say “36% of Muslims” when they should say “of Muslims in the Middle East and parts of Europe.”  The table only tackles those places.  There are Muslims in other countries that are likely far more moderate which would bring the global number down (though it’s hard to say by how much, certainly not enough to make these numbers easy to ignore).  However, that shouldn’t take away from the problem that is the influence of Islam in the Middle East and surrounding countries, which is clearly worrisome.  You can check out Laresen’s post for yourself (and I encourage you to do so), but the polling comes from Pew and the population data is easy to get.  So I’m going to go ahead and say that right now I think this table is accurate.

I caught Mr Larsen on twitter and he even sent me an updated version of the table replete with more recent data.  It’s still about 36% of the Muslim population of the Middle East, but the total population is up to about 312.1 million Muslims.  Here it is: 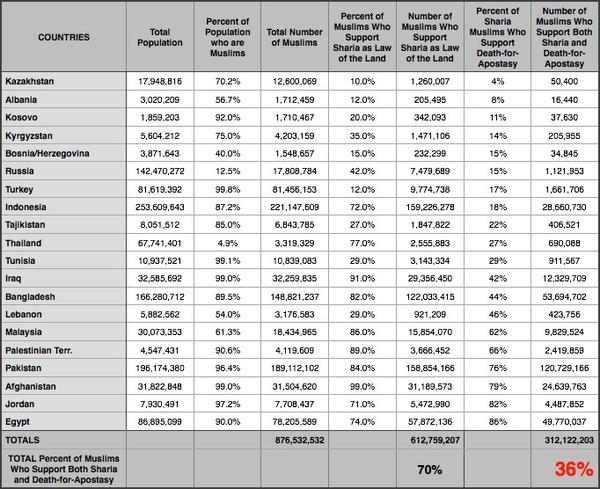 This is not a handful of extremists.  This is a real and massive problem in the parts of the world where Islam is most ingrained.

Mark Larsen is a professor of Spanish.  Here’s his online CV:

I received my Ph.D. in Spanish from Yale University in 1980, and subsequently taught at Wittenberg University in Ohio, Albion College in Michigan, and Utah State University. I am now Professor Emeritus of Spanish at the latter institution, but also occasionally offer my services to other institutions as a part-time adjunct.

Seems like a very nice guy in my interactions with him.

Evangelical Vaccine Denialists Latch Onto 666...
Roll to Disbelieve
Related posts from What Would JT Do?