Anti-gay side tells the SCOTUS we can’t alter the definition of marriage. We can, we should, and Clarence Thomas should know it.

April 28, 2015 by JT Eberhard
0 Comments
Anti-gay side tells the SCOTUS we can’t alter the definition of marriage. We can, we should, and Clarence Thomas should know it. April 28, 2015 JT Eberhard

Today the Supreme Court heard oral arguments for its first same-sex marriage case.  Justice Kennedy, widely believed to be the swing vote on this case, expressed reluctance to alter a definition that has been with us through millenia:

Justice Anthony M. Kennedy said he was concerned about changing a conception of marriage that has persisted for millennia. Later, though, he expressed qualms about excluding gay families from what he called a noble and sacred institution.

Indeed, that we can’t alter the definition of marriage seemed to be the anti-equality crowd’s primary talking point (it was all over twitter).  I have two things to say about this:

It really doesn’t matter.  The definition of freedom was with us for a long time (and excluded black people for most of it).  We changed it because securing equality was more important than maintaining a definition that undermined it.  The same must be for same-sex marriage.  It doesn’t matter how long the definition has been with us, it’s not the Supreme Court’s job to maintain definitions of words – it’s their job to make sure our laws are in-keeping with the guarantees of equality in our Constitution. 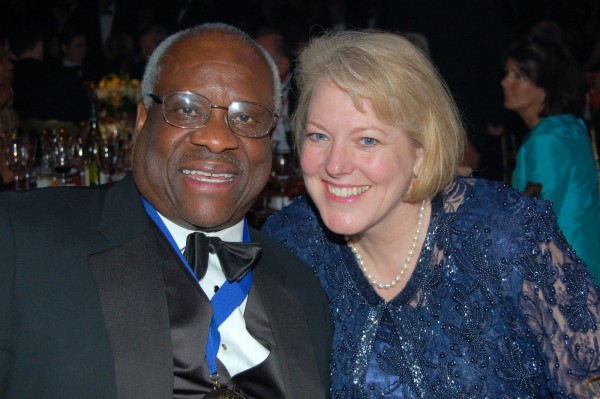 Astute readers might notice that Justice Thomas is black while his wife is white.  Up until 1967 this marriage could have been blocked in some states.  How would Clarence Thomas feel about the argument that our marriage laws shouldn’t be changed because the definition of marriage as between two people of the same race had been with us for a very long time?  Probably not too keen, I imagine.  Lucky for Justice Thomas the SCOTUS valued equality more than long-standing, unfair definitions back in 1967.  If anybody, if any Supreme Court Justice should be able to empathize with LGBT people who wish to marry their chosen love it should be Clarence Thomas.

And yet we all know Justice Thomas is going to like that argument a lot more when it applies to people who aren’t him.  Hypocrite.  This is the power of religious faith – not to give people empathy, but to take it away.

Hobby Lobby Staying Open After Vision...
Dispatches From the Culture Wars
Related posts from What Would JT Do?

Florida Megachurch Ignores Covid-19, Worshipers Flock To Service
Clear and Present Danger: A Florida megachurch ignores the coronavirus threat as...
view all Nonreligious blogs
What Are Your Thoughts?leave a comment
Copyright 2008-2020, Patheos. All rights reserved.