My sexuality and my journey to figure it out.

My sexuality and my journey to figure it out. April 17, 2015 Gabrielle 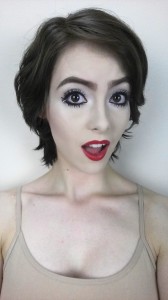 I have been trying to figure out my sexuality since I was 12. Throughout the years, I have had several boyfriends, but I never felt anything when we kissed. This was weird to me considering the media makes it sound like you are supposed to feel fireworks and all that nice shit. I even had girlfriends to try and see if that was what I wanted, but I didn’t feel anything then either.

If nobody feels something from kissing, what is the point in doing it at all? After a little while, I started feeling like something was wrong with me, that I wasn’t feeling what I was “supposed” to be feeling. Everybody else seemed to want sex so much and think about it constantly, yet I didn’t at all.

I kept trying to figure out what was going on with me, but that proved to be difficult. I had an idea that maybe I just hadn’t found the right person yet, which helped me cope with feeling different. At one point in time, I was with a girl and one of the boys in my youth group at church found out about it and I was extremely worried that my grandparents would be informed about it. Luckily, I only got judged by him and everybody he told.

I lived with my conservative grandparents growing up; my grandmother was incredibly controlling. She never wanted me to get internet on my computer, but she finally allowed it because it was so necessary for school. She wouldn’t let me get any social media accounts, but I did anyway in secret. She eventually found out, but she just grounded me for a while and then made me give her my login information for my Myspace, Facebook, Live Messenger, and my e-mail. She was horrible with technology, so I assumed she would never log into any of my accounts.

My grandmother got her friend to login to my Facebook account while I was out of town at a church camp. She read through all of my statuses and messages, including the ones from one of my previous girlfriends. My grandmother completely flipped out and called me (I was in Indiana, she was in Arkansas where we lived), yelling at me for having been in a relationship with a female. She grounded me from everything I had, effective the second I got home. I had to tell her that it was “just a phase” and that I would never do it again. This got her off my case, but she still kept me grounded for months.

A year later, I moved to a different school in Little Rock, AR. That is where I had my first two encounters with sexual desire. One of the two was somebody that I got to know to some extent, but then the feeling of sexual desire ceased when I saw something in his personality that I strongly disliked. The other person ended up being my only friend that I had at that school. I cared more about him than I have cared about most people in my life, but I only got to spend one school semester with him before I had to move.

After that, I didn’t feel sexual desire with anyone. I honestly thought that this was happening because of my depression, that somehow my dopamine receptors were so fucked up that they were keeping me from those feelings. I have felt a strong [mostly] physical attraction (I like the way they look and how they act) to many people, including females, but I only wanted be around them and learn more about who they are, not to have sex with them.

A month or so ago, one of my friends posted an article about asexuality. I had heard of the term before, but I never bothered to look it up. When I was reading the article it all seemed to make sense with what I had been feeling. I thought that asexuality might actually be what I am because it came closest to anything else that I had heard.

“a person who is not interested in or does not desire sexual activity, either within or outside of a relationship. asexuality is not the same as celibacy, which is the willful decision to not act on sexual feelings. Asexuals, while not physically sexual-type folks, are none the less quite capable of loving, affectionate, romantic ties to others.”

That label didn’t entirely fit me, so I never chose to label myself as such. I did not understand why I felt sexual desire before, but I usually felt nothing. I had only been sexually attracted to two people in my entire life. Because of more important things going on in my life, I stopped thinking about my sexuality…

…Until about two weeks ago at the American Atheists Convention. I met a new friend who was kind and fun to be around. I liked having that person around, as I like having many other friends’ company as well. Generally, when somebody has obtained my attention I become overly-curious and then I pay even greater attention to everything about them than I normally do. I find great enjoyment in reading people, so I pay great attention to how people act, the way they walk, their wording when they communicate, how they react to others, the way they hold themselves, everything.

He ended up sitting next to me for a little while during some of the speaker’s talks. That was the day that he got my attention. I was very physically attracted to him; I started to notice the way he talked and how perfect his smile was. The more we conversed with each other, the more I yearned for that smile; it made my heart skip. It somewhat surprised me how I was feeling already.

Things kept changing more and more with the amount of interactions we had. There were various things that I noticed that I liked about him, and I started thinking about him quite a bit, which I am also not used to. People usually don’t ever occupy that much space in my mind. Every part of me was yearning to know more, to be with him… and then for the first time in three years, I wanted to be in bed with somebody.

It is shocking to go from feeling nothing with everybody for so long to feeling a hot wave of desire. That feeling was all I could think about; it was so strong, so overwhelming. If this is what “normal” people feel, I don’t know how they control it. I ended up spending a little bit of alone time with him. Even when he just had his arm around my waist, it sent shockwaves through my body; I had never felt anything this overpowering. In those moments, all I wanted to do was to be wrapped up with him.

To this day I have never had sex with somebody I was sexually attracted to (even though there have only been three). Sex has always just been something that I use to please my partners; I didn’t know that there could be something better. I have always tried to initiate sex often so that I would seem like the “perfect” woman, one that most men seem to yearn for, a women who is just as or more crazy about sex as they are. To try and seem normal, I have never told any of my partners that that is how I feel.

Since the convention, I have searched extensively to try and find what society labels my sexuality. If I were to label myself, it would be the label that best describes what I am, which is “gray-asexual,” but change that to “bi-gray-asexual.” There are basically four different types of people who fall under the category of being a “gray-asexual.” To quote the reliable urban dictionary again, they are those who:

I identify with the fourth. I have thought through the instances in which I have felt sexual desire, and I have pinpointed exactly why I felt that way in those circumstances. To summarize what it takes for me to feel sexual desire towards somebody, I have to:

Nobody should ever feel like less of a person, no matter their sexuality, or anything else for that matter. Finding out who I am pertaining to my personality has helped me accept myself, which it has taken me a while to do. Now finding out what my sexuality is and that I am not alone is an amazing feeling. Whoever you are, whatever you are feeling,  you are not alone.

Thank you all for reading this.

April 17, 2015 FAITH & GAY RIGHTS: Michigan mechanic says he won't serve gay people, wonders why people are upset.
Recent Comments
0 | Leave a Comment
Browse Our Archives
get the latest from
Nonreligious
Sign up for our newsletter
POPULAR AT PATHEOS Nonreligious
1

Nonreligious
Why I HATED My Last Job.
What Would JT Do?
TRENDING AT PATHEOS Nonreligious