Catholic Channel at Patheos: Pope is infallible when speaking ex cathedra…but not on global warming!

The Catholic Channel at Patheos is a real hoot.  It’s a stew of your general super conservative talking points which means, to most of them, the consensus of climate scientists isn’t scientific.  However, tomorrow Pope PR is going to release a new encyclical which will label global warming a crisis and urge us to respond to it immediately.  One can only wonder how that will sit with all the Patheos Catholics who think the pope is infallible when speaking ex cathedra.

Now, I remain entirely skeptical of the hyperbolic – and I dare say scientifically unproven and unprovable – claims constantly being made about “global warming” or “climate change” or whatever the latest incarnation of that label is.

For one thing, I am of a certain age that I well remember the extremely alarming, so-called “scientific,” claims made throughout the 1970s about the coming onset of the next ice age directly caused by man’s careless environmental policies.

And, more to the point, no one has ever satisfactorily explained to me what role mankind played in the last five global warming periods which brought the earth out of its prior ice ages, stretching back millions of years.

Holy shit, there have been global warming periods in the past?  I’ll bet climate scientists haven’t considered that.  It’s a good thing climate scientists who’ve spent decades studying the climate and learning the relevant science have people whose last contact with climate science may have been in a basic high school course, but who are deferring to their theology to help them out.

One possible point of contention appears in Section 20, which implies that carbon dioxide—the byproduct of a normal human bodily function—is a pollutant:

“It is true that there are other factors (such as volcanism, and the variations of the orbit of the Earth, the solar cycle), but numerous scientific studies indicate that most of the global warming of recent decades is due to the large concentration of greenhouse gases (carbon dioxide, methane, nitrous oxide and other) issued mainly because of human activity.”

In Genesis 2:15, God directs Adam to care for the Earth and cultivate it. Indeed, the world—the ambient air and our entire ecosystem—have been entrusted to our benevolent care; and mankind must soberly reflect upon how an industrialized society will accept God’s challenge to exercise dominion over the planet.

Some worry, however, that adherents to a politicized “climate change” ideology will value conservation over human life, reducing effluents by reducing human population—either through contraception and abortion, or through euthanasia. But the draft does reject population control as a solution…

Perhaps one of the absolute stupidest arguments against global warming is that CO2 can’t be a pollutant because your body produces it naturally.  Yes, in certain amounts, CO2 is grand.  Too much though, and it becomes a pollutant.  You can test this by sealing your garage, running your car, and seeing how long it takes you to die.  Hell, too much oxygen is dangerous.

Or you could just look at Venus which has a hotter average surface temperature than Mercury despite being further from the sun.  The reason?  Ding, ding, ding!  Too much CO2 in the atmosphere.  Let’s ask some of the inhabitants of Venus if CO2 is a pollutant in large enough portions.  Oh wait, they’ve all melted.  Well let’s send a rover to Venus to test it (we’ve sent rovers to Mars even though it’s farther from the Earth, so Venus shouldn’t be a problem).  Oh, right.  Venus is a planet-sized pressure cooker thanks to all the CO2, so no rover would survive.

And no fundamentalist rant is complete without implying that the people on the other side are out to get the good guys, in this case the people who actually believe virtually every living climate scientist might just be doing it to slide population control under the radar. 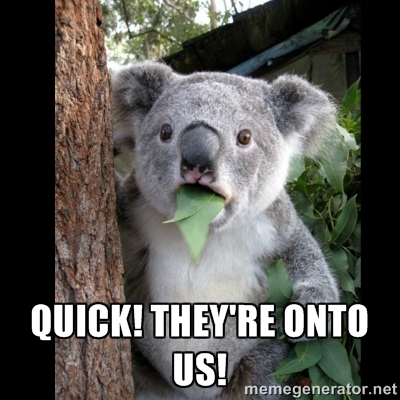 And then there’s Leah Libresco with…actually, she’s sensible when it comes to science.  One of these things is not like the others…

So there you have it: the pope is infallible, the lord works through him…until what he says contradicts their politics.  Then…meh.

I can’t wait to see what the rest of them write tomorrow.

June 17, 2015
Southern Baptist Convention president says god's gonna get us for all this gay marriage.
Next Post