Continuing the rebuttal of the article,  “9 Scientific Facts Prove that “The Theory of Evolution” is wrong.”

The author begins by quoting a book by Michael Denton, “Evolution: A Theory in Crisis”:

Despite the tremendous increase in geological activity in every corner of the globe and despite the discovery of many strange and hitherto unknown forms, the infinitude of connecting links has still not been discovered and the fossil record is about as discontinuous as it was when Darwin was writing the Origin.

I’m wondering if our author thought this was a slam-dunk argument, or whether the quote was chosen at random.

Keep in mind that humans only ventured out of Africa about 60,000 years ago. Any fossils/remains we’d find of our ancestors at this point would be readily identified as “only human” by the creationists. Any remains found anywhere else on the globe would be more recent than that.

In fact, genetic testing is what allows to to map ancient migration routes across the globe. That’s how well this is studied.

… so it’s hardly a rebuttal that we haven’t found “missing links” elsewhere.

Is the rebuttal that there’s gaps? Given that fossilization is rare, there may be species along the way, in our ancestry, which we will simply never have fossils (whether bone or stone). Nothing about that contradicts evolution or natural selection.

Provided all the “missing links” we do have, I guess we’ll have to settle for human common ancestry being “well supported” instead of “unfathomably overwhelmingly supported” by the fossil record, alone.

Ah, but a reader of Denton’s pipes in.

“Denton a Molecular Biologist removes all of the supports (if there ever were any) from Darwin’s theory of macro-evolution (continuity of life). Denton blasts all of the previous arguments made by the pro-evolutionists showing that there is essentially no support of macro-evolution in the fossil record. He also, clearly demonstrates that there is no support coming from his specialty molecular biology. In the end the only sound explanation he can make is that life is profoundly discontinuous.”

Okay, so an anonymous person, cited by a person who barely grasps evolutionary theory, read this book, and says, without any actual arguments or evidence provided, that evolution is disproved. I’m convinced.

This is bordering on being an Argument from Authority… maybe not quite.

Oh yeah? Well Jerry Coyne has a Ph. D in Biology, and wrote a book “Why Evolution is True“, and he says it’s true! Take that!

Please stick to (or start with) actual arguments and evidence. 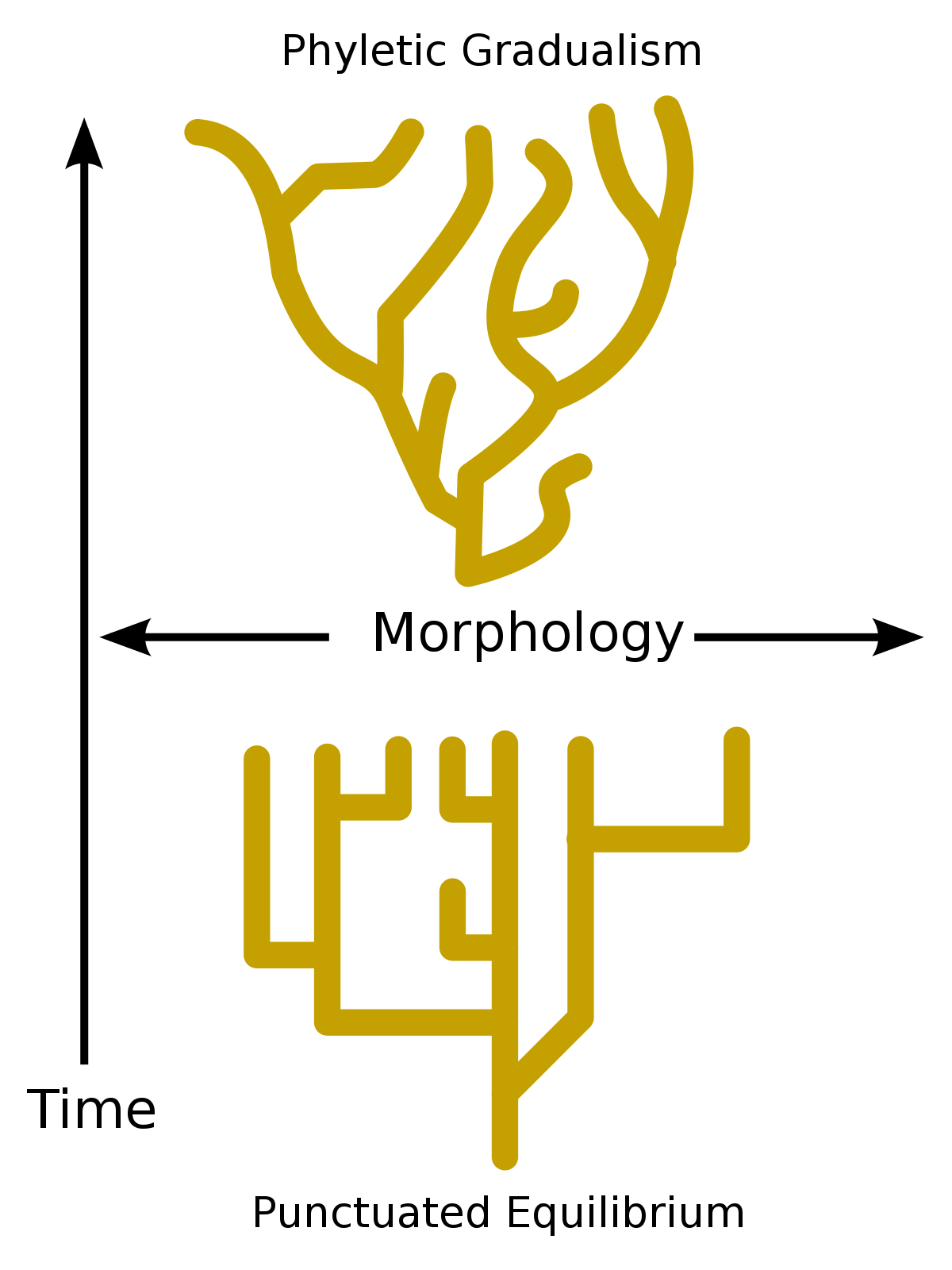 “Punctuated-equilibrium” by Miguel Chavez, modified by wooptoo – Own work. Licensed under Public Domain via Wikimedia Commons.

Let’s see how the author thinks this model disprove evolution.

The theory that evolution can occur in spurts, because the fossil record shows it did not occur gradually, is a wild stretch of the imagination. Species have some characteristics similar to other species, but similarity doesn’t prove any evolutionary link whatsoever.

Again with the “prove” thing. It’s evidence in support of relation, in the same way that sharing characteristics with your parents is evidence in favor of your relation to them. It’s hardly the only data we operate on, but it is positive evidence, yes. That’s how science works.

There are more than missing links in biology. There are entire missing chains in 100% of the branches of the evolutionary tree.

Okay, and? I agree it’s difficult to assess whether punctuated equilibrium has happened in the past, particularly when we have no fossils to examine… but there are some evolutionary lines that are very well stocked with fossils.

What does this have to do with disproving evolution? At best, it means this particular model, within evolutionary theory, needs some more supporting evidence. Even Richard Dawkins has made criticisms of punctuated equilibrium.

Many species are dependant upon another species for their coexistence. Hummingbirds and flowers are a good example. The flower would not be pollinated and would become extinct without the bird. They are said to have coevolved together. That is a stretch of the imagination without any basis in science.

I guess we’ve moved on from trying to explain how punctuated equilibrium disproves evolution. The author never addressed that.

Once again, the author fails to provide any argumentation, explanation, evidence, reason… anything to support a claim. Yes, co-evolution does have a basis in science – observation, if not the entirety of the evidence supporting evolutionary theory.

It’s such a vague dismissal that it’s not even addressable. The author is merely stating a personal opinion.

If I wrack my brain, I almost think the author may be making some kind of Irreducible Complexity argument.. maybe? But the formulation of thought here is so abysmally clouded that I’m left playing Wheel of Fortune, trying to guess a 50-word sentence with 3 letters up on the board.

There are hundreds of these examples that cannot be explained.

Explain what exactly? Have you tried doing any research? Natural selection would adapt a creature to its environment. Part of the “environment” are other creatures. It takes no imagination at all to conceive that, from another species’ perspective, not only would species A adapt to species B, but species B could also adapt to Species A.

Also, let’s not misconstrue “cannot be explained” with “hasn’t been explained.” Creationists love to mix those two up.

Well good thing that other scientists, since then, have. We don’t even really need the fossil record to demonstrate common ancestry. That was one of Darwin’s other concerns. He also went to his grave without knowing anything about another key requirement – a mechanism for heredity. We later discovered genetics.

Evolutionists have never found the missing links. Each time they announce finding one, it is later proven to be false.

June 10, 2015 MORNING HAPPINESS: Cow and pig.
Recent Comments
0 | Leave a Comment
"Totally different pope. This post is nine years old."
William Holy fuck
"Meanwhile, the BBC proudly announces that the Pope will enlighten its UK audience with his ..."
Broga Holy fuck
"He was testing the new Church policy! Yeah, that's it..."
Raging Bee Holy fuck
"Is 7522 your prison number?"
Mourning Warbler Anti-gay side tells the SCOTUS we ..."
Browse Our Archives
Follow Us!