Huckabee: Gay marriage will result in Christianity being criminalized.

Ol’ Huckabee is at it again:

In an interview with Decision, Huckabee repeated his warning that marriage equality will lead to the “criminalization of Christianity,” saying, “When you elevate a lifestyle to the status of a civil right, I don’t think a lot of believers fully understand or comprehend that once it’s risen to that level and our government accepts it, then anyone who disagrees with it could be at least civilly liable, but more than likely would be criminally liable.”

Y’know, I’ll bet I could run for President using the Mike Huckabee/Republican scare strategy.  Let me try this.

“Do you have shoes?”

“You’re in real trouble.  Shoe faeries are out there and will turn your shoes into flesh-eating monsters, but you’re safe unless you’re a Christian.  Are you a Christian?”

“Don’t take your shoes off!  They’ll know you’re on to them.  Listen, your government is working to protect the shoe faeries.  I’m running for the Republican nomination.  Just give me your vote and I’ll fix all of this.”

Boom!  It’s that easy.  You tell somebody they’re being threatened in a transparently absurd fashion, insisting your political enemies are the source of the threat, and then you cast yourself as the only solution.  We already know it works with this crowd because they’ve bought into hell with Christianity as the only solution.  Badda bing, badda boom!  God damn Republican politics is easy.  You don’t have to know shit for dick about anything, you just have to exploit people’s fear!  The only way it wouldn’t work is if somebody has the minimal intellect required to see that the threat you’re painting doesn’t exist. 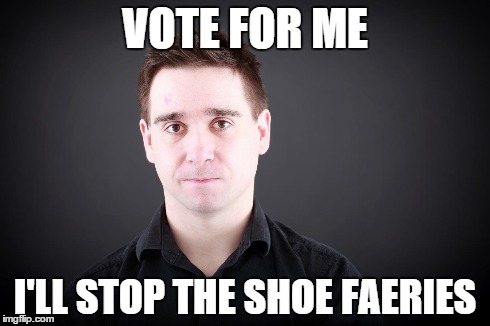 June 3, 2015 Santorum: Pope should leave climate change to the scientists.
Recent Comments
0 | Leave a Comment
Browse Our Archives
get the latest from
Nonreligious
Sign up for our newsletter
POPULAR AT PATHEOS Nonreligious
1

Marjorie Taylor Greene Is Pregnant And...
Laughing in Disbelief
Related posts from What Would JT Do?