As the story goes, Joseph Smith used a pair of magic rocks (the Urim and Thummim) to translate the golden tablets that would become the Book of Mormon (dumb dumb dumb dumb dumb).  Pressed to sustain its stories about the tablets and the magic rock (in ways other Christian denominations will never be pressed to do about their stories of Jesus rising from the dead and walking on water), the Mormon Church has released pictures of one of Smith’s magical rocks:

The Mormon church‘s push toward transparency about its roots and beliefs took another step forward Tuesday with the first published pictures of a small sacred stone it believes founder Joseph Smith used to help translate a story that became the basis of the religion.

The pictures of the smooth, brown, egg-sized rock are part of a new book that also contains photos of the first printer’s manuscript of the Book of Mormon. Officials with The Church of Jesus Christ of Latter-day Saints unveiled the photos at a news conference in Salt Lake City.

Boom!  Here it is in all its magical glory: 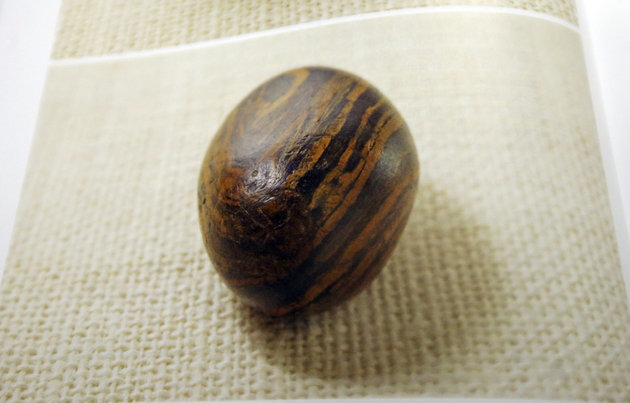 I reached out to an ex-Mormon I know to get his take on it:

Most Mormons weren’t aware of the “put a rock in my hat” method of translation until seeing the Mormon episode of South Park. Church manuals had pictures depicting it like this: 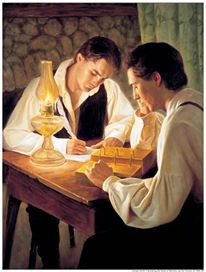 This, like the essays released last year, shows that the church is trying to jump in front of the Internet and how ridiculously easy it is to find out the real history of Joseph Smith.

Reading the comments cracks me up. “I really feel the spirit looking at this rock!” Like, it is a nice little historical find. I compare it to finding George Washington’s glasses. Except whereas one was the father of our country, the other was a pedophile.

The church newspaper is already scrambling to make this the new normal, comparing it to an iPhone. Seems legit.

Here’s the thing: the Mormon Church could’ve thrown any rock there.  Let’s imagine this really is the one that Joseph Smith used to translate the tablets.  What if, instead of this stone, the Mormon Church’s leaders had walked out into their driveway, picked up the first rock they found, and used it instead?  Do you think Mormons reading this story would suddenly say, “Hey!  That rock doesn’t look magical at all.  I’m skeptical!”  Of course they wouldn’t.  The reaction would be exactly the same.

This is the power of religion – to dumb down its followers so that even mundane things are seen as confirmation of the godly magic in their holy books.

August 5, 2015
Christie says he'd like to punch teachers union in the face. Lifelong teacher offers up his face.
Next Post

August 5, 2015 My appearance on Atheist Avengers.
Recent Comments
0 | Leave a Comment
"Totally different pope. This post is nine years old."
William Holy fuck
"Meanwhile, the BBC proudly announces that the Pope will enlighten its UK audience with his ..."
Broga Holy fuck
"He was testing the new Church policy! Yeah, that's it..."
Raging Bee Holy fuck
"Is 7522 your prison number?"
Mourning Warbler Anti-gay side tells the SCOTUS we ..."
Browse Our Archives
get the latest from
Nonreligious
Sign up for our newsletter
POPULAR AT PATHEOS Nonreligious
1