The Bible Reloaded podcast did a review of anti-gay film “Audacity.” Ray Comfort filed a false DMCA to have it removed.

The Bible Reloaded podcast did a review of anti-gay film “Audacity.” Ray Comfort filed a false DMCA to have it removed. August 26, 2015 JT Eberhard

Ray Comfort has recently put out a movie called Audacity that attempts to dissuade people from being gay (good luck with that).  He’s also misled people about the movie’s sole accolade, which should tell you about all you need to know about how awful this movie is.

So The Bible Reloaded did a review of the movie.  However, they logged in today to see that it had been flagged for copyright infringement and taken down: 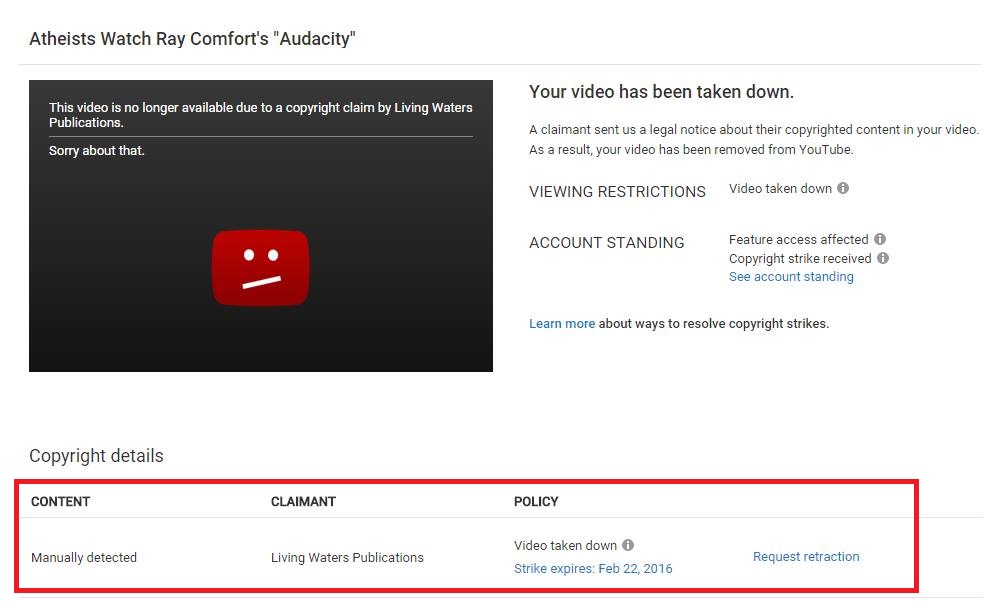 I spoke with Jake from the show who told me, “We did a review of it, used no footage or audio to make sure. We even mentioned it in the video.”  So whoever complained to YouTube must have the position that criticizing somebody somehow violates copy law.

A look at the screen cap reveals that Living Waters Publications lodged the complaint.  Now where have I heard of those people?  Oh yeah!  They “won” a silver Telly award (the equivalent of a participation ribbon you pay for) recently:

Hey!  That’s Ray Comfort’s company that made Audacity!  Doesn’t that movie criticize homosexuality?  Hrm, by Comfort’s standards we could say his movie is violating copyright and spare the world exposure to this digital collection of lame arguments.

And plus, isn’t Comfort always talking about how his side has the Truth (hell, they probably have the copyright on it listening to him) and should always be willing to defend it against interlocutors?  That’s what he was attempting to do here, right?

(Ironically, that clip actually uses an excerpt from one of Ray Comfort’s videos, which is totally legal – you can use small portions of things for the purposes of critique.  And yet, no DMCA has been filed against that one)

But maybe when Ray talks about the need for Christians to defend their beliefs he was being metaphorical.  You know how the bible says to kill people for working on Saturday, but it apparently means to not do that?  Maybe when Ray Comfort says Christians should rebut criticism and defend the bible he means you should suppress criticism by whatever underhanded and dishonest means are available.

According to Jake this does more than just silence criticism of Comfort’s movie (which will hopefully be resolved soon, TBR has lodged a challenge of the DMCA with YouTube):

This affects the length of our videos (max 15 mins now), and our account has a copyright strike, which is bad.

If we get too many copyright strikes, they delete the channel.

And then we don’t have jobs anymore.

Man, if someone lied to arrange for similar restrictions to be imposed on Ray Comfort we’d probably hear about how it’s such a drag with persecution always keeping the Christians down.  So much for the Golden Rule.  Jesus probably didn’t know what he was talking about there anyway, right?  For a guy who frequently asks people where they get their morals from if not the bible Ray Comfort isn’t doing the bible any favors with own ethics here.

So here’s Ray Comfort’s twitter.  I plan on pinging him to get his take on the fake DMCA.  Feel free to make the same request.

August 26, 2015
Ohio considering law that would make abortion illegal if the fetus had Down syndrome.
Next Post

August 26, 2015 This atheist thinks CJ Werleman is wrong. Nobody deserves to lose a loved one to gun violence.
Recent Comments
0 | Leave a Comment
"You don't seem to get it. The bible is quite interesting and says some true ..."
plantman13 Am I evil for pointing out ..."
"Totally different pope. This post is nine years old."
William Holy fuck
"Meanwhile, the BBC proudly announces that the Pope will enlighten its UK audience with his ..."
Broga Holy fuck
"He was testing the new Church policy! Yeah, that's it..."
Raging Bee Holy fuck
Browse Our Archives
get the latest from
Nonreligious
Sign up for our newsletter
POPULAR AT PATHEOS Nonreligious
1