Kim Davis: a modern day “Rose Parks.” [Could be a fake]

[UPDATE] So I’ve been following this twitter account for a few days and it’s seemed legit, but a piece Hemant wrote gives me pause.  You should read it yourself and decide.  If it is a troll account, props to it for subtlety.  I’ll keep digging and amend as I find out for sure.

[UPDATE: YEAH, IT’S A TROLL ACCOUNT]  Wow, yeah, that twitter account is a parody.  It’s the most subtle troll ever, but it’s a troll.  This whole letter should be disregarded as it’s highly unlikely Kim Davis didn’t write it.

For those of you unfamiliar with Martin Luther King Jr.’s Letter From A Birmingham Jail, click here.

Kim Davis, along with her handlers, is trying to prop herself up as a modern day civil rights hero.  Starting by denying a minority their civil rights was a pretty silly way to go about it, but I digress.  Twenty minutes ago Davis’ husband tweeted her “letter from a Carter County jail.”

Here are the pages of her letter if you want to peruse them (there are things scratched out, she really did try to proof-read it…anyway, click them to make them big enough to read): 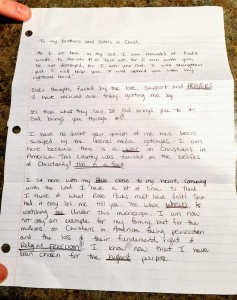 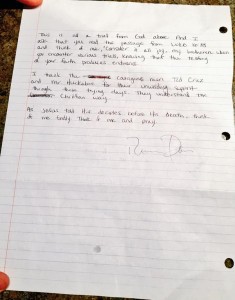 How quaint. Aside from the inanity of the whole thing, which I’ll touch on tomorrow, take a gander at the last paragraph for this line:

I think about what Rose Parks must have felt.  She had it easy let me tell you.

Rose Parks.  Maybe that was Rosa Parks’ killjoy, white, homophobic sister. And Rose Parks had it easy?  Wow.  Is it hard being a Christian in the United States?  You’re a member of the majority comparing yourself to a woman who opposed legal discrimination of the minority, and you draw that comparison because when you commit contempt of court you get punished just like everybody else?  Not being above the law isn’t persecution you spoiled rotten brat. It could not be more obvious that this woman has no clue who Rosa Parks was.  News flash: they made all the black people sit in the back of the bus back then.  That’s discrimination.  As it stands now, only the Christians guilty of contempt of court wind up facing the consequences for being in contempt of court. What else was there for me to tweet back?

There you have it, everybody: god’s chosen.  MLK has nothing on this grammatically challenged woman.

Look, I try really hard to focus on the arguments, but sometimes there’s just nothing else to say: Kim Davis is an abject idiot who harbors delusions of both morality and grandeur.  That’s really all there is to say.

September 5, 2015
Tim Tebow released from the Eagles. Experts suggest he give up trying to be an NFL quarterback.
Next Post

September 6, 2015 I think I have their attention...
Recent Comments
0 | Leave a Comment
Browse Our Archives
get the latest from
Nonreligious
Sign up for our newsletter
POPULAR AT PATHEOS Nonreligious
1

'Satanic' school head, pictured with a...
The Freethinker
Related posts from What Would JT Do?