Examining Biblical Prophecy – pt. 8 – what is the prediction?

Here we continue examining some Biblical prophecies (Index) – what is the prediction?

I’d like to distinguish between a prediction’s broadness and its vagueness.

For “broadness”, we’re saying that the parameters are such that many things could qualify. For instance, saying “It will snow in Maine” is a very broad statement, and many instances of snowing can fulfill that. On the other hand, saying “It will snow in Maine, on February 12, in Bangor” is a very narrow claim, and few, if any, instances will match.

Broad predictions aren’t bad, per se… just not all that useful. This isn’t the same thing as a “vague” prediction. 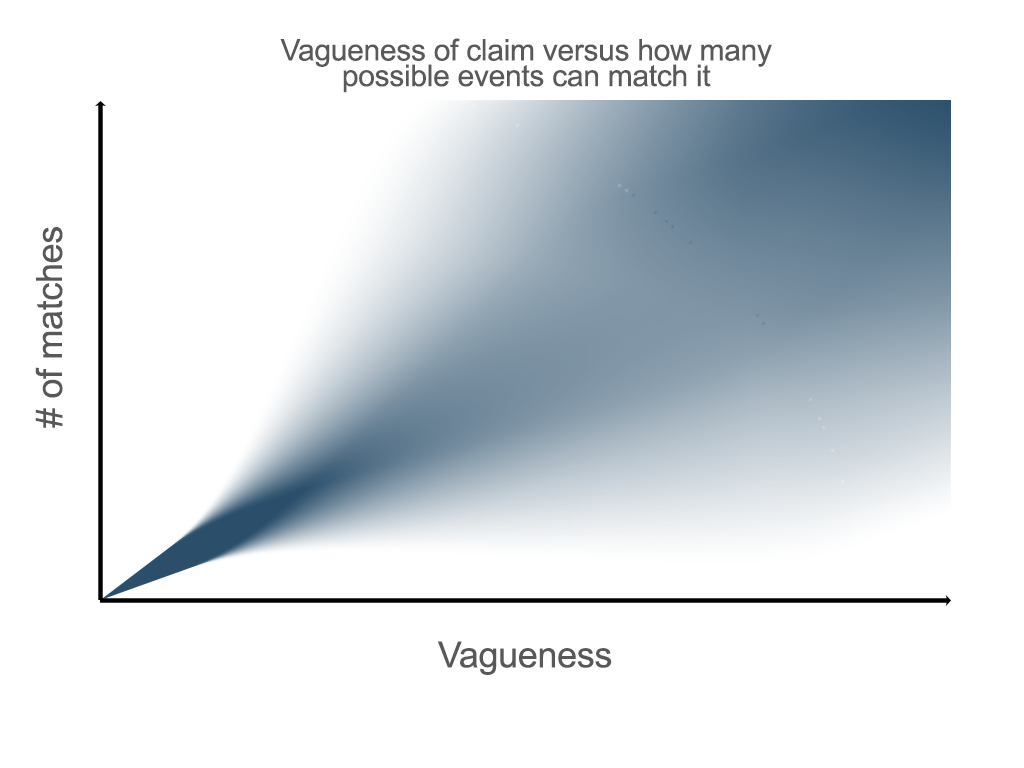 The key difference, is that it’s ambiguous whether a thing even qualifies as “fulfilling” the prediction. Does sleet count as “snow”? For a “snow event”, are we talking about at least a single snow flake falling within the Bangor city limits, or a total coverage?

It’s really tough to make sure all parameters are fully defined, but it’s not a binary yes/no as to whether something is vague. It could be that a prediction is focused sufficiently to be adequate.

In many cases, we’re not talking about scientific parameters, but are trying to determine what a person meant when he/she made a statement. As we’ve all experienced, humans suck at specificity most of the time, hence the popularity of “thing” and “stuff”.

When examining the Bible, it’s riddled with claims that are extremely vague. This is said to be on purpose, because it’s “symbolic”. That doesn’t make it automatically invalid. Words themselves are symbolic. It’s just a question of having the commonly-shared symbolism-to-meaning lookup table (like a dictionary).

For those who are claiming that the Bible is predicting the future (or had predicted the future), symbolism is probably their only avenue to justifying those claims, since their god apparently couldn’t give them anything more concrete… because that’d just make it too easy.

But this is what they do… 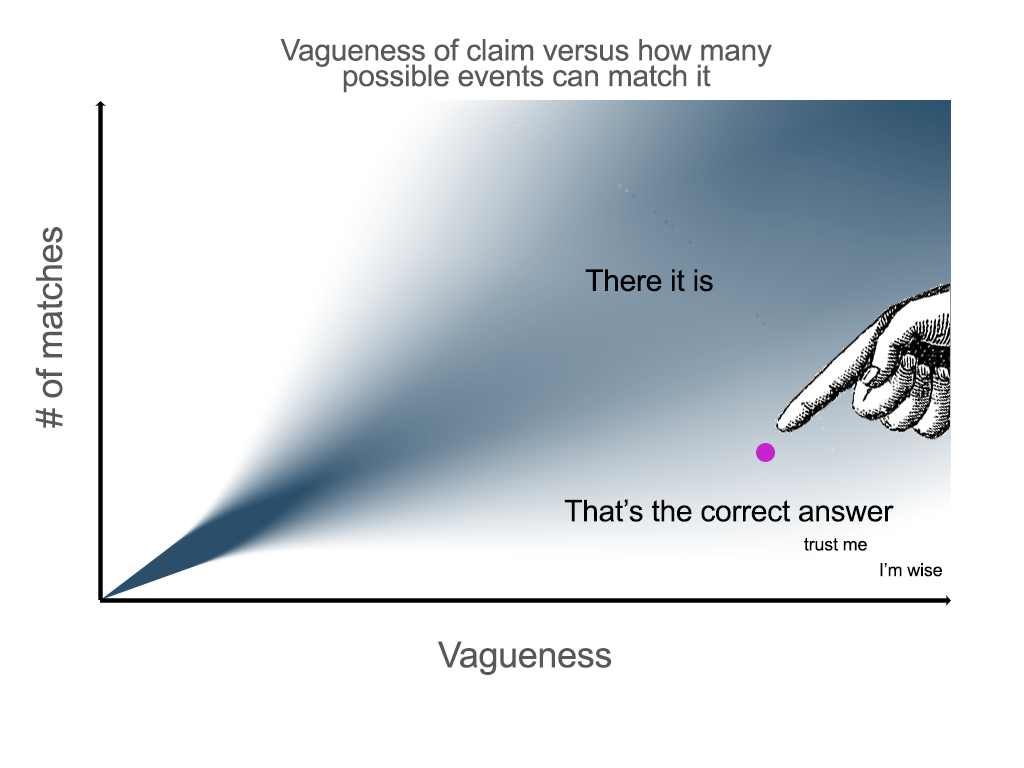 They just pick a spot, declare that’s the answer, and if you don’t agree, you clearly haven’t studied enough (and no explanation is provided).

When it comes to predictions, I can ask a question that’s mostly rhetorical,

If a person predicts A, and B occurs, does that demonstrate that the person successfully predicted A?

Simply, the answer is “no”, but what if B, looks a lot like A, or even identically so? The answer is still “no”.

Suppose we have identical twins, who appear identical, but are two different entities. I predict that the twin-A walks in through the door, but instead, the twin-B does. To external observers, if they can’t tell the difference, they may think I got it right… but I didn’t. My intention was to predict twin-A.

I didn’t say, “a person who looks identical to twin-A will walk in through the door.” That would have been a broad claim, with multiple possible ways to fulfill the prediction.

… and that’s the best case scenario, when there’s virtual zero vagueness involved. Once we’ve added enough vagueness to the situation, we essentially lost the ability to determine whether the prediction was fulfilled.

Supposedly Biblical prophecy isn’t saying that just any messiah will come along and do some variety of things… the entire point is that exact specific people will do exact specific things at exact specific times, and the only question is how well it’s communicated and understood.

Jesus was predicted. How would God not know the specifics of his own plan, to then install into the Bible? Or was he like, “I guess I’ll do something with a messiah… I’ll figure it out later“?

So let’s talk about cryptographic hash functions (not really). Most websites that have accounts do not store your password (if they’re competently built). Instead, they store a generatable consistent representation of your password. The next time you sign in, it converts the password you just re-entered through this same consistent process, and compares that to what’s in the website. If it matches, you’re good.

The “hashed” value is the sum of all the letter values, so:

However, if I give you the value of “6”, can you say what the original password was? Looking at the rule, there’s many combinations that could also add up to “6” (good password hash functions don’t have this vulnerability). So, only given “6”, you don’t have any way of determining the person’s intended original password.

If all we have is the final output of this process, the original information is irretrievably lost.

Biblical Prophecy has this problem of the same nature. There’s a big difference between what the author intended to predict, and what the writing describes as the prediction. Communication problems between humans is nothing new.

That’s why I keep asking “How do we know this is what the author was trying to predict?” We look at Psalm 22:16 (ESV),

For dogs encompass me;
a company of evildoers encircles me;
they have pierced my hands and feet

For what reasons do we think that this is describing a crucifixion, and not dogs biting at the hands and feet? What we have is a vagueness problem, but the apologists keep treating it like it’s a broad claim, where as long as anything appears to match – whether the original author intended it or not – the prediction is therefore fulfilled. In other words,

Person predicts A. B, that sounds like A, occurs. Therefore, A is fulfilled.

Again, this isn’t insurmountable. However, since we cannot question the author anymore, and since the text is (apparently intentionally) obfuscated through subjectively interpretable inconsistent symbolism, it becomes exponentially difficult for them to make their case beyond a reasonable doubt.

They need a hell of a lot of justification to bring the vagueness into focus, for a particular claim. If they cannot adequately justify claims about what the author’s original intent was, it’s not possible to demonstrate that the prophecy came (or will come) true.

They’re trying to have their cake and eat it too…. saying that they have the “proof” (to adequately show something is true) while simultaneously claiming that it’s specifically designed to not be “proof”.

They can’t have it both ways. Any “prophecy” without the symbolic justification provided, has zero value.

April 21, 2016
Tennessee to scrap a law that protects faith healers from persecution.
Next Post

April 27, 2016 On the rumors circulating about Sarah Morehead.
Recent Comments
0 | Leave a Comment
""Nothing in the world has anything to do with you" is inaccurate if we are ..."
Sean Reesor Taylor Mali: Do Not Think of ..."
"6 years ago or 6 minutes ago: The scriptures are God's word, Sin is still ..."
usnavyvet FAITH & GAY RIGHTS: Missouri megachurch ..."
"https://evolutionnews.org/2..."
Gerald McDonald Disproving Evolution – Part 15 – ..."
"Evolution within species is not evolution. It is natural selection. Evolution is supposed to show ..."
Gerald McDonald Disproving Evolution – Part 15 – ..."
Browse Our Archives
get the latest from
Nonreligious
Sign up for our newsletter
POPULAR AT PATHEOS Nonreligious
1

The Sheer Racism in the Russell...
Roll to Disbelieve
Related posts from What Would JT Do?

Nonreligious
Examining Biblical Prophecy - pt. 9 - Prophecies...
What Would JT Do?

Nonreligious
Examining Biblical Prophecy - pt. 6 - comments
What Would JT Do?

Nonreligious
Examining Biblical Prophecy - pt. 7 - fourth...
What Would JT Do?