A leaked email among some of the Democratic Party’s higher-ups show them considering a plan to expose Sen. Bernie Sanders as an atheist, saying it may “make several points difference” to Christian voters in vital southern states during the 2016 Democratic Presidential Primary.

In its latest barrage of leaked material surrounding the former Secretary of State Hillary Clinton, WikiLeaks released nearly 20,000 emails from the DNC. Some of those emails include an exchange between the DNC’s Chief Financial Officer Brad Marshall and Chief Executive Officer Amy Dacey.

The three emails in total revolved around whether or not they could get someone, probably a reporter friendly to the DNC or Hillary, to ask Bernie Sanders, “Does he believe in a God[?]” The initial email went on to claim that it could “make several points difference with my [Southern Baptist peeps]” in states like West Virginia and Kentucky, which were only a few days out from their respective primaries.

CEO Amy Dacey gave a one word response of, “AMEN.” 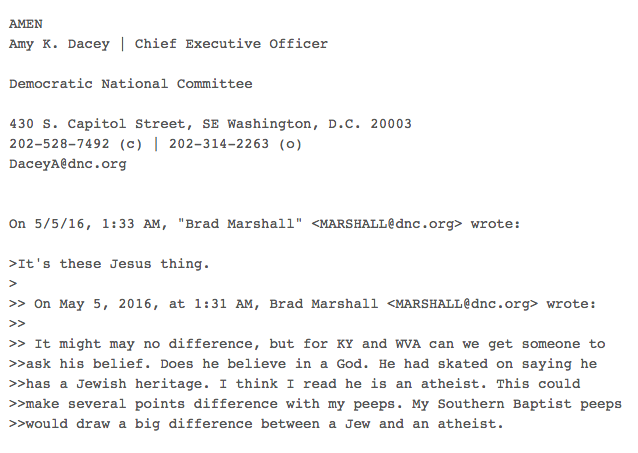 It was speculated all throughout the primary that the people at the head of the Democratic Party were colluding with or, at the very least, tipping the scales for Hillary Clinton to defeat the Vermont Senator. With this latest batch of emails, courtesy of WikiLeaks, it just shows how desperate they really were to ensure she grabbed the nomination.

Sanders trounced Clinton in West Virginia 51-35% anyway and then barely lost by 0.5% in Kentucky. If this plan had gone through and the DNC/Hillary campaign seized on a soundbite of Bernie sounding like he was an atheist and let the media do their work, it’s possible the results could be much different.

Atheists are one of the most hated groups of people in America with still a large number of American voters saying they would never vote for an atheist. The same poll showed less would be likely to vote for a socialist. Yay! We’re not last anymore!

Bernie Sanders has come out strongly in favor of separation of church and state, but he does not identify as an atheist. He has said he is ethnically and culturally Jewish but lives an overall secular life. He’s also said he likes Pope Francis for some of his very left-leaning politics and teachings.

Religion just seemed like something not important to Bernie. It’s definitely not important to Millennial voters who, by the way, strongly favor the Senator. They’re the future of the Democratic Party, and religion is simply not something they’re interested in when it comes to their presidential candidates. 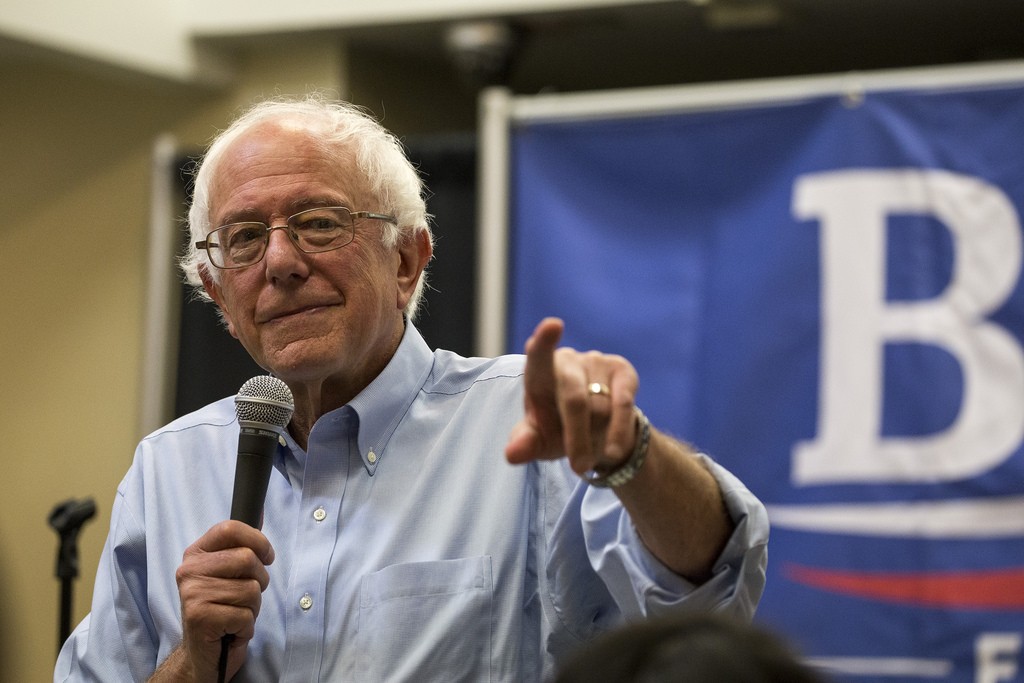 As an atheist, the thing I always personally liked about Bernie Sanders was that he kept religion out of it. He almost never brought up religion, unlike Republicans and even Hillary to a slightly lesser extent. He stuck to his message that this was about the country, not religion, let alone his religion.

This was refreshing. It was something we had almost never seen from major party candidates who had an actual chance to win. I gave major props to Ohio Gov. John Kasich during the GOP Primary for saying that he wasn’t going to use his religion to win votes because he felt that it “cheapens God,” something that is unheard of in American politics, let alone the Republican Party.

The fact that the DNC’s top officials would even potentially stoop this low in an attempt to win over bigoted voters who might be swayed by a candidate’s supposed irreligiosity is disgusting. That my own party would even consider this makes me ashamed to call myself a Democrat.

When I was running for the Texas House of Representatives, I wrote a piece for this blog about how the constant droning on about God and Jesus and faith at the 2014 Texas Democratic Convention made me feel like an outsider in the Democratic Party. I still do to a certain extent, but I felt like we had made progress.

The Secular Caucus had been added to the 2016 convention (something I had been telling people involved in the secular movement in Texas to do). Secular proposals had been adopted to the official platform of the Texas Democratic Party. In just two years, progress has certainly been made.

But Dacey and Marshall and people like them in the DNC who are willing to resort to these kinds of divisive tactics, all in desperation for their supposedly inevitable candidate, are holding us back and feeding into the problems with American politics.

I expect these sorts of attacks from Republicans. That’s nothing new. Despite the overt religiosity of many Democrats, I never expected for them, let alone people so high up in the DNC, to think this was even a possibility for an attack against one of their own presidential candidates. Just imagine if they had done the same thing to a candidate they suspected of being gay.

If you’re an atheist, whether or not you supported Bernie Sanders’ candidacy, these emails should worry you.

July 22, 2016
MORNING HAPPINESS: The wife gets her white coat today.
Next Post

July 24, 2016 Bernie Sanders reaffirms he's no atheist, DNC staffer behind leaked email apologizes
Recent Comments
0 | Leave a Comment
"Ben, can you update your broken links? Thanks!"
afAtheist The New Atheists are still right ..."
""Nothing in the world has anything to do with you" is inaccurate if we are ..."
Sean Reesor Taylor Mali: Do Not Think of ..."
"6 years ago or 6 minutes ago: The scriptures are God's word, Sin is still ..."
usnavyvet FAITH & GAY RIGHTS: Missouri megachurch ..."
"https://evolutionnews.org/2..."
Gerald McDonald Disproving Evolution – Part 15 – ..."
Browse Our Archives
get the latest from
Nonreligious
Sign up for our newsletter
POPULAR AT PATHEOS Nonreligious
1

Christian Conservatives Cheer Genocide
Daylight Atheism
Related posts from What Would JT Do?