Ask JT: Has anybody questioned the constitutionality of the Pledge of Allegiance?

Has anyone thought of questioning the constitutionality of the Pledge of Allegiance? The “one nation, under God” part is obviously a violation of the First Amendment. I know why that phrase was added in the 1950s (not that it was constitutional then), but surely someone has thought of trying to change it more recently.

Thanks for the question, Alex.

I contacted Monica Miller, Senior Counsel at the American Humanist Association‘s Appignani Humanist Legal Center, for some examples and she provided me with plenty, most notably Mike Newdow’s case Elk Grove v. Newdow. The case was thrown out by SCOTUS on standing grounds, but in its opinion, the Court wrote a lot of bad dicta (meaning stuff that is not the holding) about how the pledge is constitutional.

Mr. Newdow, along with FFRF, subsequently brought a federal case in NH, which made it up to the First Circuit, but they lost on the grounds that “under God” does not advance religion.

A similar conclusion was reached by the generally liberal Ninth Circuit:

The Pledge of Allegiance to “one nation under God” doesn’t violate a citizen’s right to be free of state-mandated religion, a divided federal appeals court ruled Thursday in reversing one of its most controversial decisions.

In a 2-1 ruling, the U.S. 9th Circuit Court of Appeals said no federal law requires students to recite the pledge or the religious reference in it.

The 9th Circuit had ruled in 2002 in a case brought by Sacramento atheist Michael Newdow that the wording violated the Establishment Clause of the Constitution’s 1st Amendment, which prohibits the enactment of any law or official policy in support of a religion.

We over at AHA have brought two lawsuits challenging “under God” in the pledge – both in state courts under state constitutions. The first was in Massachusetts – we argued to the highest court there that having public school students recite “under God” on a daily basis violates the state equal protection clause because it discriminates on the basis of religion, and specifically, against atheists. Unfortunately, the court did not agree with us.

We brought a similar suit in NJ but after losing a the trial court, decided not to appeal given the legal landscape is so hostile to these cases.

Essentially the situation we find ourselves in is this: of course “under god” in the Constitution advances religion over non-religion. This could not be more obvious and, historically, that’s precisely why it was put there in the first place: to show those godless Russians how pious and religious “we” are. But the legal system is like a kicker in football – after everybody else has made the tackle and piled on, he comes running along to jump on top of the pile. Look to same-sex marriage for a perfect example of this — after it became acceptable for most of society, the SCOTUS moved us along.

Right now there simply isn’t enough social pressure on any court to make that call, and even if we conquer the hurdle of standing there’s enough precedent that judges can deny the obvious. Any lawsuits right now on the matter would probably just set more bad precedent, which we don’t want to do.

So what’s the solution? Well, as much as court’s should ideally remain impartial, there are judges who lean more left. I think a good start would be, of the two options for President, putting the one in who will not appoint right wing theocrats to the SCOTUS. Will Hillary’s Justices rule against “under god”? Maybe, but also maybe not. But remember, change isn’t an all-or-nothing proposition (and I would seriously question the wisdom of anybody who treats it that way). Change is a slow process that comes in increments, and that would certainly move the court to the left. After that we just have to keep moving it.

Do I think “under god” will come out one day? Sure. But I also think it’s a ways off.

For an additional and humorous perspective, here’s Doug Stanhope:

Got a question for me? Just click that shiny button at the top of the blog: 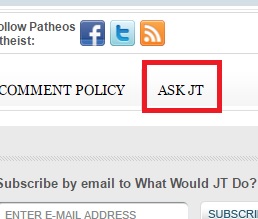 Nonreligious
This morning the Oklahoma Supreme Court shot down...
What Would JT Do?

Nonreligious
Ask JT: Religiosity at a loved one's funeral.
What Would JT Do?
TRENDING AT PATHEOS Nonreligious