Ben Carson nominated to head the Department of Housing and Urban Development.

Ladies and gentlemen, the next nominee for the Department of Housing and Urban Development will be a person with absolutely no expertise with urban development:

“I am thrilled to nominate Dr. Ben Carson as our next Secretary of the US Department of Housing and Urban Development,” President-elect Donald Trump said in a statement. “Ben Carson has a brilliant mind and is passionate about strengthening communities and families within those communities.”

What is Carson’s qualification for that? He owns a house? Oh wait! It’s housing and URBAN development, and Carson’s black, and we know from Trump’s campaign that the inner city is where all the black communities are! Yup:

“After serious discussions with the Trump transition team, I feel that I can make a significant contribution particularly to making our inner cities great for everyone,” Carson wrote. “We have much work to do in strengthening every aspect of our nation and ensuring that both our physical infrastructure and our spiritual infrastructure is solid.”

Yes, because why appoint somebody who knows shit about real estate markets when you can slide a crony into power? Drain the swamp!

It’s curious that Carson even wants to be a part of the government considering he’s compared it to Nazi Germany:

He is known for offering provocative commentary on a wide range of issues, including comparing the modern American government to Nazi Germany in a March 2014 interview with Breitbart, and saying at the Voter Values Summit in 2013 that Obamacare is “the worst thing that has happened in this nation since slavery.” 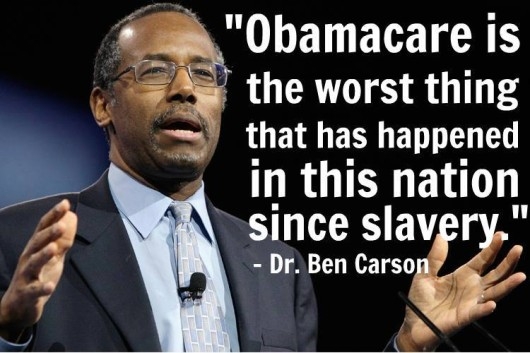 Yes, because people getting healthcare is kind of like them being owned and worked to death. Carson lacks the competence to make sensible comparisons, let alone run a federal agency.

And the mystery deepens, considering what Trump had previously said of Carson:

“With Ben Carson wanting to hit his mother on head with a hammer, stab a friend and Pyramids built for grain storage – don’t people get it?” Trump tweeted in November of 2015, when he and Carson were still rivals.

I can’t believe we get at least four more years of this shit show.

December 4, 2016
In one hour I'll be on Dogma Debate's stream-a-thon to benefit Camp Quest!
Next Post

December 7, 2016 Happy Holidays, asshole.
Recent Comments
0 | Leave a Comment
"Totally different pope. This post is nine years old."
William Holy fuck
"Meanwhile, the BBC proudly announces that the Pope will enlighten its UK audience with his ..."
Broga Holy fuck
"He was testing the new Church policy! Yeah, that's it..."
Raging Bee Holy fuck
"Is 7522 your prison number?"
Mourning Warbler Anti-gay side tells the SCOTUS we ..."
Browse Our Archives
Follow Us!

How I Learned to Focus on the Game,...
Hi and welcome back! Recently, we've been circling around the topic of...
view all Nonreligious blogs
What Are Your Thoughts?leave a comment
Copyright 2008-2020, Patheos. All rights reserved.