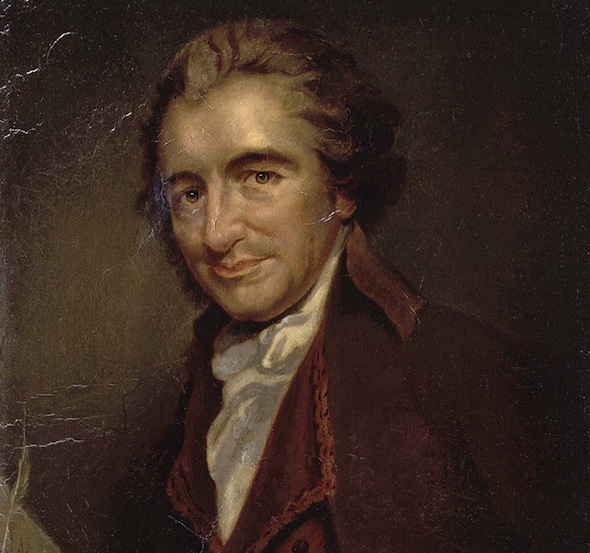 In my pursuit of historical and original sources regarding philosophy, science, and rationality, I recently picked up Thomas Paine’s The Age of Reason and a collection of his political writings. I’m already so fascinated by Paine. Then, to my delight, one of my favorite contemporary authors and social critics, Chris Hedges, himself from a religious background, wrote a short piece about Thomas Paine for Truthdig entitled, “Thomas Paine, Our Contemporary.”

There were numerous American leaders, including Benjamin Franklin, who hoped to work out an accommodation with the British crown to keep America a British colony, just as many now believe they can work through traditional mechanisms of power, including electoral politics and the judicial system, to reform corporate power. Paine, partly because he did not come to America from England until he was 37, understood that the British crown had no interest in accommodation; today, the corporate state similarly has no interest in granting any concessions. It became Paine’s job to explain to his American audience the reality of British power and what effective resistance would entail. Paine knew that the British monarchy, which wielded the global imperial power that American wields today, was blinded by its hubris and military prowess. It had lost the ability to listen and as a result had lost the ability to make rational choices. The inhabitants of New York would discover this when British warships and mercenary troops besieged the city.

I was reading this today thinking, “Why have I not read any of Thomas Paine’s writing? Then it hit me. I spent my young adults years reading Ellen White instead. White had this to say about Thomas Paine:

Thomas Paine, whose body has mouldered to dust, and who is to be called forth at the end of the 1000 years, at the second resurrection, to receive his reward, and suffer the second death, is purported by Satan to be in heaven, and highly exalted there. Satan used him on earth as long as he could, and now he is carrying on the same work through pretensions of having Thomas Paine so much exalted and honored; and as he taught on earth, Satan is making it appear that he is teaching in heaven. And some on earth who have looked with horror at his life and death, and his corrupt teachings while living, now submit to be taught by him who was one of the vilest and most corrupt of men; one who despised God and his law (Spiritual Gifts, vol 1, 175-176).

These are such strong words for someone so highly regarded in American history. But I never questioned it. I just accepted that he was “one of the vilest and most corrupt of men; one who despised God and his law.” No doubt he was so regarded by White because he despised the Bible.

So clearly, Thomas Paine was not on the top of my family’s reading list. What I now know, even from the briefest exposure, is that Thomas Paine’s critical thinking skills were so sharp and put to such strategic use that no form of established power could afford to have his words read and taken seriously. Which is why Chris Hedges says that he is a political hero that deserves our attention today. But Hedges’ admiration for Paine also comes with a sober warning.

He was, by that time, an old man, and even his former champions, in well-orchestrated smear campaigns, routinely denounced him for his religious and political radicalism. The popular press in America dismissed him as “the drunken infidel.” But Paine never veered from the proposition that liberty meant the liberty to speak the truth even if no one wanted to hear it. He died, largely forgotten, a pauper in New York City. Six people went to his funeral. Two of them were black.

May 22, 2014
Postmodern Faith: We Are Not God #throwbackthursday
Next Post

May 28, 2014 My introduction to William Lane Craig's brand of apologetics
Recent Comments
0 | Leave a Comment
Browse Our Archives
Follow Us!