Thin places and the experience of beauty

Thin places and the experience of beauty July 30, 2014 Ryan Bell

A friend brought this RELEVANT article to my attention. You’ll have to be the judge of whether it is, in fact, relevant, but it does give me the opportunity to talk about something I don’t think I’ve explicitly written about.

In the article, entitled, “How Being an Atheist Made Me a Better Christian,” Mike McHargue writes of his loss of faith when, one day while praying, he realized God was not there. Many of us can relate to this. I was eager to discover how he found his way back because as someone still in the midst of this journey, I keep wondering, is there a path back to God?

His reconversion apparently happened just as suddenly as his deconversion. McHargue writes,

God wasn’t done with me. Even though I didn’t believe in any god, God reached out to me standing on the shore of the Pacific Ocean. In that moment, reality seemed like a veil that was stretched taught. I could make out the glory of God on the other side, and it moved me. I felt connected to God, and through God to all my fellow humanity. It was beautiful, and it changed my life forever (emphasis mine).

This is not scientific evidence, of course. It is his personal experience. At one level, personal experience is useless as evidence for anything. People’s experiences are absolutely private and beyond public interrogation. At another level they are very real. Unless a person is lying (which I’ll leave aside for now), they have actually experienced something. This story confirms my theory that some people are more predisposed to faith and belief in God than others. They “see” and feel God in bits of everyday life. While some people see the majesty of God in the beautiful and terrifying ocean surf, others simply see a vast ocean and the effects of the gravitational pull of the moon, which is no less beautiful and awe-some.

Michael Shermer, in his book, How We Believe, argues that we are wired to believe in the supernatural. The fact that McHargue experiences God while standing on the beach looking out over the awe-inspiring Pacific Ocean is not surprising.

We believe in the supernatural because we believe in the natural and we cannot discriminate between the two. We create gods because we are natural-born supernaturalists, driven by our tendency to find meaningful patterns and impart to them intentional agency. The gods will always be with us because they are hard-wired into our brains.

We don’t do it all the time but there are moments, events and places where the distinctions between the visible and invisible blur. The ancient Celts call these places, “thin places.” The late Harvard theologian, Peter Gomes, writes:

“There is in Celtic mythology the notion of ‘thin places’ in the universe where the visible and the invisible world come into their closest proximity. To seek such places is the vocation of the wise and the good — and for those that find them, the clearest communication between the temporal and eternal. Mountains and rivers are particularly favored as thin places marking invariably as they do, the horizontal and perpendicular frontiers. But perhaps the ultimate of these thin places in the human condition are the experiences people are likely to have as they encounter suffering, joy, and mystery.”

I have written and spoken before about liminality. The word comes from the latin, limen, which means ‘threshold.’ There are times and places, the ancient wisdom traditions have taught, that the barrier between the known world and another world, become so thin that we experience something divine or transcendent. It’s as if we are standing on the threshold between two worlds or, as one travel writer put it, we are “jolted out of old ways of seeing the world.” If you have a heartbeat you have probably had an experience like this and it can, indeed, be transformative. But here’s the thing I’m realizing more and more this year—what one calls this experience, or what, or Who, one attributes it to, will vary based upon your social conditioning. We see what we expect to see. I remember so clearly, during an emotionally intense season of my life, taking long, pre-dawn walks in the beautiful forest behind my college, talking to God as though he were walking beside me. In those moments, my receptivity was heightened. Simple things became profoundly beautiful. A sunrise was not just a sunrise. It was an evidence of God’s love. Yes, the sun rose right when it was expected to, just like every day before and every day since, but on those days it was a miracle, full of divine generosity.

“[Your Father in heaven] causes his sun to rise on the evil and the good, and sends rain on the righteous and the unrighteous” (Matt 5:45).

My concern with this article, however, is not his experience in the thin places he describes, but the thinness of his explanation. He says, “I know I couldn’t have experienced God if He didn’t exist. I spent two years climbing back into Faith. I had to start over, learning who God is and how I can be a part of God’s work.” That first sentence just isn’t true. There are very clear ways to “experience God” without there actually being a God. Resources on this abound and since his bio says he writes about science and faith, I’m frankly surprised he wouldn’t at least reflect on this scientific body of knowledge.

Like McHargue, I relish these “thin places” where I feel deeply connected with the fabric of reality; when I know I am more than the sum of my parts. But I’m not willing, at this point, to jump to the conclusion that there is a God trying to reach me through the infinite reaches of the cosmos. I am likely to marvel, instead, at the remarkable workings of the human mind and its ability to apprehend beauty and seek after meaning.

August 14, 2014 From where will our salvation come?
Recent Comments
0 | Leave a Comment
Browse Our Archives
get the latest from
Nonreligious
Sign up for our newsletter
POPULAR AT PATHEOS Nonreligious
1

Tim Keller Pushes the Myth of...
Roll to Disbelieve
Related posts from Year Without God 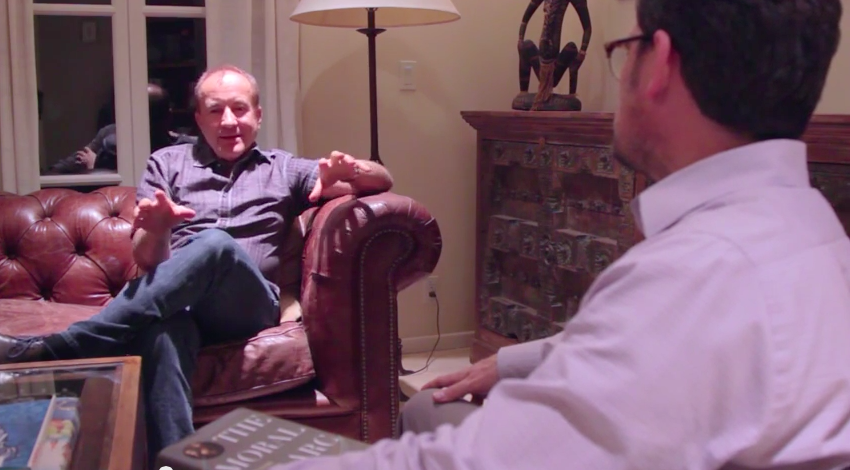 Nonreligious
A Conversation with Michael Shermer: The Moral Arc...
Year Without God
TRENDING AT PATHEOS Nonreligious