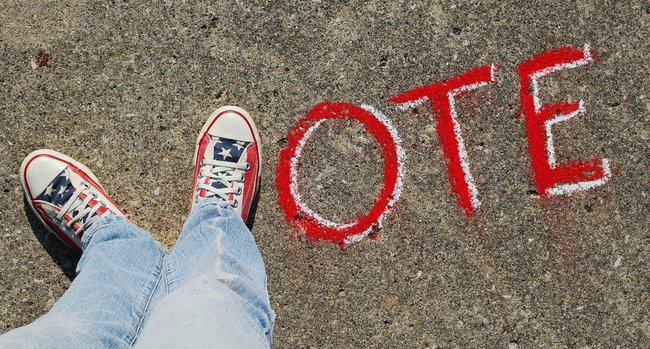 On Tuesday, Americans will go to the polls to make some very important decisions regarding the life of our democracy and everyone is vying for our attention, our money and our vote! Elections are about power: who has it and who doesn’t. People who have traditionally lacked the power to create the best life for themselves and their families can demand their share of the pie. On the other hand, those who have traditionally held the reigns of power will fight all the harder when they realize they’ve been forced to share. Case in point: Christian churches. In particular, conservative, evangelical churches, some of whom have recently gone so far as to give their church members sample ballots with the church’s preferred candidate. This is, of course, against IRS code and could result in the church being fined and losing it’s 501(c)3 status. That some churches feel entitled to do this is just one evidence of their hubris and their sense of entitlement to control the American political process.

The nuance about religion in public life, however, is this: people get their moral and political values from a variety of sources, one of which is religion. Other sources include family, school, books, civic groups, etc. What is reprehensible to me and most fair minded people is the attempt, on the part of some, to legislate unique religious beliefs and/or practices. When Christians, for example, based solely on what the Bible says about same sex relationships, seek to prohibit same sex couples from enjoying the same legal benefits as any other couple, we have a problem. Because the opponents of marriage equality have not been able to make a convincing secular argument, states are one by one equalizing marriage. This is as it should be. Were it not for religion, this would have long since ceased to be a debate.

Decisions about these matters require the careful application of our reason and our moral sensibilities—our heads and our hearts. For years, when I was a pastor, I championed causes of justice and peace and anchored those convictions in my reading of the Bible. The Hebrew prophets demanded justice from those who would use dishonest scales and Jesus overturned the tables of the money changers in the Temple court to express his anger at the rich and privileged fleecing the poor in the name of God. These stories fired my conscience and animated my teaching. The problem is that other pastors, with a different reading the Bible, rallied their congregations to oppose a woman’s right to choose, deny LGBTQ people the same protections under the law, and maintain Christian hegemony in the United States. Try as I might, I could never escape the feeling that the Religious Right and the Religious Left are mirror images of one another—”using” the Bible for their own political agendas. Just because I agreed with the Left more frequently than the Right didn’t mean that both sides couldn’t make their point from the Bible. Naturally I felt my reading of the Bible was more “faithful” and “true” to the original intent, but I could never escape the fact that the Bible could be interpreted in such a way to endorse a sort of theocratic agenda. Just last week I heard a pastor quote Proverbs 14:34,

Righteousness exalts a nation,    but sin is a reproach to any people.

Of course, righteousness means obeying the Christian God and sin is defined by anything that goes against the will of God, as taught in the Bible.

Having left the church I am able to see more clearly the mimetic nature of the religious left and right. What is also clear to me is that our democracy still needs to wrestle with the notion of the “common good.” Our system of government attempts to honor the wishes of the majority while protecting the rights of the minority. This is a tension well worth struggling for. People for whom the system is working well need to think not only of their own interests but also the needs and interests of others. Often, the two are not as far apart as they may seem. When it comes to public education and access to health care, for example, healthy, well-educated people are a public good for our whole society.

As our country continues to pluralize, Christian conservatives, who for decades could take for granted that their values were the values of the entire country, feel the country slipping from their grasp. These Christians—generally middle to upper-middle class, conservative, white, Christians—are afraid that everything they worked so hard to build is being destroyed. And so, efforts of the conservative churches today to control the political process is the last gasp of a world that is fading away. It even makes sense that they would perceive their loss of control as persecution.

One thing we could all do, if we care about our democracy, is get out on Tuesday and vote. And if you really care about democracy, work to get traditionally disenfranchised groups within your community out to the polls. Instead of trying to stack the deck, let us fight for the rights of those whose voices are currently not being heard!

October 11, 2014
Malala Yousafzai, Kailash Satyarthi and the importance of religious reform
Next Post

November 7, 2014 With less than two months to go...
Recent Comments
0 | Leave a Comment
Browse Our Archives
Follow Us!