Sorting through the categories 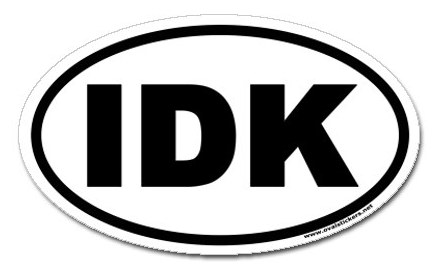 A comment I’ve heard frequently this year, but especially now as the year comes to a close, is this—

For progressive Christians and for the Spiritual-But-Not-Religious types, this gives them to ability to agree with me. As long as I’m only questioning the utility of religion, there is a vast group of Americans ready to say, “Amen!”

“You’re not an atheist, you’re an agnostic.”

Once again, this gives the host of self-proclaimed agnostics (variously defined) the ability to agree with me. For months I’ve tried to avoid getting into yet another agonizing thread about the definitions of terms but I think at this juncture it’s important to clarify what I mean. When I try to fully explain myself in a couple of days I’d like it to be clear what I’m talking about.

But first, I feel I should offer this aside about language. There are two important concepts that need to be held in tension.

First, words mean whatever we say they mean. That is, there is no objective meaning or pristine linguistics that we all must hew to. The meanings of words change as culture changes. New words are added. Others words fall into disuse. I am entirely unsympathetic to the notion that words have to mean one thing and only one thing forever and ever. No one actually uses language in this way anyway. It is interesting to know how the word “atheist” was commonly used when Albert Einstein, or even Carl Sagan, used it, but that doesn’t mean it must be used in the same way today. Or holding Einstein to the usage of “atheist” that we employ today is only a thinly veiled tactic to enlist him to one side of the argument

Secondly, people cannot simply make up meanings for words and expect to be understood. The goal of any communication is understanding. The shortest path to understanding is to choose symbols (in this case, words) that will best facilitate that objective. That will be my goal here. If you use these words in a slightly different way, that’s fine, but if you want to understand what I’m saying, please refer back here.

Religion is fundamentally a practice that helps people to look at the world as it is and yet to experience it — to some extent, in some way — as it should be. Much of what people actually do in church—finding fellowship, celebrating birth and marriage, remembering those we have lost, affirming the values we cherish—can be accomplished with a sense of God as metaphor, as story, or even without any mention of God at all.

The book that got my Year Without God started was Ronald Dworkin’s little book by the same title.

Human beings are almost incurable religious. I tend to agree with Luhrmann and other anthropologists who suggest that religion doesn’t necessarily have anything to do with the supernatural, though the common usage of the word, and nearly all dictionary definitions, refer to a system of practices invoking God or gods. If we exclude all atheistic gatherings that appear religious but have no reference to supernatural beings or experiences, what do we call these? Isn’t Sunday Assembly and other weekly gatherings of atheists, freethinkers and skeptics somewhat religious, broadly speaking? The other function of words is to differentiate things. Lumping too many things together into one word causes confusion. The risk in referring to Sunday Assembly as a religion is that it doesn’t sufficiently distinguish it from typical religions. On the other hand, much of Buddhism does not have a god-concept and we definitely think of Buddhism as a religion.

I suspect that the  linguistic grey area of “religion without god” is indicative of the way the religious landscape in American is changing. We don’t even have adequate words to describe what we’re witnessing.

I want to spare all of us (but mostly me) the pain of rehashing what is available on every thread I’ve ever read on atheism, but a brief bit of clarity is in order here.

As best I can tell, atheism in its contemporary usage, is a fairly low barrier label. It simply means the absence of belief in a god or gods. It is not the positive affirmation that no gods exist, but the negative affirmation that an individual does not believe any gods exist. The reason for this is fairly straightforward. Since the god hypothesis is impossible to either prove or disprove, there would be virtually no atheists if the requirement were certainty that no gods exist. If we called all these people agnostic, that doesn’t really help either (for the reason of differentiation mentioned above).

Agnosticism is, likewise, a hotly contested term. Its most precise meaning refers to a person’s attitude toward knowledge claims, or epistemology. To be agnostic is to assert that certain claims, especially metaphysical claims, are impossible to know one way or the other. The truth of these claims is just impossible to access. Technically, then, agnostics with reference to God, are those who believe it is impossible to know whether God exists or not. Agnostics are hung on the horns of the dilemma and feel that God’s existence is something like a 50/50 proposition.

It’s tempting to refer to myself as an agnostic because my posture toward truth claims is, in general, agnostic. Plus, it’s fashionable to be agnostic—to withhold judgment. Atheism is still a word laden with negative baggage. People try to avoid it because they fear getting painted into a corner.

Many self-proclaimed agnostics that I encounter would probably better be referred to apatheists—people who aren’t that interested in the conversation at all. They are apathetic about the question.

I rarely find the label, agnostic, helpful. It usually means people are simply ‘punting’ on the question. The question of God’s existence is about probabilities rather than certainties and very few people land right in the middle, feeling it could go either way. If you are one of those, then you are rightly, an agnostic. You genunitely don’t know. But most of us, if we’re honest, lean one way or the other.

The other way to look at these two words is in a matrix with two axes, as seen in the diagram below. 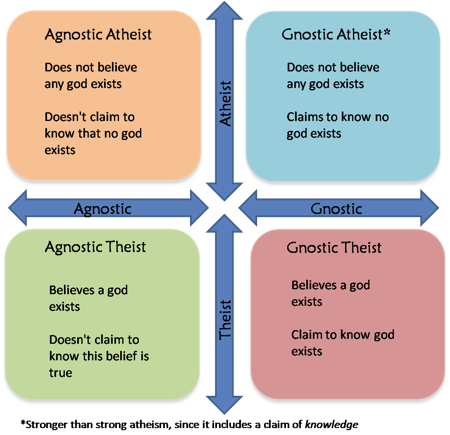 Humanism is a completely different thing altogether. Humanism is an ethical and philosophical stance that has very little to do with metaphysical claims. According to the American Humanist Association‘s website, “Humanism is a progressive philosophy of life that, without theism and other supernatural beliefs, affirms our ability and responsibility to lead ethical lives of personal fulfillment that aspire to the greater good of humanity,” but there are also religious humanists who are sometimes also theists.

It seems to me that these terms, and others can combine in some interesting ways that make the binary theist/atheist just the beginning of the story.

Religious but not spiritual

As the category “spiritual-but-not-religious” has grown in popularity (even as understanding of what it means is tenuous at best) I have felt an odd move the other direction. In fact, when I was a pastor I used to joke that I was religious-but-not-spiritual. As I’ve said many times, I’ve always felt more comfortable with religion than spirituality. Spirituality is that fuzzy realm in which nearly any metaphysical experience is admitted and no experience is falsifiable. Religion, on the other hand, was the meaning making enterprise—rituals, poetry, service, community—with an eye to being intentional about being human and living in love and justice. Spirituality is abstract and intangible. Religion is physical and earthy.

Even now, having left my faith behind, I am not entirely bearish about religion, broadly defined. I think, for instance, that groups of people gathering on a regular basis, giving focused attention to how to live and love well, and organizing themselves together to do good in the community, is good. You may not want to call that religion, but whatever you call it, once we leave traditional, theistic religion behind, there aren’t many secular opportunities for that sort of gathering. It’s my feeling that we will not accidentally become more generous, more honest, more self-reflective, better spouses, parents and neighbors. Like any other skill we care to develop, these qualities take practice. Intentional communities are one important way to foster these virtues.

I offer the following chart as a work in progress. I started making it for my own purposes, just to help sort through the categories and differentiate between theism, religion, ethics and so forth. I’ve changed it a lot and I’m still not happy with some of these categories but it really does depend on which group you’re talking about.

I’m curious what you think about it.