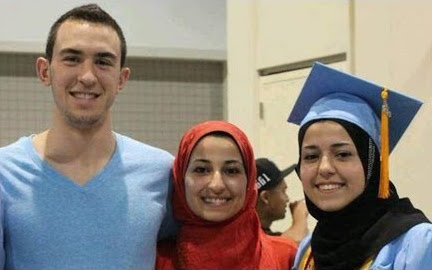 There has been a great deal of soul-searching in the past 24 hours around the triple homicide in Chapel Hill, North Carolina. It’s so upsetting that I almost can’t make my fingers do this typing but I think it’s important. It’s possible you’ve read exactly what I’m going to say here somewhere else, but I want to say it anyway.

As many philosophers, social scientists and even theologians, have pointed out, religions tend to intensify in-group loyalties and out-group hostilities. This tension can reach a boiling point as the culture and worldview of one group clashes with another.

However, religion is not the only thing that can create these in-group/out-group hostilities. Political ideologies, nationalism, and even sports team rivalries can and do erupt in violence. I remember when I lived in Philadelphia, whenever the NY Giants came to town, several fans typically went to jail for violent assaults on other fans. In fact, the old Veterans Stadium had jail cells in the stadium for just such occasions. Here in Los Angeles, San Francisco Giant’s fan, Bryan Stow, was beaten nearly to death by two Dodgers fans in 2011.

The difference, however, between being, say, Christian and being a Dodgers fan is that Christians have a holy book with lots of divinely sanctioned violence in it. The Dodgers have no such book. There is nothing in the history or contemporary practice of baseball that would indicate violence (the same could perhaps not be said for football). On the other hand, religious fundamentalists who read holy scriptures as literally as possible intensify in-group loyalties and out-group hostilities in striking and consistent ways.

The question on my mind the past few months as new accusations about the sources of violence have been making the rounds is this: can atheism be an ideology that would create the same in-group/out-group problems that we see in religion? I think the answer is yes. If it turns out that Craig Hicks was motivated by hatred for religion then these three tragic deaths will indeed be a hate crime. This seems likely given the images on his Facebook account. This doesn’t mean that atheism is a religion or should be thought of as a religion, but it can function like a religion when it gathers likeminded people together under an ideological banner, fosters in-group loyalties and stokes out-group hostilities.

None of this, in my mind, means that we should expect atheists to kill people. I’ve frankly never heard of a situation like this. I suspect it is very rare and deeply influenced by many other factors in this man’s life. Perhaps time will tell the real motivations in this case. Perhaps we’ll never know. Either way, I think this is an important moment for deep introspection on the part of atheists. Ideology can lead to violence. Even atheist ideology.

Naturally, ideologues everywhere are using this tragedy to score points for their team (you see how this goes?) My fellow Patheos Atheist Channel blogger Dan Arel reported earlier today that CJ Werleman was up to his usual unsavory rhetorical shtick, saying that Sam Harris and Richard Dawkins have the blood of these three young Muslims on their hands. This is absurd. As Sam Harris has made clear repeatedly, there is an enormous difference between criticizing bad ideas and vilifying an entire group of people. (UPDATE: CJ Werleman wrote to say he deleted that Tweet shortly after posting it. He felt it was wrong and took it down).

Others, feeling the shame of one of their own committing such a heinous crime, said atheism had nothing to do with this. I’m skeptical about this as well. The violence committed in the name of Islam in recent days is having a mirroring effect in other parts of our culture. Criticism of the bad ideas found in the Quran can and does bleed over into the vilification of Muslim people, which can, when combined with other circumstances like neighborhood grievances, stress or mental illness, lead to violence.

None of this means that atheism is inherently violent. But atheists should not be caught engaging in the ever popular No True Scottsman fallacy by saying that “real atheists” are not violent. Atheists hold many other ideological commitments in addition to their conviction that there are no gods. What is true is that there are no atheists leaders or atheist sacred texts that are calling disaffected atheists to commit violence the way Muslim leaders use the Quran to call disaffected Muslims to commit violence. This is an important difference between religion and non-religion, but this tragic episode is, I think,  a cautionary tale for atheists. We would do well to focus on what we are for, not what we are against. There will remain plenty of things to be against and good people must resist the bad influences in society, but I always advised my congregation that we would be better off lighting a candle than cursing the darkness. Rather than letting violent ideologies set the agenda, humanists of all types should re-commit themselves to peacemaking—to minimizing and ultimately eliminating ideological walls that ultimately lead to violence.

If you’re as sickened by this tragedy as I am, I hope you will join in supporting Foundation Beyond Belief’s “Drive to Honor the Victims of the Chapel Hill Shooting.” All donated funds will go directly to the Syrian American Medical Society Foundation to honor the lives and celebrate the memory of Deah, Yusor, and Razan. Please give generously!

February 10, 2015
Bertrand Russell on the good life
Next Post

February 15, 2015 I'm headed to Texas
Recent Comments
0 | Leave a Comment
"The reason why you no longer believe in God, is not by your experience along ..."
25 Two Years Without God
"I did read about the bloggers a couple of years back. It was sad. At ..."
RichardfromEngland Being an atheist in Bangladesh
"The Bangladeshi constitution is you're guide, since Bangladesh was founded a republic and not an ..."
RichardfromEngland Being an atheist in Bangladesh
"No sex, no motorcycles, no competition as to whose bike is better, no women, there ..."
Josmar The empty promise of eternal life
Browse Our Archives
Follow Us!