Are atheists the most hated group in America? 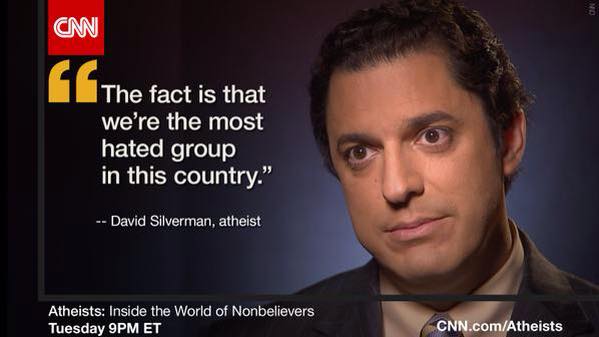 So, I started a bit of a kerfuffle over on my Year Without God Facebook page last night when I posted this image above with the caption,

Can we cut the martyrdom complex? It’s not a competition.By the way, I’m doing just fine compared to the poor, the homeless and the immigrants in my community.

I know David. He’s a wonderful person and I know he’s just doing his job, but this is imprecise and, more importantly, unhelpful.

Let me start by saying that I have been the target of a great deal of hatred and mistrust as a result of my deconversion. I have an email folder dedicated to hate mail. I have lost friends and feel somewhat estranged from family. My ex-wife forbids my children to accompany me to my public lectures and other events. I get it. Atheists aren’t winning any popularity contests.

It’s also true that recent studies show that the public’s views of atheists are quite negative. A recent Pew Research Center study showed that Americans had the “coldest” feelings toward Muslims and Atheists. Interested bedfellows, indeed, at the bottom of the thermometer!

We all know about the 2012 Gallup poll that revealed that atheists came in dead last among people Americans would feel comfortable electing President of the United States. People would sooner vote for a Muslim than an atheist, according to Gallup.

I suppose the accuracy of Silverman’s quote above hangs on how we use the word “hate.” In my home, growing up, hate was a bad word. As a result I rarely use the word. In my personal lexicon, hate indicates an extreme revulsion–otherizing the hated person such that I desire their downfall. On the other hand, the dictionary is more modest. Merriam-Webster defines hate as,

a : intense hostility and aversion usually deriving from fear, anger, or sense of injury
b : extreme dislike or antipathy : loathing <had a great hate of hard work>

Without a doubt atheists are among the most misunderstood, distrusted, and disliked group of people in America. This is due in part to the small numbers of atheists and, like any minority group, the misinformation that is spread about us.

Perhaps Silverman is justified in using the word “hate” in the quote above. It isn’t technically wrong according to these polls. And I admit I don’t know the context of what he was talking about when he said it. But from my vantage point, as someone who works at an agency that serves the working poor and homeless, I have never met a more reviled and completely discarded group of people than the homeless. I would much rather use my time, energy and influence to take up for them than to complain that I am a member of the most hated group in America because I don’t believe in  God.

Another way to examine who is most hated in America is to examine the statistics about hate crimes. By this reckoning, Jews are far and away the most targeted for hate crimes and hate crimes against atheists are barely discernible. I’m not sure what to make the discrepancy.

I recognize that I have it easier because I live in Los Angeles. I receive daily emails from atheists around the world–out and closeted–describing the fear they live with. I’ve been told that the coming out process is not unlike coming out as gay, lesbian, bisexual or trangendered. I fully realize that in my part of the country, with my other privileges intact, I may not feel the full impact of the hatred directed towards atheists. I am also frustrated when evangelical Christians continually claim that they are being persecuted.

I guess the main reason I dislike this type of statement is not because it’s not factually true on some level, according to the surveys we’ve all read. It is because it further deepens the divisions in our country. By playing the “who is more persecuted?” game we engage a level of discourse that should be beneath us. I used to be a member of a religious tradition that loved to talk about its minority status and publish headlines about workplace freedom violations due to Sabbath observance. These were normally true, but they fed into a narrative–“we are an embattled people.”

Rather than complain about how hated we are, wouldn’t it be inspiring if atheists would show that this hatred is unwarranted by our actions of solidarity with the truly despised of the earth: the poor, the undocumented, the homeless. These folks will never make it into a Pew Survey. They’re beyond being hated. They’re not even recognized as people.