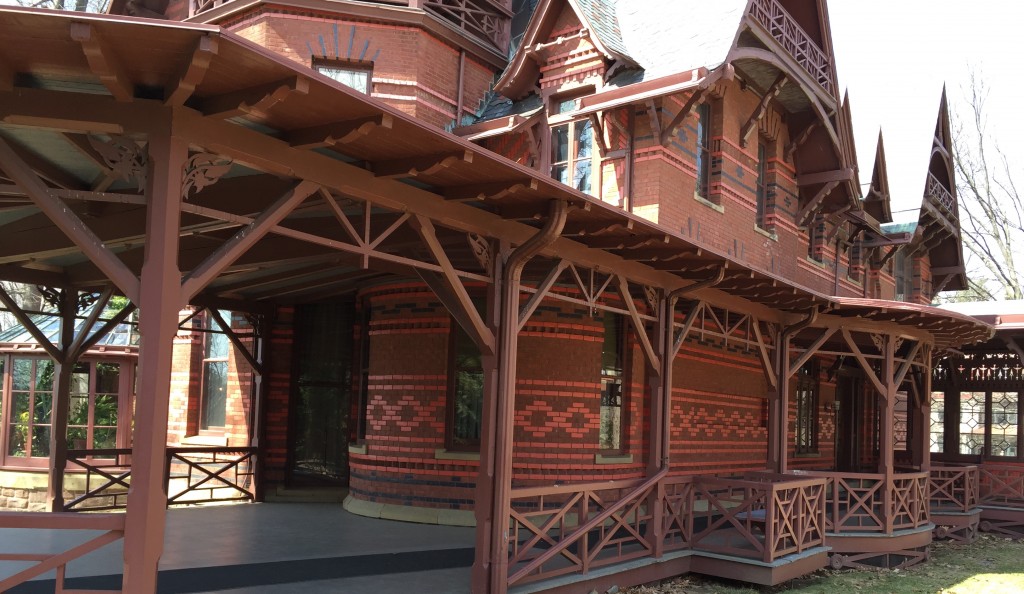 I’m completely geeking out right now! I’m sitting at the Mark Twain House in Hartford, CT (actually, in the Carriage House next door) where I’m speaking tonight at 7 pm about my Year Without God. I’ve spent a fair bit of time with some of Mark Twain’s writings about religion over the past year. A few days ago I posted a link on my Facebook page to a piece entitled “Bible Teaching and Religious Practice” from Europe and Elsewhere.

“The Christian Bible is a drug store,” he writes. “Its contents remain the same; but the medical practice changes. For eighteen hundred years these changes were slight – scarcely noticeable. The practice was allopathic – allopathic in its rudest and crudest form.”

Twain then takes this medical analogy further as he describes what he sees as one of the primary problems with religion.

Not only do foreign religions appear unbelievable or irrational to those who hold to the local religion(s), even those within the same tradition find those of previous eras ignorant and superstitious. To illustrate this principle he examines the situation of slavery so familiar to Twain himself, growing up as he did in the American South in a slave holding family.

The methods of the priest and the parson have been very curious, their history is very entertaining. In all the ages the Roman Church has owned slaves, bought and sold slaves, authorized and encouraged her children to trade in them. Long after some Christian peoples had freed their slaves the Church still held on to hers. If any could know, to absolute certainty, that all this was right, and according to God’s will and desire, surely it was she, since she was God’s specially appointed representative in the earth and sole authorized and infallible expounder of his Bible. There were the texts; there was no mistaking their meaning; she was right, she was doing in this thing what the Bible had mapped out for her to do. So unassailable was her position that in all the centuries she had no word to say against human slavery. Yet now at last, in our immediate day, we hear a Pope saying slave trading is wrong, and we see him sending an expedition to Africa to stop it. The texts remain: it is the practice that has changed. Why? Because the world has corrected the Bible. The Church never corrects it; and also never fails to drop in at the tail of the procession – and take the credit of the correction. As she will presently do in this instance.

The Church…never fails to drop in at the tail of the procession – and take the credit of the correction. How true!

All this brings to mind the Religious Freedom Restoration bills that are, once again, in the headlines around the United States. Indiana has been “leading” the way with a bill that gives license to discriminate against LGBT individuals (and others). Arkansas also entered the fray. We’ve seen this before in Arizona and the claims made by Hobby Lobby. Fortunately, the backlash has been swift and, thus far, successful. The overreach of Indiana has now come back to bite them, resulting in the state’s first ever specific protection of LGBT individuals from at least some discrimination. Bravo!

These efforts to legislate discrimination against LGBT individuals are driven primarily by Christianity and Christian theology—the same theology that drove discrimination against African Americans, up to and including slavery. Still, the church changes its practices but never its holy texts. How much more hermeneutical twists and turns can Christian theology take before it just admits that the Biblical texts are human creations? How much more injustice must we endure for which religious authorities claim innocence?

March 24, 2015
Are atheists the most hated group in America?
Next Post

April 14, 2015 Adventist "Holy Sexuality Conference" cancelled
Recent Comments
0 | Leave a Comment
Browse Our Archives
get the latest from
Nonreligious
Sign up for our newsletter
POPULAR AT PATHEOS Nonreligious
1