Especially on social media. For all of his intelligence, and apparent earnestness, he has a tendency to type out some pretty horrendous metaphors and some appalling 140-character verse. Like this beauty the other day: 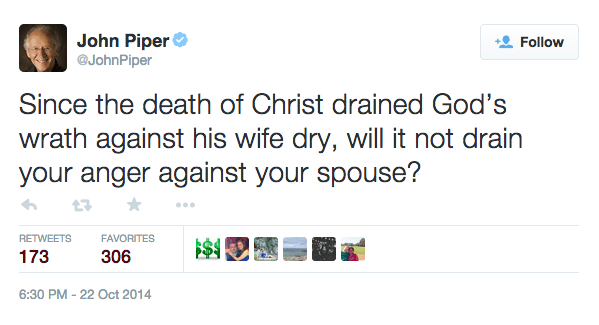 One can certainly see the hyper-neo-Calvinist train of thought here to the tune that God’s wrath toward the totally depraved elect is “drained” as he pours it out on Christ in his torture, suffering, and death. This penal substitutionary battery (PSB) is troubling enough in itself, but it is doubly so when Piper decides to mix in Paul’s metaphor of the church as the bride of Christ…and then makes a nauseating practical application. Apparently, God’s wrath was set to be drained onto his wife (or Christ’s wife, depending on trinitarian nuances, whatever), but it was drained on Christ instead, so maybe your wrath toward your wife can be drained by Jesus’s death too?

This metaphorical turn of phrase turns penal substitutionary battery into spousal battery specifically, which, in the very least, doesn’t make it sound much better!

Much worse, in fact, as it presents the underlying assumption that a similar wrath that would manifest in the torture and murder of Jesus might exist in us toward our spouse – and, as God’s wrath was in the PSB formula, be in some way justified.

The next day, in an apparent show of support, Tim Keller tweeted this, RT’d by Dr. Piper: 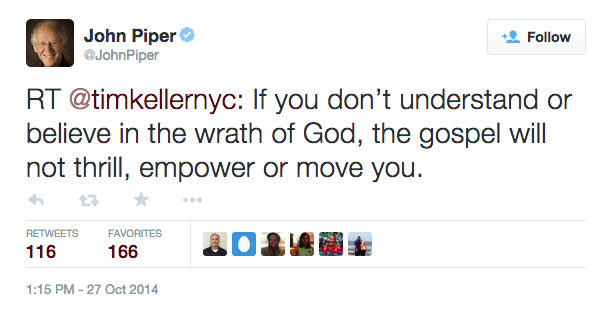 And I couldn’t agree more with Tim Keller’s sentiment that God’s wrath, properly understood, makes the good news about King Jesus truly moving. That is, we must understand that the wrath of God is most definitely not divine wife-beating, however poetic Piper thinks such a sentiment to be (yikes).

In the hopes of reaching greater understanding, here are three other things God’s wrath cannot be:

1. God’s wrath cannot be violent. I realize that eliminates the entire PSB model in one fell swoop (and doubtless earns me a heretic badge), but I believe that God is like Jesus, God has always been like Jesus, and maybe we haven’t always known this, but now we do (thx BZ). I also realize that there are passages, in the OT especially, that seem to contradict this, with God directly perpetrating some kind of violence or killing (the Flood perhaps, Job’s family, Uzzah steadying the ark, etc.). But it should be said that most biblical examples of the wrath or judgment of God don’t entail God perpetrating violence directly. That is, the wrath of God is mediated or made manifest through other means (conquering armies, natural consequences, comeuppance, etc.).

While a superficial reading might assume that God is a divine puppeteer directly making these violent consequences happen, Jesus-centered interpretation shows us something else. Namely that, yes, God can be justifiably angry about destructive sin like idolatry, arrogance, and injustice/oppression (because he loves his good creation), but he then gives resistant groups and systems over to the built-in consequences of their choices (because he gives genuine freedom). In other words, Jesus rejected violence and preached forgiveness. Jesus got angry at injustice without (violently) sinning. And God is like Jesus.

2. God’s wrath cannot be personal. This may be less obvious, but the personal spousal abuse metaphor that Piper ascribes to the wrathful atonement, mirrored by one’s personal wrath toward their spouse, just doesn’t get the way the biblical narrative is written. The Bible is not about individual spiritual transactions. The Bible is the story of a people (Israel) in relation to a system (empire). The NT doesn’t change this corporate dimension either – Jesus is Israel’s Messiah, their Liberating King, and his salvation is the kingly redemption of a people and a realm. It may not be ethnic Israel that finally defines the people of God in Christ, but it is still a people. The gospel itself is the reconstitution of the people of God, faithful Israel plus all who have been previously excluded, now reconciled in Jesus.

Likewise, the wrath of God comes upon the children of disobedience, the children of wrath, the group, the corporate people committed to the destructive way of empire and refusing the door to the new sheepfold, the narrow path to new, kingdom life as the people of God. And God’s wrath comes, again, not as personal violence, but simply as a giving over to built-in consequences, whether now or at the final reckoning. PSB be damned.

3. God’s wrath cannot be abusive (excessive, destructive, unjust). This is, of course, the most grotesque element in Piper’s little poem. The torture and murder of Jesus represents an abusive, excessive, destructive, and unjust brand of violence – the worst kind the empire can muster, really. And the eventual torture of the entire nonelect human race in hell (the “wrath” that is supposed to make the gospel “thrill” us, per Keller and neo-Calvinist formulas) is likewise completely excessive and unjust. But if God is like Jesus, then God’s anger toward destructive sin is perfectly just and proportional and fitting and never excessive or indulgently vengeful. The wages of sin is a proportionate degree of destruction and death, now or at the final reckoning: that’s just the wages that sin naturally earns, a just recompense of reward for actions freely chosen, not a cruel and unusual violence forced upon humanity by the Divine.

God’s anger toward sin and its wages is born out of his love for people and creation and his desire to protect the innocent and bring about flourishing.

Which is to say, because God is like Jesus, God is not a divine wife-beater.

And understanding what it IS like certainly makes the good news – that I am among the people being graciously rescued from this present evil age – thrilling indeed.

October 27, 2014
Believe Something Already: Emergent, LaBeouf, & the Growing Senselessness of Doubt
Next Post 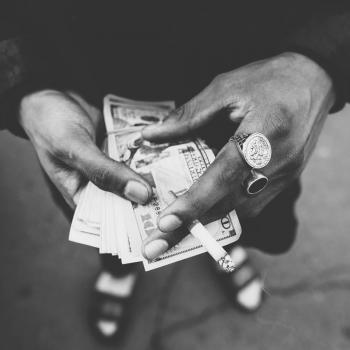 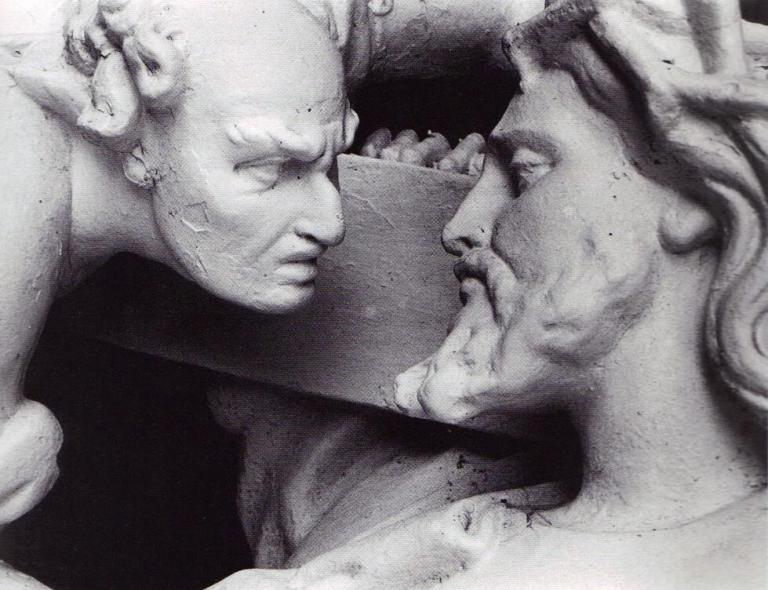