Read an Excerpt From "A Shaman's Miraculous Tools for Healing"

My reverie was disturbed by the small talk. I took a deep breath and cleared my throat, wanting my voice to belie my nervousness. I put my hand to my forehead, between but slightly above my eyes. That spot. His eyes were focused on me. I felt seen. He really wants to know. I shifted in my chair, willing myself to disappear, feeling incredibly vulnerable. Tears burned behind my eyes, but I pulled the veil of the professional woman over my face and the tears retreated. I faltered—my voice had to be there somewhere! Then I said, "It's, well, it's my head. Just a headache."

"Just? You came all the way from—"

"Well, no, not just!" Irritation charged within me, and I could hear my voice rising. Stay in control, Andrea! I had been in so much pain for so long that my anger was at the surface.

I could feel his genuine interest. I felt he would truly listen, and acknowledge that the chronic headache was the messenger who had directed me here. In fact, he never took his eyes off me, and he listened to more than what I said; he listened to what lay buried beneath the words.

"What are you sensing?"

I reached up with my hand again. "A knife . . . hot, searing, reaching deep, unrelenting." The tears slipped and fell, the veil falling away.

"Is there anything like this in your family history?" Apparently, tears did not distract the shaman.

I was taken aback by his question. "Come to think of it, yes! I've had relatives with brain tumors and aneurisms. My grandmother, my Aunt Jane. But surely it's not the same. You see, I've had all kinds of tests. All that's been ruled out." A distressing and involuntary wail was coming into my voice. "That's why I'm here! I'm left with just, yes, just a headache." A frown furrowed my brow as I added, "No, no . . . it's more than that. It's affecting my life! It's devastating!" I leaned forward in the leather recliner and looked straight at the shaman.

Alberto nodded with understanding as his eyes held mine. "Relax, Andrea, let everything go." I lowered the chair into the reclining position and closed my eyes as he instructed. "Breathe deeply, in through your nose, out through your mouth."

The shaman began to shake a rattle in a steady rhythm, a soothing sound that slowly resolved my tension. Soon, I grew still and entered a timeless place within. I don't know how many minutes passed before I heard him say, "You can open your eyes now."

For a minute or so we sat in a comfortable silence, finally broken by his words. "I don't see this very often."

My heart gave a small jump. "See? See what?"

"It's your sixth chakra, the third eye of inner sight." He reached up and touched that same spot on his forehead, the spot between the eyes. "It's split, Andrea. Chakras can be damaged in many ways, but this is unusual—especially since a chakra is an energetic structure, a spinning vortex of light. Yours has a gap right down the middle."

Now I had to take that in. A split chakra? What in the world does that mean? "Well, that certainly never entered my head!" I even managed a smile. "Could that be causing the headaches?"

"Yes, that's possible." The shaman looked thoughtful, as though searching his mind. "The first question I have for you is, What did you see that you should not have seen?"

Silence hung in the air. The question hit me squarely between my eyes. I had no answer. "I don't know! My life's been a good one. Good home, good parents. I felt loved. Nothing terrible ever happened to me." I sighed. Was this a problem—not having a clear source of trauma?

"Sometimes we bring things into the world with us." He smiled as if he knew something.

But what? I had no idea.

"For now, I want you to start attending to that split chakra. Massage it gently and lovingly. Do it with awareness." He got up abruptly and retrieved from a bookshelf what he identified as a red-tailed hawk feather.

"That's curious!" I said, a memory flooding back. "I've seen a red-tailed hawk on my lawn twice this past week!" I thought this highly improbable—beyond mere coincidence.

"Hmmmm . . ." was his only comment. He was focused on his work. Twirling the feather clockwise about my forehead, lightly brushing my brow, he asked, "What are you seeing?"

My eyes were closed, but I could see black lines and changing colors. "I see two yellow circles!"

"Align those circles. Bring the two together. Visualize it. See them merge into one." Then, he carefully placed the feather back on its resting place. His voice became deeper as he said, "I see more than a split chakra here, Andrea. You need to step back into your destiny. You've become caught in the grip of fate, living a life that was not meant for you."

It was at that moment that I knew something was about to change—not in my forehead, particularly, but in my life. 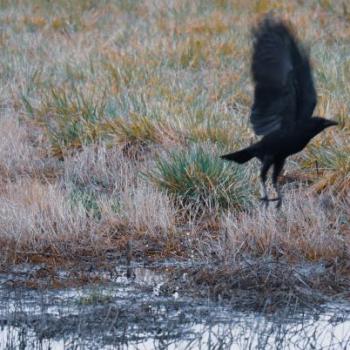 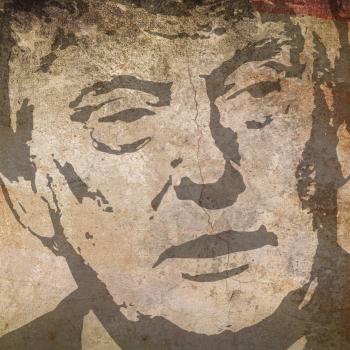 Party of Values, My Left Behind
Matthew Distefano
4 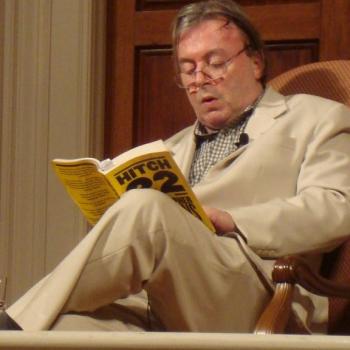 Hitchens's Razor vs Bayes's Theorem
Jonathan MS Pearce
Get Patheos Newsletters
Get the latest from Patheos by signing up for our newsletters. Try our 3 most popular, or select from our huge collection of unique and thought-provoking newsletters.
From time to time you will also receive Special Offers from our partners that help us make this content free for you. You can opt out of these offers at any time.
see our full list of newsletters
Editor's picks See all columnists