When Amy Andrews and Jessica Mesman Griffith met in a creative writing class in graduate school, they both confessed to writing about God. They bonded one night while reading the Book of Ruth and came to truly understand the unlikely friendship of Ruth and Naomi. In these two Old Testament women, they witnessed a beautiful spiritual friendship and a way of walking with one another toward God.

But how could they travel this path together when they would be separated by distance and time and leading busy lives as they established marriages and careers? They decided to write letters to each other—at first, for each day of Lent, but those days extended into years. Their letters became a memoir in real time and reveal deeply personal and profound accounts of conversion, motherhood, and crushing tragedy; through it all, their faith and friendship sustained them.

Told through the timeless medium of letters—in prose that is raw and intimate, humorous and poetic—Love & Salt is at its core the emotional struggle of how one spiritual friendship is formed and tested in tragedy, tempered and proven in hope.

jpg" style="width: 100px; float: right; margin: 4px 8px;" title="Amy Andrews">Amy Andrews has an MFA from the University of Pittsburgh and her spiritual writing has appeared in Creative Nonfiction, River Teeth, and the Bellingham Review. She teaches mathematics at Northwestern University and lives in Evanston with her husband and two children.

Jessica Mesman Griffith has an MFA in writing from the University of Pittsburgh and has published essays in Elle, Creative Nonfiction, and Godspy. She lives in Virginia with her husband, writer David Griffith, and their two children.

Druid in the City: Sing the Song of Life
Victoria S.
2 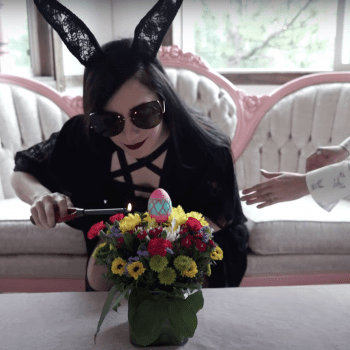 Goth Easter Gifts
Andrew Hall
Get Patheos Newsletters
Get the latest from Patheos by signing up for our newsletters. Try our 3 most popular, or select from our huge collection of unique and thought-provoking newsletters.
From time to time you will also receive Special Offers from our partners that help us make this content free for you. You can opt out of these offers at any time.
see our full list of newsletters
Editor's picks See all columnists