Jehoshua: About the Series and Author

About the Book Series

The Jehoshua book series is a unique interpretation of early Christianity. Combining recent scholarship on the historical Jesus, with Biblical references and fictional characters and circumstances, Garrett Glass provides the reader with a fascinating perspective on how Jewish and Roman culture influenced the fate of a small group of Jews and Gentiles who worshipped Jehoshua the Christos, whom we have come to know as Jesus Christ.

Unlike devotional books which strictly follow the Gospel interpretation of Jehoshua's life, the Jehoshua series adopts a respectful but sometimes skeptical view of what is told in the Gospels. The focus is on the important individuals who spread the message of the Christos after his death—men like Peter and Paul, and women like Mary Magdalen. There was no agreement among the early Apostles and followers of Jehoshua as to the meaning of his teaching, or even the reality of his resurrection. Nonetheless, devotion to his message, as well as to his prospective return to earth, spread rapidly throughout the Roman Empire.

Book One of the Jehoshua series covers the first 25 years of Christianity, from the execution of Jehoshua (Jesus Christ) to the departure of Paulus (St. Paul) to Rome to defend himself against charges of insurrection.

Using a mix of fictional with historical and Biblical characters, Glass explores the controversies that arose among Christos followers as to whether Jehoshua was resurrected in bodily or spiritual form. The reaction of Jewish authorities to this new sect of Jews was immediate and violent: the establishment felt threatened by a cult many viewed as heretical to Jewish teachings. We meet as well Yakov (James), the brother of Jehoshua, who is obligated to take over the Jerusalem community of followers, and who in Book Two will be brutally murdered by the Jewish Sanhedrin, thirty years after the death of his brother.

In part four of the novel, we travel to Egypt to accompany a young man named Marcus on a journey up the Nile to Luxor and Karnak. There he discovers a priest who recounts the story of Jehoshua as a young man in Egypt learning hidden secrets of magic from an Egyptian priest. When this is discovered, Jehoshua is condemned to die in the desert, but manages to survive and return to Galilee.

The next event in the book takes place several years later in Jerusalem. At a synod of Christian leaders, men come from around the Empire only to discover the greatest leaders in the movement - Simon Petros (St. Peter) and Paulus - have deep philosophical disagreements about Jehoshua's teaching, and abiding personal anomosity. The novel closes with Paulus in darkest despair over the failure of his mission as a proselytizer, and the dangers it represents to others. He doubts that he can carry on any further.

Book Two is due out soon, titled Jehoshua: Conflagration, and this novel will plunge the reader into the drama and tragedy of the Jewish Wars against Rome, culminating in the complete destruction of Jerusalem. With the Jewish establishment destroyed or in exile as slaves, one significant impediment to the growth of Jehoshua worship was removed, leaving the Christians to deal solely with the Roman Empire and its suspicion of religious cults that followed "barbaric" practices.

Garrett Glass is the author of the Jehoshua series of historical fiction books, covering the development of early Christianity, beginning with the death of Jehoshua (Jesus Christ) and incorporating both historical and fictional characters and circumstances.

Garrett has published a third book, Who Cut God's Hair?, in October of 2013. This short book is not part of the Jehoshua series but is in response to reader's questions about Garrett's views on God and religion. Garrett establishes the basic principle, one that is certainly not original to him, that God is a creation of our imagination, but an illusion that has a force of reality for us similar to anything we can conjure up through our senses of sight or touch. From there, Garrett explores the qualities we imbue in God, whether he can exist in any form outside of our imagination, how the universe was created, what is the origin and purpose of religion, and the meaning of good and evil, heaven and hell, prayer, and related topics.

Learn more about Garrett Glass at his website here: http://jehoshuathebook.com/ 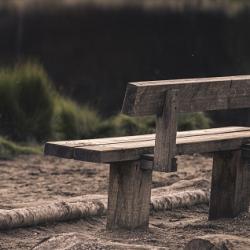 The Ease of Fake Sincerity in Christianity
Cassidy McGillicuddy
3

N.T. Wright's Galatians-- Part Fifteen
Ben Witherington
Get Patheos Newsletters
Get the latest from Patheos by signing up for our newsletters. Try our 3 most popular, or select from our huge collection of unique and thought-provoking newsletters.
From time to time you will also receive Special Offers from our partners that help us make this content free for you. You can opt out of these offers at any time.
see our full list of newsletters