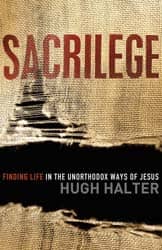 Breaking Images for the First and Last Time

On Christmas Eve I went to St. Patrick's Cathedral. . . . It had dawned on me before, but it really sank in: the Christmas story. The idea that God, if there is a force of Love and Logic in the universe, that it would seek to explain itself is amazing enough. That it would seek to explain itself and describe itself by becoming a child born in straw poverty . . . I just thought: "Wow!" Just the poetry. Unknowable love, unknowable power, describes itself as the most vulnerable. There it was. I was sitting there, and . . . tears came down my face, and I saw the genius of this, utter genius of picking a particular point in time and deciding to turn on this. Because that's exactly what we were talking about earlier: love needs to find form, intimacy needs to be whispered. To me, it makes sense. It's actually logical. It's pure logic. Essence has to manifest itself. It's inevitable. Love has to become an action or something concrete. It would have to happen. There must be an incarnation. Love must be made flesh.

I have to give you a warning before I share the following story. Some will yell "Sacrilege!" and close the book, too offended to read on. But I implore you to suspend judgment. This story took place in my own backyard. It was the starting place for this book. It motivated me to write about the difference between the real Jesus and the sanitized Jesus of religious tradition.

About eight years ago we were in our first year of starting a church. A gal next door was very close to our family and offered to help in any way she could. She wasn't a Christ follower, but she had a huge heart for people and for us personally as friends. She became very involved in our children's ministry, but her husband, "Big Billy," was not fond of me, God, or anything that resembled the traditional church world in which he grew up in inner-city St. Louis.

What I knew of Billy was that he beat up my neighbor in a fight, got shot through the eye by his friend while out hunting and walked out of the woods to live another day, and left St. Louis because of his mafia/gang connections. I wasn't sure whether that last one was fact or legend, but suffice it to say, Billy was one tough hombre.

One day while mowing my backyard, I looked up and saw Billy standing on his deck waving to me. As my eyes focused, I realized he was actually flipping me off. You know, giving me the bird. I didn't quite know what to do, so I just gave him one of those head nods, hoping to communicate, I see you, buddy, but I am ignoring your finger. I made one more pass with the mower and looked up again, hoping he'd be gone, but there he stood, like a statue, his finger saluting in my direction. Was he kidding? Was he serious? What did he think I would do?

I've been in many interesting situations, so this didn't seem as strange as you might suppose. But I do remember thinking, Now, hmm, what would Jesus do? (This was before the WWJD craze.) I have always been intrigued by how people find faith in God, and I try to be playful in situations like this. I could have been more textbook, I suppose, but in all my seminary studies I don't remember a chapter on how a Christian leader should handle the bird.

Nevertheless, I figured I'd best make a decision fast since one more pass by him without a response would communicate I was (a) afraid of him or (b) offended. Neither response was what I thought Jesus would do. A quick prayer and some deep theological analysis brought me to the conclusion that I needed to alter the playing field a bit—you know, do something this guy wouldn't expect from a pastor, or a "vicar," as he called me once. (I initially thought vicar was a derogatory swear word, but come to find out, it means "priest in training.")

So on my next pass, I parked the mower right next to the fence where Captain Hook was standing and let go of the handle, which shut down the motor, creating an awkward silence. As the robins peacefully chirped in the background, I reached back into the archives of my adolescence and lifted both hands high into the air, responding to tough Billy with the "double bird." That's right, the pastor one-upped him. Two birds for one stoner! I didn't just give him the double bird; I held my hands up and stared at him with a kind of Clint Eastwood glare. But even while glaring, I couldn't help picturing Big Billy jumping over the fence and beating me over the head with my own mower, St. Louis mafia style.