Praise for Rob Bell and a New American Christianity

"As evangelicalism of the twenty-first century continues its centuries-long quest for speaking the cultural idiom, Rob Bell's voice has emerged as one of the most significant—and controversial. James Wellman's prodigious research and astute analysis helps us understand why."
—Randall Balmer, Dartmouth College, author of The Making of Evangelicalism 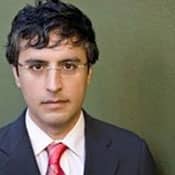 "Twenty years from now we may look back on Rob Bell as the man who forever changed the face of American evangelical Christianity. Thank God, then, for James Wellman's profile of this complex, controversial, and utterly compelling religious leader. This is a book that should be read by all Americans regardless of their religious affiliation."
—Reza Aslan, author of No god but God and Beyond Fundamentalism

"Rob Bell is a phenomenon. The emotional outpouring evidenced in both his critics and supporters demonstrate that his work has isolated and exposed a crisis that exists within the Evangelical community. A crisis that, once brought to the surface, has the potential of short circuiting fundamentalist strains within the movement and clearing the path for a theological reformation. This book is among the first to provide an insight into the development of Bell's thought and chart the significance of his intervention in the rocky landscape of Christian culture."
—Peter Rollins, author of How (Not) to Speak of God and Insurrection: To Believe Is Human To Doubt is Divine

"Much more than a biography, Wellman uses the life of Rob Bell to reveal the inner logic of a growing orthodoxy in American Christianity. Wellman traces the maturing of this charismatic preacher from an earnest young pastor to a nuanced bestselling "heretic"-and in doing so maps the development of a more ambiguous, more open evangelicalism. This remarkably readable study of Bell's ministry illuminates the controversies, connects the histories, and explains the theologies. As the most public figure manifesting the transformation of American evangelicalism, Bell's less dogmatic, more relational faith may hold the key to its sustainable future. Even those familiar with his ministry will find new insights and come away with a deeper sense of Rob Bell's intimate connection to the developing history of modern Christianity."
—Gerardo Marti, L. Richardson King Associate Professor of Sociology at Davidson College; author of A Mosaic of Believers and Hollywood Faith