Now Featured in the Patheos Book Club
Making Friends Among the Taliban
A Peacemaker's Journey in Afghanistan
By Jonathan P. Larson

Two years ago, the world was shocked when 10 aid workers were murdered as they returned home from an eye care clinic in northern Afghanistan—a tragic event for which no one has claimed responsibility. Author, pastor, and close friend Jonathan Larson documents the far-reaching legacy of one of the ten, Dan Terry, in Making Friends among the Taliban.

Often viewed as reckless or extreme even among the organizations he represented, readers will come to learn and appreciate the unconventional ways that Terry, a zesty, truly inspiring character, interacted with and cared for the Afghan people for almost 40 years.

Larson notes, "To the astonishment of his American audience, Dan would frequently assert that he counted Taliban commanders among his friends."

In this telling account, readers will behold Terry's deep devotion and love for Afghanistan, its people, and even the very ones who took his life. He was known for saying, "In the end, we're all knotted into the same carpet"—a conviction that marked the way he lived as well.

Larson writes, "[Terry] seemed intent not so much on healing or even redemption, but on reconciliation . . . it was the humanity of each person that he kept reaching for, flint-like in his belief that there was something noble in each neighbor."

Terry was a mentor to many. "He was the most amazing person; the humblest, kindest soul I have ever known," one colleague remembers. "I'd go anywhere with him. No one knew Afghanistan better than Dan. And Afghanistan knew Dan."

Terry's passion and altruism toward the Afghan people has left a legacy that should not, and will not, be easily forgotten, neither here nor in Central Asia, nor even among the very ones who took his life.

In addition to the book, a documentary that explores Dan Terry's life, work, and tragic death, titled Weaving Life, is scheduled to air on ABC-TV in October. The documentary has been produced by Eastern Mennonite University in partnership with MennoMedia. Eastern Mennonite University film students, intrigued by Dan's commitment and humility, embarked on their own journey to understand the story. Through interviews, Dan's photography, and their own artwork and video journals, the students discover the startling power of sustained commitment and what Dan called "fierce" love. Dan's story is told by longtime friends Jonathan Larson and Daniel Taylor; his daughter, Anneli Terry; and his wife, Seija Terry. The film also features Dr. Lisa Schirch, a longtime peacebuilder in Afghanistan. 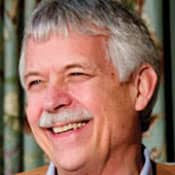 Though born in Minnesota, Jonathan Larson's early home was the Brahmaputra River Valley of northeast India.

The oldest of eight children, he studied at Woodstock School in the Himalayan foothills where he was classmate and trekking partner of Daniel Terry. Having completed studies in history at the University of Minnesota in 1970, he and his childhood sweetheart, Mary Kay Burkhalter, volunteered to teach school in the Congo.

Following graduate studies, in 1981, the family returned to Africa under the auspices of the Mennonites to Botswana. Known for his grasp of Tswana language and lore, he served as a leadership trainer in African communities and churches.

Since 1994 Jonathan has been based in Atlanta as he writes, mentors, and travels to visit conferences, campuses, and churches.