Reborn on the Fourth of July: About the Book & Author

For decades now, the United States has proudly claimed the mantle of "the world's only superpower" based on military might and the scope of military interventions throughout the world. As a result, whole generations are growing up with the understanding that war is the norm, that perpetual conflict is a way of life. But is it the way of Christ?

Logan Mehl-Laituri grew up in a community that celebrated military service. His faith reinforced his love of country and his sense that that love was best expressed by fighting its battles. Then he went to war, and then he was born again.

In Reborn on the Fourth of July you'll learn through Logan's story the real cost of war to military personnel, the real challenges to Christians that are raised by military service on and even off the battlefield, and the real questions that each of us must wrestle with as we hold in tension our love of country with God's love for the world. 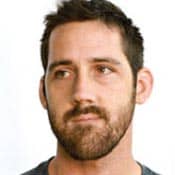 Logan Mehl-Laituri is an army veteran who speaks and writes broadly about veterans issues and Christian perspectives on militarism and nationalism (visit his website The Centurion's Guild to learn more).  He served in the Iraq War as a forward observer/fire support specialist before applying to change his status to conscientious objector. After his discharge he went to Palestine with Christian Peacemaker Teams, and returned to Iraq with Shane Claiborne for the documentary film The Gospel of Rutba: Christians, Muslims, and the Good Samaritan Story in Iraq.