Healing the Wounds of Racism: On the Sin of Silence and Our Call as Christians

Editor's Note: Dr. Labberton first wrote the following as an address to his Fuller Theological Seminary community. The relevancy of his remarks merits a wider audience.

It has been about six weeks since the town of Ferguson, MO, made national headlines for the controversial shooting of an unarmed African-American teenager by a white police officer. The dust has not settled in Ferguson—the BBC reports new rioting just last night—but the incident and its implications have already begun to disappear from the headlines of American newspapers. I am afraid that what has happened here will be too quickly forgotten.

I am compelled to write about events that have unfolded this summer in Ferguson. We all must await the facts and conclusions of this particular case, but meanwhile, silence is one of the sins of omission that has allowed us to be in denial about racism in our country, far more widespread than just one small Missouri town. I may be writing from my office across the country from there, but Ferguson is Pasadena as much as it is any other place where the Fuller community lives in the context of unreconciled racial tension.

Ferguson, Missouri exposes the open wound of racism in America. It's not new, and it's not healing. Daily, throughout this country, the nerve-endings of racial tension, pain, fear, and hatred are triggered. In the case of Michael Brown's death, the drama becomes public and protracted. We are a long way from knowing how this changeable and conflicted story in Ferguson will unfold and what measure of justice will or will not be served. Our hearts are broken. We are angry and confused.

I have been cataloguing in my mind my African-American brothers who have been victims of police violence. Even one instance would be too many, and yet my personal knowledge is double digits. None has lost his life, but each life has been permanently changed. Modest accountability for the police officers involved sometimes occurred. Silence and inaction were the most common outcomes. A sense of belief in the possibility of fairness, justice, equality, or communion was sacrificed.

The wound exposed by Ferguson is not, however, exclusively or even primarily about police brutality, nor is it simply the shooting death of an unarmed African-American teenager. These are urgent and important offenses, but the far more pervasive wound that this story lays bare is from a minefield of racism, with shrapnel buried and unhealed from the past.

Every race has its victims and perpetrators: the impact is felt in countless instantaneous exchanges, glances of disregard, attitudes of disdain, verbal cuts of hatred. The shrapnel embeds itself deep inside a person, and when it isn't removed, the resulting toxicity gradually infects a whole life. Multi-generational wounds fester, and a tragedy like that in Ferguson draws them to the surface. The excruciating suffering that exists under the surface is not new, it is simply exposed again to a culture in denial.

These individual re-openings of the wounds of racism occur amid patterns, systems, and institutions that reify hatred and separation. Bureaucratic decisions often ignore racial realities, leaving people permanently and hopelessly excluded from the societies of which they are so vital a part. Individuals working inside such systems may be advocates of racial equality, of course, and often their motivations may be to "make a difference." But when the keepers of the public justice system appear to violate justice itself, anger erupts, despair intensifies, and buried shrapnel re-lacerates the old and the young alike.

What can we do? What should we do?

Listen. This moment calls God's people to action, but action should start by listening. Choose to be with people who do not share your own ethnic background, and listen to the stories and the pain. Resist defensiveness or denial, rescue, or tidying it all up. Keep listening—especially to stories of those whose race or ethnicity is not your own. Love starts here.

Pray. Find someone in the body of Christ to pray with about what you are hearing. Bringing God's passionate concern for love and justice into these matters is critically important and reminds us that the just, forgiving, loving power of God can make a difference. Call upon the God who seeks justice and calls us to as well.

Attend. Look for ways to engage the conversation further, to share in the hearing of stories different than your own. We will be hosting on our Pasadena campus, and possibly elsewhere, conversations about issues of race and the questions and challenges that face our lives as part of Christ's body.

Read. Much has been written on subjects related to race that is worth reading. To start, I have found valuable Divided by Faith: Evangelical Religion and the Problem of Race in America by Christian Smith and Michael O. Emerson (OUP, 2000); The New Jim Crow: Mass Incarceration in the Age of Colorblindness by Michelle Alexander (The New Press, 2013); Race: A Theological Account by J. Kameron Carter (OUP, 2008).

When considering whether all religions are in some way one, the smart money...
James Ford
3 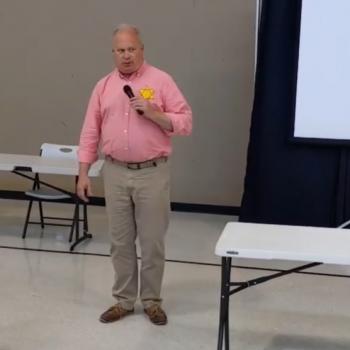 Social Injustice, Systematic Racism, Critical Race Theory And Original Sin
Henry Karlson
Get Patheos Newsletters
Get the latest from Patheos by signing up for our newsletters. Try our 3 most popular, or select from our huge collection of unique and thought-provoking newsletters.
From time to time you will also receive Special Offers from our partners that help us make this content free for you. You can opt out of these offers at any time.
see our full list of newsletters
Editor's picks See all columnists