On the hot afternoon of July 2, 1863, the Union Army's Irish Brigade, a unit composed predominantly of Catholic immigrants, waited for the order to go into action. It was the second day of the Battle of Gettysburg, a three-day conflagration that saw over 50,000 casualties between both sides. The previous day, Robert E. Lee's Confederates had driven the Union troops through the town of Gettysburg onto a hill called Cemetery Ridge. Now, Lee strove to dislodge them from their stronghold and destroy the Union Army.

Just before the Irish Brigade went into the fight, its chaplain, Father William Corby, climbed up onto a boulder to give the men general absolution from their sins. Since there was no time for individual confession, he talked briefly about patriotism, bravery, and penance before pronouncing the formula. About 320 of the brigade's 530 men fell in the wheat field that day, but the tide was turning in favor of the Union.

There are numerous statues on the Gettysburg battlefield, but only one is dedicated to a chaplain. In 1910, alumni of the University of Notre Dame, where Corby had been president, erected a statue of him giving absolution. The event has also been commemorated in paintings, poems, books, and film. "It's a symbolic depiction of the bond between Catholic faith and American patriotism at the nation's supreme moment of crisis," wrote Civil War historian Lawrence Kohl.  Corby symbolized Catholic commitment to the Union.

William Corby was born on October 2, 1833 to a prominent real estate dealer in Detroit. At the age of 16, he left school to work for his father. Four years later, he started college in South Bend, Indiana. In 1843, a group of French priests belonging to the Congregation of the Holy Cross had started a small Catholic college that grew into America's flagship Catholic university—the University of Notre Dame. 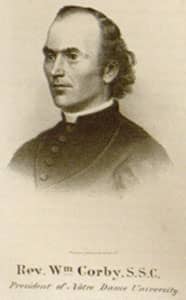 Kohl notes that it was "little more than a tiny French boarding school for boys of all ages," when Corby arrived. During his time at Notre Dame, Corby began to think more seriously about the priesthood. In 1857, he joined the Holy Cross Fathers and taught at the school while pursuing theological studies. Three years later, on the eve of the Civil War, he was ordained a priest.

While many Protestant churches split over the issues of secession and slavery, the Catholic Church took no official stand on the war. Bishops in both North and South supported their troops. Catholic young men followed suit, joining both the Union and Confederacy. Several dozen priests served as chaplains in both armies, and over six hundred religious women ministered to the sick and dying in hospitals. Their work did much to reduce the anti-Catholicism that had flourished in the pre-war era.

In the fall of 1861, Father Corby gave up his teaching duties at Notre Dame to become chaplain of the 88th New York Infantry, a unit in the Irish Brigade. Founded by General Thomas Francis Meagher, a prominent figure in Irish New York circles, the brigade was composed mainly of Irish Catholic volunteers. The brigade fought in nearly every major battle in the Civil War's Eastern Theater. At the start, it had over three thousand men. By the time it was disbanded in 1864, there were barely a few hundred.

The chaplain's duties were not clearly defined. One veteran priest told a new chaplain, "Do what you can; learn as you proceed." In certain respects the entire Army of the Potomac, the main body of Union troops in the East, was his parish. He traveled through the army, celebrating Mass, hearing confessions, and providing spiritual comfort to Catholic and non-Catholic soldiers.

He was also present on the firing line through most of the Army of the Potomac's major battles, ministering to the wounded and the dying. The priest, as Corby saw it, was a "go-between, exercising, as best he could, the offices of Christian charity in numerous ways." It was hard work, but in his memoirs he wrote,

I recall a poor soldier who was accidentally shot through the left lung. I happened to be nearby, had just time to hear his confession, and he breathed his last. All the aforesaid labors, trials, and fastings were well rewarded by the chance given to save that one soul.

He believed the sacraments gave soldiers "new courage." "In our darkest hours and during our longest marches, the Holy Sacrifice made us feel that we had God with us to guide us and assist us to live well," he wrote. "And, if need were, to die well."

After seeing service in some of the war's hardest battles during three years with the Irish Brigade, Father Corby returned to Notre Dame in the fall of 1864. He served twice as president of the university, taught there, and stayed there for most of his remaining years. But the war had been a defining moment in his life.