Idols exist, we begin to see, as a pretext for setting ourselves at the centre of reality and worshiping the work of our own hands. Once man has lost the fundamental orientation which unifies his existence, he breaks down into the multiplicity of his desires; in refusing to await the time of promise, his life-story disintegrates into a myriad of unconnected instants. Idolatry, then, is always polytheism, an aimless passing from one lord to another. Idolatry does not offer a journey but rather a plethora of paths leading nowhere and forming a vast labyrinth. (LF 13)

Being on this side of history, we know that God is always faithful to his promises, and eventually, Israel gained the Promise Land.

Believing means entrusting oneself to a merciful love which always accepts and pardons, which sustains and directs our lives, and which shows its power by its ability to make straight the crooked lines of our history. Faith consists in the willingness to let ourselves be constantly transformed and renewed by God's call. Herein lies the paradox: by constantly turning towards the Lord, we discover a sure path which liberates us from the dissolution imposed upon us by idols. (LF 13)

In these Old Testament accounts of Abraham and Israel we glimpse what St. Augustine once observed regarding the two-way street of faithfulness.

The Fullness of Christian Faith

The first chapter of Lumen Fidei then brings us to Jesus Christ, the ultimate sign and guarantee of God's faithfulness.

All the threads of the Old Testament converge on Christ; he becomes the definitive "Yes" to all the promises, the ultimate basis of our "Amen" to God (cf. 2 Cor. 1:20). The history of Jesus is the complete manifestation of God's reliability.

In the love of God revealed in Jesus, faith perceives the foundation on which all reality and its final destiny rest. (LF, 15)

Again the reality question is preached with verve defending those derided for their faith within modern culture! Lumen Fidei firmly declares that the light of faith is not irrational or fragile, but set on the surest and most powerful foundation: God.

Our culture has lost its sense of God's tangible presence and activity in our world. We think that God is to be found in the beyond, on another level of reality, far removed from our everyday relationships. But if this were the case, if God could not act in the world, his love would not be truly powerful, truly real, and thus not even true, a love capable of delivering the bliss that it promises. It would make no difference at all whether we believed in him or not. Christians, on the contrary, profess their faith in God's tangible and powerful love which really does act in history and determines its final destiny: a love that can be encountered, a love fully revealed in Christ's passion, death and resurrection. (LF 17)

Here the earlier theme delves deeper: It is not only this personal knowing of this God-become-Man in salvation history that grounds Christians, but the believing in him that also empowers them. They participate in the way God sees reality when they are united to Jesus Christ.

Faith does not merely gaze at Jesus, but sees things as Jesus himself sees them, with his own eyes: it is a participation in his way of seeing. In many areas in our lives we trust others who know more than we do. We trust the architect who builds our home, the pharmacist who gives us medicine for healing, the lawyer who defends us in court. We also need someone trustworthy and knowledgeable where God is concerned. Jesus, the Son of God, is the one who makes God known to us (cf. Jn. 1:18).

Far from divorcing us from reality, our faith in the Son of God made man in Jesus of Nazareth enables us to grasp reality's deepest meaning and to see how much God loves this world and is constantly guiding it towards himself. This leads us, as Christians, to live our lives in this world with ever greater commitment and intensity. (LF 18)

The gift of salvation by faith brings with it a most marvelous byproduct, that of seeing and knowing reality better—seeing as Jesus sees—knowing and believing in the power and presence of a triune God.

Seeing as Jesus sees is the faith to see God as our Father.

The phrase "Abba, Father," so characteristic of Jesus' own experience, now becomes the core of the Christian experience (cf. Rom. 8:15). The life of faith, as a filial existence, is the acknowledgment of a primordial and radical gift which upholds our lives. We see this clearly in Saint Paul's question to the Corinthians: "What have you that you did not receive?" (1 Cor. 4:7). (LF, 19)

All Our Yesterdays
Jim Meisner Jr.
2 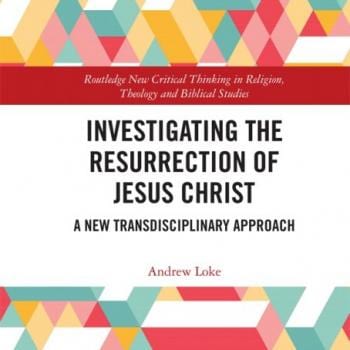 Andrew Loke's New FREE BOOK on the Resurrection of Jesus
Mike Bird
Get Patheos Newsletters
Get the latest from Patheos by signing up for our newsletters. Try our 3 most popular, or select from our huge collection of unique and thought-provoking newsletters.
From time to time you will also receive Special Offers from our partners that help us make this content free for you. You can opt out of these offers at any time.
see our full list of newsletters
Editor's picks See all columnists