To Unknown Recipients of my Heartfelt Gratitude

I believe that it was the 20th-century theologian Hans Urs von Balthasar who described holiness as a quality by which one would disappear into the mission of the Church. This insight strikes me as right. Saints do not set about their mission with a publicity strategy in mind. Some saints do become famous, even in the face of their best efforts to resist, but no saint is looking for celebrity status. By the time their image is unfurled on the loggia of St. Peter's Basilica, the saint has long since moved on and receives no personal benefit from all the accolades. Their heart was always set on greater things anyway. If during their life on earth someone might have complimented them on their apparent holiness they would likely have dismissed such claims. Saints are the ones who have little appreciation for how much they manifest Christ. I think that they are so enamored of how the Lord reveals his divine life in others, that they have little time for seeing him in their own image.

Saints will accept our gratitude and even our praise, but they will never keep these for themselves. They give all that to Christ. It is one of the ways that they decrease as the Lord increases.

If disappearing into the mission of the Church is the great sign of a saint, it is then likely that most of the saints have passed through this world to the next unnoticed. Their anonymity is testimony to their sanctity. Though unknown in this world, they shine brighter than the stars in the world that is to come. And like the nameless stars in this world, that have for ages provided a sense of direction, or even a glimmer of hope, their light abides and guides us still.

This is supposed to be a brief essay expressing gratitude for someone; it is meant as an act of thanksgiving for someone whose positive impact has seemingly gone without notice. That category would include all of us at some point. There are so many! I feel that such a task is akin to those acceptance speeches that one hears on the night of the Oscars. The music (in this case, my word count) is already signaling that my time is up.

As my mind worked to hone my list and my conscience was provoked by my failure to acknowledge the significance of so many, that insight from von Balthasar repeatedly delivered its illumination. I am grateful for all those who, being so caught up in love for Christ, have set aside any other goal than to accomplish that mission through which they would disappear into the Church. You were so successful in your mission that I never even knew that you and what you did was so great and important, but it truly made all the difference. I will know you in heaven, but until then, please accept my profound appreciation.

Joe Biden is my president: Responding biblically to leaders with whom we...
Jim Denison
2 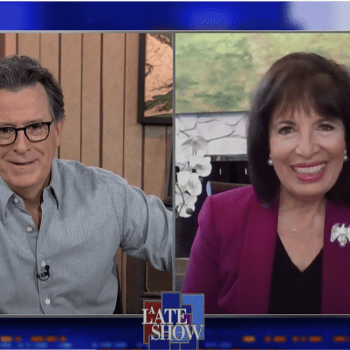 Now are you alarmed by the intrusions of religion into our secular government?
Annie Laurie Gaylor
3

Think US evangelicals are dying out? Well, define evangelicalism...
The Conversation
Get Patheos Newsletters
Get the latest from Patheos by signing up for our newsletters. Try our 3 most popular, or select from our huge collection of unique and thought-provoking newsletters.
From time to time you will also receive Special Offers from our partners that help us make this content free for you. You can opt out of these offers at any time.
see our full list of newsletters
Editor's picks See all columnists