Who Proceeds from the Father and the Son

The Nicene Creed is essentially a statement of faith in a God who reveals himself as a trinity (Latin trinitas, "threeness"). That statement was articulated during a period in Christian history that sought to make clear the relationships among the Father, the Son, and the Holy Spirit. The raw data, as it were, from the texts include testimony to a Father who creates; a Son who has manifested God's own self in human flesh; and a Holy Spirit who remains in our hearts. The debates that clarified the relationship are too complex to capture here, but they have been studied exhaustively in works such as Aloys Grillmeier's multivolume Christ in Christian Tradition.

From an historical perspective, the description of the Holy Spirit proceeding "from the Father and the Son" (in Latin, filioque) is controversial. It reflects a Western theology influenced primarily by Saint Augustine, and does not appear in the original 4th-century creed. It is absent from contemporary Eastern versions of the creed (example).

With all due respect to our Eastern brothers and sisters, though, I shall focus in this brief reflection on what this theology might suggest for us today.

In his recent apostolic exhortation Evangelii Gaudium (The Joy of the Gospel), Pope Francis describes the role of the Holy Spirit:

The Holy Spirit, sent by the Father and the Son, transforms our hearts and enables us to enter into the perfect communion of the blessed Trinity, where all things find their unity. He builds up the communion and harmony of the people of God. The same Spirit is that harmony, just as he is the bond of love between the Father and the Son.It is he who brings forth a rich variety of gifts, while at the same time creating a unity which is never uniformity but a multifaceted and inviting harmony. (117)

Francis here cites Thomas Aquinas, who in his Summa Theologica writes that "without the Holy Spirit who is the bond of both, one cannot understand the connecting unity between the Father and the Son." Aquinas, in turn, relies heavily on Augustine (especially his On the Trinity), whose great insight about understanding God as love is that there must then be a lover, a beloved, and the love between them: a trinitas.

To affirm that the Holy Spirit proceeds from the Father and the Son is thus to affirm that God is love. Perhaps more remarkably, it is to affirm that this God who is love invites us into participation in the divine life of love. The icon above, by Andrei Rublev, points to this dynamic: the table is open to the viewer, inviting him or her to sit at table with the three. Responding to this invitation is to participate in the communion of love, made possible by the Holy Spirit whom Christ sent to remain with us. "Remain in my love," Jesus commands (see Jn. 15:10), telling his disciples that an Advocate (parakletos or "paraclete") will come to testify to Jesus.

We too must testify, by virtue of the way that we love. The law and the prophets—and indeed, the life of Jesus himself—can be summed up in love. 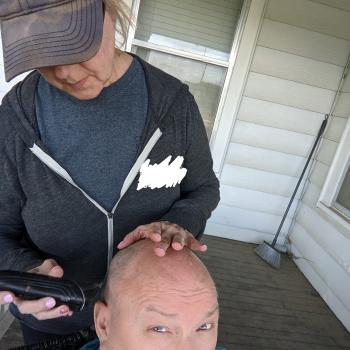 Being with my Wife
Karl Forehand
2

The True Light, Do Not Expect So Little
John Mark N. Reynolds
Get Patheos Newsletters
Get the latest from Patheos by signing up for our newsletters. Try our 3 most popular, or select from our huge collection of unique and thought-provoking newsletters.
From time to time you will also receive Special Offers from our partners that help us make this content free for you. You can opt out of these offers at any time.
see our full list of newsletters
Editor's picks See all columnists