We're seeing something tonight that we don't often get to see here in California's Bay Area: lightning. The TV news people have been warning us about this for two days now. Dry lightning, they call it. No rain.

It is an interesting sky. There are big swathes of clear space with stars. Then there are clouds that looked like something out of a Hudson River School painting earlier in the evening, before the sun went down. The moon came up just after sunset, full and bright, lighting those clouds in a different way now that it's dark.

I have a little job to do, ferrying a family member by car out into the Central Valley, where the atmospheric heat engines really roar this time of year. My passenger graciously washed my windshield before we left. It's perfectly clear.

Did you see the flash?

It was behind a cloud up ahead, lighting the cloud behind it in red. Couldn't actually see the bolts, but there were at least three of them in succession.

I have always loved that term: lightning bolt. It is perfect. I suppose one could concoct some comic-book concatenation of K sounds that might try to compete onomatopoetically against lightning bolt's sheer expressiveness, but I doubt one can improve upon real English in this case. One must be careful of the spelling, though. Too often, I see people write lightening. Please! No. This is not a bottle of peroxide from the drugstore's hair aisle. This is Thor at work. Let's get it right. Lightning.

It started with some lacy business high up to the south of us, followed by a larger bolt to the ground many miles away. I swear I can see every detail of the landscape between here and there.

California is a big place. Right now, there are about two hundred miles of sky around me. The flashes happen every little bit, some even showing in my rear view mirror. All are too far away to hear the thunder over the road noise. Just as the TV people said, there is no rain.

I drop off my passenger. His girlfriend comes to meet him at the road, previously unaware of what was going on outside tonight. The air is at that perfect place between warm and cool that Central Valley evenings are famous for, so soft on the skin. I hope they stay out for a while and enjoy the sights. I have to get home, so I start the return trip. The show goes on.

According to the myth, this happens when Thor is out in his thunder wagon. The sound comes from the wheels as they tear across the tops of the clouds. Depending whom you talk to, the lightning bolts are either sparks from the hooves of the goats that pull the wagon, or from the rims of the wheels, or from his hammer held aloft as he goes flying through the sky. Which do I think it is? That will probably depend on which story I am telling, next time I am telling it. Ask me then.

There is an obligatory paragraph I am supposed to put in here, explaining that myths were how primitive people explained that which they couldn't explain about the world around them, because the poor fools didn't have the chance to take Physics classes in college. I have always thought the obligatory paragraph was, is, and forever will be weak, unappealing, and a failure at explaining any thing about any people, primitive or otherwise. I took Physics in college, and understood it well enough. Maxwell's Equations about electricity and magnetism really are awesome, four high peaks of human mentation. And they are no substitute for Thor, or Thor for them.

Driving west now, there is a large bank of cloud over the East Bay hills.

This bolt was curved, moving upward. Its path seemed almost like a profile.

One day back in the late '80s, I was going out to lunch with my co-workers on a warm overcast day. We had just emerged from the building where we worked, and there was a flash like that, followed closely by a rumble. Without thinking about it, I shouted "Yeah Boss! Do it again!" My co-workers looked at each other quizzically. I was a little embarrassed. Where did that come from? I asked myself who I was talking to, but I knew the answer even before the question was complete in my mind. I was not yet consciously Heathen. Unconsciously, I clearly was.

Several years later, I was on the edge of being Heathen right out in public. Talking with a woman I barely knew in a cafeteria line at a conference, she meandered us onto the topic of religion. I said I had always been fond of the gods of the Norse myths. She waved her hand dismissively, insisting that of course one couldn't have a personal relationship with gods like that. I surprised myself by insisting that of course one could.

I am home now. The Son of Earth and I have had a wonderful evening together, out for a joyride. Life is great. 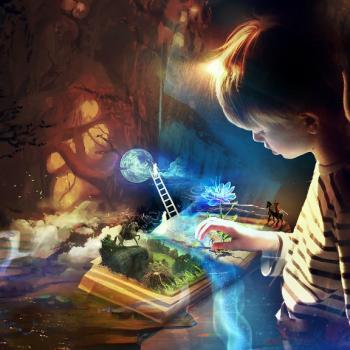 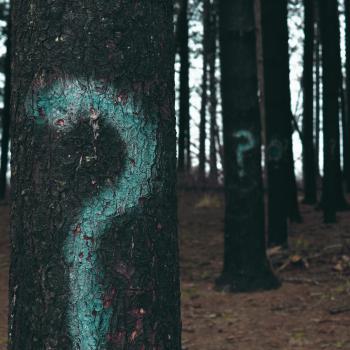 Yes, God is hidden. What if that's a good thing?
Guest Contributor
3

Consumerist Christianity
C. Don Jones
Get Patheos Newsletters
Get the latest from Patheos by signing up for our newsletters. Try our 3 most popular, or select from our huge collection of unique and thought-provoking newsletters.
From time to time you will also receive Special Offers from our partners that help us make this content free for you. You can opt out of these offers at any time.
see our full list of newsletters
Editor's picks See all columnists