The young man was still stammering apologies. She looked at him, and he stopped. She touched his face briefly, and the confusion left his eyes for a moment.

It didn't take long for the two of them to get everything back onto the tray. He picked it up, and straightened up, smiling, knowing that what he was doing needed doing. As he walked away, she had a feeling that a young woman nearby had seen this. This young woman, wherever she was, was there with her family, was always with her family. Perhaps the young woman would come back another time, notice the young man again, and smile her quiet smile for him. Yes, she thought she would. In fact, she was certain of it now.

Returning to the shopping chore, she noticed a furniture store. Did her brother and his wife have comfortable chairs to sit on? Perhaps this was what she needed to get for him. There were many choices. Some of the chairs were elegant to look at, but uncomfortable to sit on. Some unfolded in interesting ways, in case one didn't want to get up before falling asleep in them. Once again, there was nothing here that seemed right.

Not far from the chairs, however, was something else that interested her. It was a full-length mirror on a stand, able to turn and tilt in many directions.

She thought about the mirrors she had at home. Several favored hand mirrors came to mind. And there was the larger one over her dressing table. But there were no mirrors in all of her hall like this, where she could see all of herself all at once. Standing in front of it, she turned this way and that. How had this obvious omission gone on so long, unnoticed? Here was something she truly needed to have.

The saleslady here was cold to her. Some women were like that. And the saleslady told her that, no, of course she couldn't take this particular mirror with her. She would have to go down to a place called Loading Dock and pick up one just like it, but in a box. Once she had it home, then she would have to assemble it. The saleslady asked if she thought she could do that.

The men at Loading Dock, and even the woman working there, were not cold to her. They brought out the box, asked where her truck was, asked if they could assemble the mirror for her, offered to do anything at all for her. It was sweet, if typical. She asked them to move the box out of the way, around the corner outside the dock, so it wouldn't trouble them while she waited for her truck. Then she had to work at getting them all to go away. Of course, there was no truck. Once they had left, she sized up the box, remembering what must be inside it. She put it into her purse.

The day had not been a total loss, but she still had no present for her brother. And it was getting late. Time to go home. So she went out to the front of Shopping Mall and sat on a bench to wait for her ride.

The sky was a mixture: sunshine on one side, with a few clouds drifting in from the other side. The clouds appeared to have a little bit of rain in them. She compared the angles and the light. Sun here, sprinkles there. She knew her ride would be along any minute now.

As she waited, she looked down at the concrete walkway.

There was a crack in it, not by design. She could see there was a stain over the crack, where someone had sprayed something awful to keep things from sprouting there. Still, at one end, and close to her, a bit of green grass grew. It was that singular brilliant green of new grass, bursting forth into the world. Life would not be stopped. It would not even be contained.

She couldn't just pull the grass up and give it to him. That would spoil it. She needed to give him the whole expanse of concrete with its little green tuft for this gift to be seen for what it was.

But alas, she couldn't figure out how to put it into her purse. 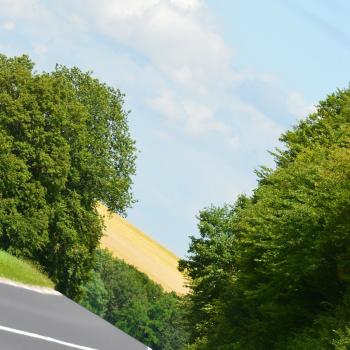 Sainthood: What Does The Road Look Like?
William Hemsworth
2 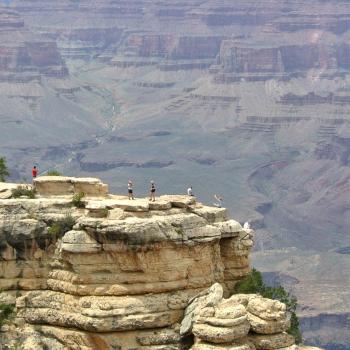 Looking for Evidence of Creation on Mars
Scott R. Stahlecker
3 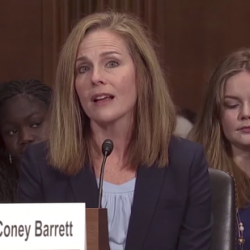 Amy Coney Barrett: Abortion is "Barbaric" and IVF Should Be Criminalized
Hemant Mehta
Get Patheos Newsletters
Get the latest from Patheos by signing up for our newsletters. Try our 3 most popular, or select from our huge collection of unique and thought-provoking newsletters.
From time to time you will also receive Special Offers from our partners that help us make this content free for you. You can opt out of these offers at any time.
see our full list of newsletters
Editor's picks See all columnists