How Moses Blew It (and Made It)

In this instance, God relieved the overwhelmed leader, Moses, not by taking away the people, nor by taking away his responsibility. The remedy did not come by sending him away on a sabbatical, nor by disassociating him from them, nor even by taking his life, as he actually requested. Instead, God relieved Moses by giving him something else—a new Spirit-anointed team, some seventy strong. It reminds me of the power and potential John Wesley recognized in a God-honoring team. He said:

Give me one hundred men who fear nothing but sin and desire nothing but God, and I care not whether they be clergyman or laymen, they alone will shake the gates of Hell and set up the kingdom of Heaven upon the earth.

After voicing some doubts to God and receiving a word of correction (cf. Num. 11:18-23), Moses implemented the new plan and selected a new team.

So Moses went out and reported the Lord's words to the people. Then he gathered the seventy leaders and stationed them around the Tabernacle. And the Lord came down in the cloud and spoke to Moses. He took some of the Spirit that was upon Moses and put it upon the seventy leaders. They prophesied as the Spirit rested upon them, but that was the only time this happened (Num. 11:24-25, NLT).

Not only was a team raised up to assist Moses, for at least a time they were acting very much like him, apparently emulating his example and God-given functions—full of the Spirit, preaching, prophesying, and being used of God. Joshua, the personal assistant to Moses, was alarmed by this behavior since he was accustomed to a more hierarchical leadership structure and saw these functions as the sole responsibility and privilege of Moses, the man of God. Used to being led by one man in a hierarchical environment, the empowered team of leaders was something apparently entirely new to Joshua. He was clearly uncomfortable with the change. He said to his leader, "Eldad and Medad are prophesying in the camp! . . . Moses, my master, make them stop!" (Num. 11:28, NLT).

Moses, however, responded quite differently to the implementation of a new team than did his assistant Joshua. He had a different view of the event. Apparently Moses had already had his fill of solo leadership efforts and the burdens associated with it. He was exhausted and actually welcomed the emergence of a new team. This marked a significant moment in Israel's history and not only foreshadowed the Day of Pentecost, it represents the first account in scripture of a Spirit-anointed team. You can hear in the "wish" or desire of Moses a change in the heart of this leader; one that had come to realize the value of not lording it over others or simply using hierarchical tactics as a leader, but as one who has come to value the power of a great team. Moses was learning how to draw circles.

But Moses replied [to Joshua], "Are you jealous for my sake? I wish that all the Lord's people were prophets, and that the Lord would put his Spirit upon them all!" Then Moses returned to the camp with the leaders of Israel." (Num. 11:29-30, NLT).

A little older and a little wiser, Moses saw something he had earlier missed. He had come to see so clearly that many hands made the task lighter and the effectiveness so much greater. Teams don't add to your effectiveness as a leader; they multiply it.

This column is adapted from Robert Crosby's new book, The Teaming Church: Ministry in the Age of Collaboration (Abingdon Press).

Change The World With Kindness, One Person At A Time
Shaunti Feldhahn
3 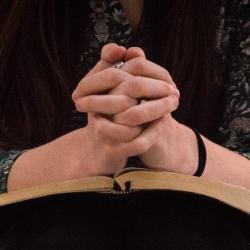 The Three Stages of Christians' COVID Prayers
Cassidy McGillicuddy
Get Patheos Newsletters
Get the latest from Patheos by signing up for our newsletters. Try our 3 most popular, or select from our huge collection of unique and thought-provoking newsletters.
From time to time you will also receive Special Offers from our partners that help us make this content free for you. You can opt out of these offers at any time.
see our full list of newsletters
Editor's picks See all columnists