The Gift of the Holy Ghost

According to Mormon belief, when a person has come to trust in Christ, and has turned from the world of sin through repentance and baptism, she should receive the Holy Ghost. That is done through a rite ("an ordinance" in Mormon terms) in which those who hold the priesthood lay their hands on the person's head and command her in the name of Jesus Christ and by the authority of the priesthood to receive the Holy Ghost. After that command, they usually also offer a blessing.

Every member of the LDS Church has been through this ordinance. It is part of the process of becoming a member. But my guess is that we seldom think much about what it means. We speak of being given "the gift of the Holy Ghost," but that gift isn't the Holy Spirit itself. Instead it is an authoritative commandment.

Someone will occasionally remark on that somewhat odd fact, namely that the gift is a commandment, though gifts and commandments don't usually inhabit the same space of meaning. But in spite of that occasional notice, we seldom reflect on what that command might mean to us.

Adam and Eve left the Garden of Eden, forced to leave God's presence and live in the world we find ourselves in, a world of sweat and work: "Adam began to till the earth . . . and to eat his bread by the sweat of his brow . . . And Eve, also, his wife, did labor with him" (Moses 5:1).

LDS scripture tells us that in this world of work and sweat Adam and Eve were keenly aware of the absence of God. They could still hear his voice, but they were shut out from his presence (Moses 5:4).

The oldest meaning of the word receive is "welcome," a meaning that fits well here: to receive the Holy Ghost is to welcome him into one's life. Another old meaning of the word is "accept something as authority," which also fits well with the central element of this ordinance: those given the gift of the Holy Ghost are commanded to welcome him into their lives as an authority. He is the one whom they should obey because he is God.

But that welcome of God's authority can be fearsome. Philippians 2:6-7 tells us that Jesus emptied himself of himself, he made himself nothing. Jesus emptied himself of his own will and took on himself the will of the Father. That is a model for what it would mean to live by the Spirit, but Jesus tells us that the Spirit is like the wind which "bloweth where it listeth, and thou hearest the sound thereof, but canst not tell whence it cometh, and whither it goeth" (Jn. 3:8). It is fearsome to cast our will away for it to be replaced by that which we cannot predict or control. The commandment to welcome the Holy Ghost is a test of our faith, of our trust in God.

As fearsome as loss of control is, it may not be the most fearsome thing about the self-emptying required by the welcome of the Holy Ghost. Our greatest fear is that if we empty ourselves of our will, then effectively we will cease to exist. Giving up our will is frightening because we think it means our extinction. As a person, I believe that "I am my will," and if my will is no longer mine, what personality can I continue to have that is mine?

But giving up my will only means my extinction if personal identity is a function of will. For a long time, several hundred years, we have thought that identity and will cannot be separated, so we cannot be blamed for our fear of giving up our will. But for a very long time before we thought that personal identity is a matter of will, we understood that it is a matter of love. What if that earlier thought is right, as I think it is (an idea hardly original with me)? What if we are who we are because of who and what we love rather than because of what we will?

If so, then loving God and other persons enough to empty ourselves of our will, yet continuing to love, would reinforce rather than extinguish our identity. Extinguishing our will would remove the impediments to love that the will might raise. The loving welcome of the Holy Spirit requires that we give up our will, but it also gives us ourselves in a new form, the form that comes about in love. 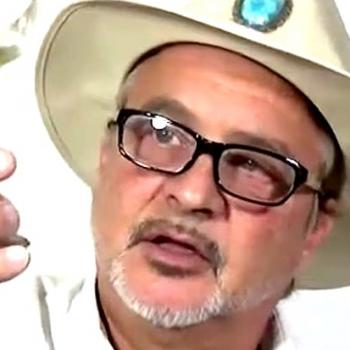 Bob Dylan at 80. My top 80 greatest Bob Dylan songs. Today: 80 through 71...
Francis Beckwith
Get Patheos Newsletters
Get the latest from Patheos by signing up for our newsletters. Try our 3 most popular, or select from our huge collection of unique and thought-provoking newsletters.
From time to time you will also receive Special Offers from our partners that help us make this content free for you. You can opt out of these offers at any time.
see our full list of newsletters
Editor's picks See all columnists