Pastor to Pastor: President Hinckley's Apology for Racism in the Church

Editor's Note: This is the second in a series telling the stories of significant black Mormons in history. Read earlier posts: the Introduction to the series and the story of Jane Manning James. 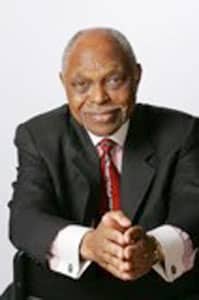 I answered my office phone and accepted an invitation to help host Pastor Cecil "Chip" Murray during his visit to BYU. As the caller explained who the pastor was, I realized that we Latter-day Saints and he, the pastor of the First African Methodist Episcopal Church in Los Angeles, had common ground. Biddy Smith Mason, a founding member of the Church which Dr. Murray now headed, had been a slave of Mormon pioneers before her emancipation in California. Knowing Biddy's story, I was eager to meet her ecclesiastical successor.

When I entered the office room where he was conversing with other BYU personnel, I had an overwhelming sense of his goodness. He radiated a love so bright that my eyes teared.

A group of us went with him to lunch, prepared by BYU chefs. There were several BYU professors: Marguerite Driessen, Andrew Skinner and Roger Keller, and at least one student, Joshua Aker. We spoke easily. At one point, one of the professors said, "Dr. Murray, I hope you can forgive us for the way our church behaved toward blacks." The pastor gave him a "Don't worry about it" gesture and said he was aware that the priesthood restriction had been abandoned.

At the conclusion of the meal, he did something I've never seen another guest do. He pulled me aside and asked that I take him to those who had prepared the meal. He wanted to thank them. They were one room away, in the kitchen. Pastor Murray opened his arms as though he would embrace them all as he expressed his gratitude. Exactly the sort of thing Biddy Smith Mason would have done, I thought. Though Biddy Smith Mason became wealthy, she never forgot her years in bondage. She loved those who served her and never considered herself above them.

The main hosts were preparing to rush the pastor off, and I was taking care of some final details. I observed him with each lunch companion. He called them by name and blessed them, his hand raised. By the time I approached, he was being led away to the BYU travel bus, and then he was gone.

At the time, I was deeply concerned about a struggling son. I wrote to Pastor Murray expressing regret that I hadn't gotten to him in time to receive his blessing, and then I told him about my son. His words to me were remarkable:

To your oldest son, dear daughter, if you find a quiet moment with him,and gain his permission to speak while he listens, promising to then listen while he speaks, committing not to interrupt—

"My dear son, Iwant to ask your forgiveness. Forgive me for whatever things I have done or failed to do that caused you such anger and anguish of spirit. Forgive me for the months and years and feeling your hostility and knowing that in some way you were responding to me, convinced that I trigger these negative feelings in you.Forgive me for not having asked forgiveness before. Forgive me for not being able to sit with you and ask about your pain. Yes, I know that there are two sides to every question, but my side is not important right now. You will see a change in me from this moment on. I ask no change in you, just that you notice a change in me. I accept you just as you are.Now I shall sit and listen to you. I love you.. . . "

Now we listen.Now we pray we have opened a door . . . Your words will go with your son to the grave . . . He is a child of his generation, in constant rebellion against anything that fences him in with authority or discipline or beyond himself.

He will come to himself. Watch.

Indeed, he was a worthy successor of Biddy Smith Mason, who chose to spend her years of liberty visiting those in prison, delivering and caring for babies, providing sustenance and comfort for others. By the end of her life, she was a renowned philanthropist. I believe she forgave all wrongs committed against her.