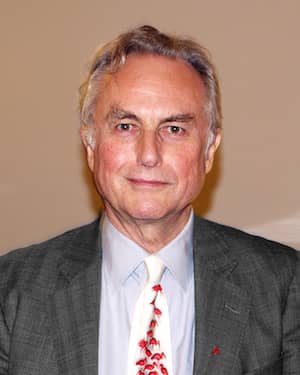 British biologist Richard Dawkins (b. March 26, 1941) is a public intellectual best known as a proponent of the public understanding of science and a vigorous critic of religion.

Dawkins was born in Nairobi, Kenya when the country was a British colony. He was raised in the Anglican Church but became an atheist after learning about evolution as a teenager. After graduating Balliol College, Oxford in the 1960s with advanced degrees in zoology and a specialization in ethology (animal behavior), Dawkins taught zoology at the University of California, Berkeley before returning to Oxford in 1970.

In 1995, Dawkins became the first Simonyi Professor for the Public Understanding of Science at Oxford, a position he held until 2008.

He authored The Selfish Gene (1976), a book said to have sparked “an almost immediate revolution in biology” with its gene-centered view of evolution by natural selection. It was in this early title that Dawkins coined the term “meme” for a unit of culture—a word that has since come to designate one very specific form of that unit, the online image with text. The Blind Watchmaker (1986) addressed the very issue that had ultimately changed his mind about religion – the compelling complexity of life.

Dawkins’s career took an abrupt turn after the attacks of September 11, 2001. Though he had been an atheist for his entire adult life, he had seldom engaged in direct criticism of religion, preferring to focus on the public understanding of science. “My last vestige of ‘hands off religion respect disappeared in the smoke and choking dust of September 11th 2001,” he said in his book A Devil’s Chaplain, “followed by the ‘National Day of Prayer’.” He marked his transition with an excoriating article in The Guardian published just four days after the attacks.

Though he has continued to write on scientific topics, Dawkins’s work and public profile have since 2001 been dominated by criticism of religion, including the 2006 book The God Delusion. It was this book that propelled Dawkins to the forefront of the growing atheist movement worldwide, leading to his designation (along with Sam Harris, Christopher Hitchens, and Daniel Dennett) as one of the “Four Horsemen” of the New Atheism.

In recent years, Dawkins has been embroiled in controversy for remarks seen as denigrating or ridiculing feminists and feminism, despite his public insistence that feminism is “enormously important.”

Dawkins is currently an Emeritus Fellow of New College, Oxford.

Image by David Shankbone CC BY 3.0 via Wikimedia