Not talking, not listening, not the answer.

Perhaps you remember hearing about my friend Bub in an earlier column. Bub is, to put it mildly, impassioned. Mostly it is environmental issues that really get his blood pressure up.

It is interesting to watch Bub when he is On A Roll over one of his issues. You can see precisely when he loses his audience. It doesn't take long for this to happen. There is a subtle change in the eyes, in the voice, and Bub is no longer talking with you or to you. Something in you knows. He is only talking at you from here on. You have become less of a person and more of a target. It's not that he intends for this to happen. It just does. Only two things are needed from you now: sit with rapt attention, and then agree with him vehemently when he is done, which may be some time much later this afternoon. You are well-advised to mind the requirements of your role.

Perhaps you do agree with him. But even if you do, you probably mentally retrieved your hat and coat and left the hall when that subtle change in Bub's eyes and voice happened.

Bub is not the only one who does this. I've spent a fair amount of time in front of audiences, and I'll claim some expertise here. It's quite common. Do I ever do this? You bet I do! In the moment, the Inner Critic syncs up with the Inner Performer, and there is this sudden belief that what I'm delivering is a speech worthy of Hamlet, or Macbeth, or maybe even Perry Mason.

Here's a bit of advice to people speaking in front of an audience, no matter how large or small: don't listen to your Inner Critic. There is little he can tell you that is either useful or worthwhile during that time you are strutting and fretting upon the stage. He may be of more use after, but not by much. What should you be listening to? You should be listening to your audience. Listen to the sound of their breathing, to way they shuffle in their chairs, to the look in their eyes. Especially that: listen to the look in their eyes. Try to listen to them think. And don't ever let yourself talk at them.

Unless, of course, persuasion is not really what you are doing. Self-congratulation over one's own superior moral stance is terrifically self-seductive.

I sit on the High Rede of The Troth, one of the major Heathen organizations. In more mundane language, that means I am on the Board of Directors. It is our job to set policy and direction for the organization. The founding policy of The Troth is that we don't have room for racist heathenry hereabouts, and everybody in the Asatru/Heathen community knows it.

I also have a Facebook account, where I have several hundred "friends." I do not actually know most of these people. Presumably, they read my book of Heathen-oriented stories and liked it, which makes my day. Then they found me on Facebook and sent me a Friend Request, one of the internet's small but pleasant honors.

I do a little looking into people before I accept, glancing over whatever I can see of their profiles, looking for specific words or phrases that front for people I'd rather not be around. There is even a number, 1488, that Nazitru racists use to identify themselves. If I don't see these, I'll probably accept. As a result, my Facebook feed is busy. Facebook is an enormous waste of time, except for when it isn't. I have learned to skip over some people's posts entirely, while others offer the most interesting links.

There are the waste-my-time links: "Share this with your friends if you love sesame bagels, and receive cosmic blessings." (Who makes this stuff up?) There are political links from all over the spectrum. A fair amount of current biochemistry comes my way through Facebook. Don't forget all the family and "real" friend news. And there are posts and links about Asatru/Heathen issues. Lots of those.

I sometimes receive messages from friends through Facebook, informing me that some other friend or friends of mine are known 1488ers, and why I am still friends with them? Some such messages tell me flatly to unfriend so-and-so, or lose the friend who is making the demand.

The friends who send me such messages want to rid the world of one of its evils. The intent is easy to appreciate, although the methods are sometimes a little odd. They create their own Facebook groups, where all racists are banned, I tell you, banned. I'm not sure what good this does, as most of the Nazitru faithful only want to hang out with other Hitler Youth anyway.

Some of the people who are fingered in this way are a surprise. One such is a pretty blonde girl with very white skin, who, I was assured, is not really a person at all, but the invention of some guy who acquired photos of a young woman and then built a racist personality around the pictures. I guess the idea would be to interest young men in Nazitru heathenry by this ruse. Is it true? I don't know. She/He/It posts convincing young woman chatter about friends and shoes and such, mixed in with the occasional racist bombast. I do know that I wouldn't want to be the fraudster when the probably-tough young men he hoped to rope in found out who the object of their online affection really was.

My New Fairy-Tale Research: All Queer, All the Time
Jeana Jorgensen
2 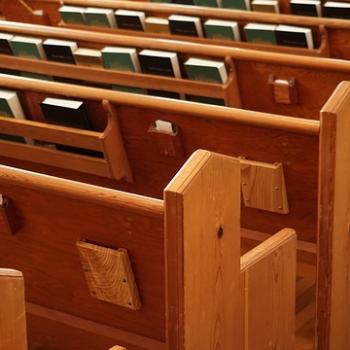 If They Don't Come Back to Mass...
Mary Pezzulo
4

On the Book of Mormon and the Goodness of God
Dan Peterson
Get Patheos Newsletters
Get the latest from Patheos by signing up for our newsletters. Try our 3 most popular, or select from our huge collection of unique and thought-provoking newsletters.
From time to time you will also receive Special Offers from our partners that help us make this content free for you. You can opt out of these offers at any time.
see our full list of newsletters
Editor's picks See all columnists