How the Quran and Islam Honor Mary

More than two centuries ago, there was a devout woman in Palestine who made an appeal to her Lord:

O my Lord! Behold, to You do I vow [the child] that is in my womb, to be devoted to Thy service. Accept it, then, from me: verily, You alone art all-hearing, all-knowing!

She was expecting a male child, and she planned on devoting him to the priesthood, which only males could do. Yet, the boy she expected was actually a girl. Thus, knowing that she couldn't make her a priest, she prayed thus to the Lord:

O my Lord! I have been given birth to a female, and I have named her Mary. And verily, I seek Your protection for her and her offspring against Satan, the accursed.

This story was not taken from the Bible, but rather the 19th chapter of the Quran, which is, in fact, named after her. This may surprise many of my Christian readers, but it should not. Both Christ and his mother are very highly revered in Islam and by Muslims all over the world.

Yet, in the passage about the birth of Mary, which Catholics commemorate on December 8 in the Feast of the Immaculate Conception, there is a key passage that many translators of the Quran have completely missed despite its huge significance. The literal phrase in Arabic is laysal dhakaru kal untha, which means "the male is not like the female." Many translators have interpreted the verse like this: "But when she had given birth to the child, she said: 'O my Lord! Behold, I have given birth to a female'—while God had been fully aware of what she would give birth to and the male is not like the female..."

Twentieth-century Quran translator Muhammad Asad interpreted it differently, and it is one that I like so much better:

But when she had given birth to the child, she said: "O my Lord! Behold, I have given birth to a female"—while God had been fully aware of what she would give birth to, and [fully aware] that no male child [she might have hoped for] could ever have been like this female...

Let's look at that Quranic quote again: "No male child [she might have hoped for] could ever have been like this female..."

That is the greatness of this woman, Mary, the mother of Jesus Christ. The passage finishes with the Lord lavishing praise upon Mary's mother, the magnificent woman born centuries ago in Palestine:

And thereupon her Lord accepted the girl-child with goodly acceptance, and caused her to grow up in goodly growth... (3:35-37).

No male child she might have hoped for could ever have been like this female, Mary. She was the mother of Christ; bearer of the Word of God, which was communicated unto her. Mary took on a terrifying task: having a son without a father and having to face the utter shock and likely disgust of her community.

She would have to face horrific accusations and terrible maligning of her character. This character was so impeccable, in fact, that her people—as the Quran mentions—nicknamed her "Sister of Aaron"—and not just any old "Aaron," but the brother of Moses himself. It was an enormous test, and it was so difficult that she cried out as Christ was being born:

Oh, would that I had died before this, and had become a thing forgotten, utterly forgotten! (Quran 19:23).

But, she did it with grace, faith and a fortitude that would shame most of the staunchest believers. She was an amazing woman, and I am truly blessed that my faith calls upon me to honor this Mary in the most reverent way possible. In fact, the Quran challenges me to be like Mary:

And [We have propounded yet another parable of God-consciousness in the story of] Mary, the daughter of Imran, who guarded her chastity, whereupon We breathed of Our spirit into that [which was in her womb], and who accepted the truth of her Lord's words—and [thus] of His revelations—and was one of the truly devout (66:12). 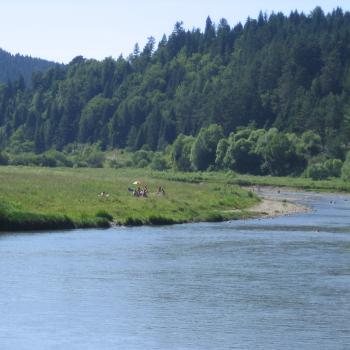 Come a way and rest a while
Father Pablo Migone
2

Returning to the Interior
Sherry Antonetti
4

Is the Old Testament a Christian Book?
Michael Bird
Get Patheos Newsletters
Get the latest from Patheos by signing up for our newsletters. Try our 3 most popular, or select from our huge collection of unique and thought-provoking newsletters.
From time to time you will also receive Special Offers from our partners that help us make this content free for you. You can opt out of these offers at any time.
see our full list of newsletters
Editor's picks See all columnists