The God Particle and You, Part 1: The Higgs Boson

This four-part series will describe the elusive "God Particle," what it is, what it means for science, how it relates to ancient spiritual knowledge and what it all means for you.

Scientists announced that they have spotted God waving back at them from a fleeting particle in the large hadron collider (LHC) 350 ft. underground on the French-Swiss border. "Gosh darn," the deity was heard to say. "Can't a spirit vacation with any privacy? Even my best disguises don't work anymore." Scientists said the encounter, though brief, was not really God at all but some form of a subatomic gremlin since we all know that God doesn't exist.

Okay, the above never really happened, at least not like that. I guess you were smart enough to see through my jibe. I just couldn't resist poking fun at the media's sexy sound bite for the Higgs boson dubbed the "God particle." And let's have a perverse chuckle at the way scientists cringe at the word "God." Just had to do it. Okay, now that it's off my chest, let's get serious because a very incredible thing has happened.

The probable discovery of the Higgs boson is less than God but more than a particle. God—intelligent energy, consciousness, or whatever you care to call it—expresses itself through a multiplicity of forms. This process involves energy and particles producing the totality of what we call creation. The Higgs boson is an important piece of that mosaic. It's like a quantum enzyme that converts energy to mass, but it is not quite a particle, and this fact will underscore the fantastic quantum weirdness of the subatomic world that makes up all we perceive.

What's All This Quantum Stuff?

You might be asking yourself why an article about quantum physics is appearing in the spirituality section of Patheos. Ah, but the title of my column is Quantum Spirituality. That's not just a hot sounding buzz word to get you to read my stuff.

Most of my work consists of explaining the parallels between ancient spiritual knowledge and the cutting edge theories of sciences such as quantum physics and psychology. I believe we can construct a powerful model of the creation and the nature of reality by using science and the spiritual wisdom of the ages to build an X and Y axis of information.

By juxtaposing the parallel information from these two sources, we create a framework of validation more powerful that either of the two streams of inquiry in isolation. This is about integrating our fragmented natures—our left and right brains, our male and female selves, our analytical and intuitive faculties—just as Jesus said in the Gnostic gospels and just as psychologists like Jung and Maslow have said in modern times.

Back to the God Particle. Dozens of countries spent 10 billion dollars to build a seventeen-mile long super particle collider more than 300 feet underground on the border of Switzerland and France.

The collider shoots protons at near speeds of light around this seventeen-mile loop. The particles collide randomly at high energies.

The purpose of this quantum bumper car ride is to find new particles in the breakdown of the destroyed protons. But the particle for which they've really been seeking is the Higgs boson. The Higgs boson is believed to be the gateway particle where energy becomes matter. On July 4, 2012, they believed they'd finally found the Higgs.

In my next column we'll get into the fascinating story that may be a major thread in tracing back the fabric of creation. 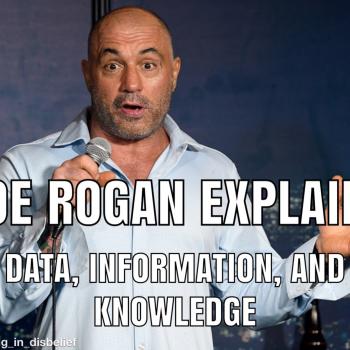 About Peter Canova
Peter Canova is an author, prominent national speaker, and leading authority on the secret teachings of the Gnostic gospels, quantum physics, the Sacred Feminine, and ancient spiritual traditions. His acclaimed spiritual thriller, Pope Annalisa, won an unprecedented nine national book awards in less than a year since its publication including the Nautilus Gold Award for visionary fiction formerly bestowed on such authors as Eckhart Tolle, Deepak Chopra, and His Holiness, the Dalai Lama. Peter recently signed an agreement with Production Executives of the Oscar winning film Black Swan to adapt Pope Annalisa as a major motion picture. His website is popeannalisa.com.
Get Patheos Newsletters
Get the latest from Patheos by signing up for our newsletters. Try our 3 most popular, or select from our huge collection of unique and thought-provoking newsletters.
From time to time you will also receive Special Offers from our partners that help us make this content free for you. You can opt out of these offers at any time.
see our full list of newsletters