I spent an hour or two yesterday at the Living Insight Center with two friends visiting from out of town. I had never heard of the place before, but one of my friends went there regularly for a few years to do Reiki work and sessions with singing crystal bowls. It turned out that the center was only a few blocks away from my apartment—close enough to walk, if I had a mind.

The center is a converted residence, a two-story brick house in the Clayton suburb of St. Louis. Each room of the house has been converted into a shrine to a different religious tradition. A few shared space—the "monotheist" room (more properly the Abrahamic room) held items from Christianity, Judaism, and Islam. Predictably, the various American Indian tribes shared a room. There were also Hindu and Buddhist rooms, and, more esoterically, an "ocean and sky" room. Jack, the center's keeper, said people always felt like they were surrounded by a blue expanse in that room, even though the room had been painted a different color before, so eventually they had an artist paint the room with a sky and cloud motif.

While we stood in the sky room, Jack pointed to a spot on the floor opposite the massage table that took up most of the space. "Stand over there," he said. "The energy's strongest there—you rock back and forth, just like you were at the ocean." My friends walked through the area and seemed suitably moved, commenting on the sensation as they passed through. When I walked over the spot, I didn't feel much of anything.

I'm not surprised by that. I've never had much of a talent for feeling energy, at least not the energy I'm told I should feel because others have felt it.

The message behind the Living Insight Center—at least as best as I could discern in the short time I was there—was the inherent validity of all religions. As a sign near the door said, "many paths, but one source." This is, of course, a common sentiment, one I expect many Pagans agree with. A religion—any religion—is just "one path up the mountain." This is a fundamentally positive message: there is a destination, enlightenment, a singularity, and there are many paths to achieve it—including your own. With enough effort, all routes work, and all are valid as a result.

This is not a statement I can profess myself, however. I do strongly believe that the many paths are fundamentally equal. But to me, they are equal only in that they are all equally in doubt.

This may be an odd thing to say. I am, after all, a religious person, and probably more dedicated to my religion now than at any other point in my life. If all religions are equally in doubt, then why do I believe in any at all?

The answer is actually pretty simple: it's the one I like best, the one that appeals to my own predilections. And that is almost certainly due to the circumstances in which I was raised. I am a Pagan largely because my parents are Pagans. Had I been born to Methodists, I have no doubt that I would be a Methodist. We sculpt and are sculpted in return.

I understand that my beliefs are not a fixed thing. They aren't something that were meant to happen, had to happen, but were the result of the weird probability of my upbringing. They could have been different. I could have seen the world in a vastly different way. If that is the case, is it sensible to believe too much? What then is the sense in zealotry when, with just a few accidents of fate, my view of the world could have been entirely different?

When asked to compare himself to James Joyce, his great predecessor in Irish literature, Samuel Beckett once said, "Joyce tends towards omniscience and omnipotence as an artist. I'm working with impotence, ignorance." Often, I feel the same way. The thought process behind a statement like "many paths, but one source" feels like unwarranted omniscience to me—a statement that we know truth in some sense, and how to achieve it. Personally, I'm not sure any religion—even my own—is the way up the mountain. I'm not sure the mountain itself exists.

So then why go on with religion at all? Why continue with the robes and chanting if I doubt their truth?

I have no answer, except that my Paganism is mine, and I love it for that. Is that justification enough? Perhaps not, but it's the justification that I have. I find more tortured apologetics to be, in the end, little more than elaborate ways of avoiding a similar underlying fact.

I felt more than a little disappointed in myself as we left the Living Insight Center. I was frustrated that this place, which clearly meant so much to my friends, did not affect me much. I was disappointed, but not surprised. A place like that is clearly meant for people of faith, people whose capacity for faith is so great that they can hold a dozen disparate religions in their breasts. People willing to believe that each one of them is true. I am not, and do not think I ever will be such a person. I am not a man of faith. I am a man of doubt.

What Do You Do After a Pandemic--- Carry On!
Ben Witherington
2 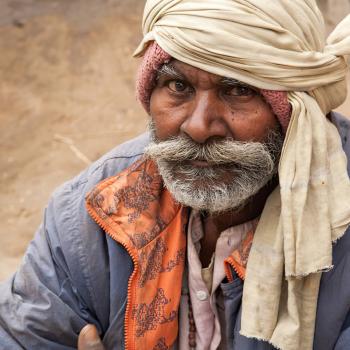