The Growing Threat of Christian Dominionism

Christian dominionists seeking to impose theocratic rule on others are powerful beyond their numbers, and Pagans should keep a sharp eye on them. Their power comes from two factors:  First, they manipulate our system to influence high levels of government.  Second, and more importantly, they take advantage of a flaw that I hope will not be fatal to how American elections are conducted.

Katherine Stewart reports in the The Guardianhow several hundred thousand school children will be taught after school that when God says to kill people, their responsibility as Christians is to kill them, and to do so without questioning the orders. Stewart has written a book about the so-called Good News Clubs that are behind this, but they make up only a part of the problem.

"The Family" counts among its members many leading Republican senators and others in government and the military. They also created the national "Prayer Breakfast," which gets national attention as a religious gathering, and even presidents attend.

Jeff Sharlet, who has deeply researched these people, describes how its leader, Doug Coe, told people they need to "emulate" totalitarian regimes in which children kill or inform on their parents in order to build a new society.  While this seems a repudiation of Christian principles, those acting for God have different rules to follow than the rest of us. Doug Coe's son and The Family's heir apparent, David, explainedwhat it meant to be a divinely chosen leader:

he asked a young man who'd put himself, body and soul, under The Family's authority, "Let's say I hear you raped three little girls.  What would I think of you?" The man guessed that Coe would probably think he was a monster. "No," answered Coe, "I wouldn't." Why? Because as a member of the Family, he's among what Family leaders refer to as the "new chosen." If you're chosen, the normal rules don't apply.

Like Stewart, Sharlet also has a book, The Family: The Secret Fundamentalism at the Heart of American Power, for anyone wanting to learn more.

The New Apostolic Reformation is another dominionist group with close ties to a great many Republican politicians, including presidential candidates. Apostle Lou Engel explained,"We are called into the very image of the Trinity himself, that we are to be His friends and partners for world dominion." Another member of the dominionist New Apostolic Reformation explained that Godly rule will at first appear to be "totalitarian" but "the kingdom will move from a point of necessary control while people are learning truth, integrity, honor, and how to make decisions, to increasing liberty so that they can."  This is the murderous and demented logic Mao Tse-Tung started up in 'religious' garb.

Dominionists and their sympathizers in the military have caused serious problems for soldiers who disagree with them. There are a great many examples, and you can keep informed about them through the Military Religious Freedom Foundation.

The American political system has an Achilles Heel.  Our electoral rules make it impossible for third parties to successfully compete with the two major parties. Plurality votes guarantee that in close elections a vote for a third party is effectively a vote for the major party you like least.  So under most circumstances only one of two parties has a chance to win.

One of those parties is controlled by a small minority of the country because they vote in primaries whereas most voters do not.  And whoever wins the primary will be that party's choice for the mainstream.  Even if the candidate elected in a primary is seriously out of touch with most Americans, if the candidate running against an incumbent perceived as a failure, there is a decent chance the new candidate will win. 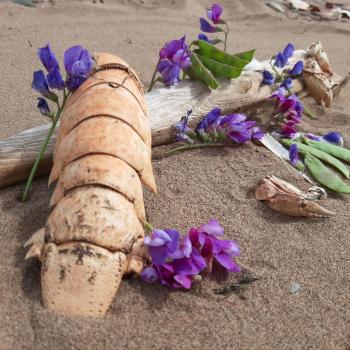 Living the Liminal: How to Witch When Moving
Lisa Jade
3

Were the Sacrifices Worth it?
Suzanne Titkemeyer
4

Twisted Scripture: Bonus- Sharing the Message of Grace
Andrew Farley
Get Patheos Newsletters
Get the latest from Patheos by signing up for our newsletters. Try our 3 most popular, or select from our huge collection of unique and thought-provoking newsletters.
From time to time you will also receive Special Offers from our partners that help us make this content free for you. You can opt out of these offers at any time.
see our full list of newsletters
Editor's picks See all columnists