Last weekend, I had the pleasure of hosting another Bay Area Heathen Yule Dinner. A few friends and I rent a conference room from the city and invite all the Heathens we can get a hold of. We plan it for the weekend prior to Yule, so the event won't conflict with kindred, family, or personal observances on the actual date. As hosts, we provide the major meats and ask attendees to bring something else to share. It's a nice evening, with a good sumbel and way too much good food.

This year, one of our guests made a very public call for people to proselytize, an idea that causes most Heathens, and indeed most Pagans, to recoil in horror. Many people are driven away from religion by obnoxious twits who believe that by shoving beliefs down folks' throats, they're doing them a favor. Mention proselytizing, and really stupid counter-productive behavior is what comes to mind for most.

So let's step back from the word proselytize. Perhaps we can talk about some other P-words without getting our psyches twisted into a knot. Here are two: promote and publicize. Depending how one goes about it, these can be good things.

After decades of resisting and reviling religion in any form, I noticed that I had been sliding slowly toward, well, something, where that something had to do with the Nordic myths I had learned at a young age. When I eventually ran into organized Heathenry quite by accident in 2001, I remarked when introducing myself that I had thought I was the only one who felt that way. Someone in the group replied, "Yeah, we've heard that before." And when I first attended a blót, some of the words were new to me, but the feeling, the attitude, the apparent meanings were all congruent with what I had known inside myself for a long time.

I still laugh quietly to myself at that recollection. But there is something else in it that makes me sad. Some people read the myths, whether our Scandinavian/Germanic ones or those from somewhere else, and find that the old stories just won't leave them alone. And, while we have very few instructions from a thousand years ago on how to practice Ásatrú, there is broad agreement on how those stories advise conducting one's life. Hairsplitting theological discussions aren't necessary. For a lot of people, this thing, this practice, just works. Over all those centuries, how many de facto Heathens spent their lives hiding out in their own minds? Now that we don't have to hide anymore, at least in much of the world, how many more are still hiding out just because they think they are alone in their feelings?

Just a few years ago, a man on the East Coast died suddenly, leaving instructions that he wanted a Heathen funeral, but offering no help or direction on how to do that. It is likely that he didn't know himself. We in The Troth had never heard of the man, but his relatives eventually found us. One of our ordained gythjas organized and officiated at the event, and the family was pleased with the result. We were proud to help bury him with his sword and spear, but how much better it would have been if he had known other Heathens during his lifetime.

Our friend at the Yule Dinner spoke of wearing our hammer pendants and lapel pins openly. This is something I already do, as do many of the Heathens I know. Sometimes people ask about my lapel pin as a result. Living where I do, there is little risk associated with this; in other parts of the U.S., the situation may be different. Bumper stickers are easy and cheap. In some locales, even a billboard may be affordable. Of course, there is the Web, but that requires someone to already know what to look for. If a person is searching for a vague and ineffable something whose name they do not know, Google can't help much. It is time to get creative here: how do you put the right idea where passersby can see it, and do it without setting off the "Proselytizing!" alarms that a lot of folks already have, justifiably tuned to a fine degree?

Once you have a person's attention, what do you do with it? You may only have a few seconds to make a useful contact. What will you say?

It is important to think this through from several angles. Not everyone is interested in the same aspects of a given religion. Some will be interested in the supernatural or esoteric aspects, while others, like myself, really are not. And people respond to the Folkish Argument (the idea that biological ancestry is important when choosing a religious practice) in a variety of ways, from instant agreement to bristling rejection. Remember: when publicizing a religion, you are building what amounts to a sales pitch. What is it that you are really trying to sell? And why are you doing it? If you don't know the answers to these questions, your efforts are likely to embarrass. If your answers are just plain wrong, you will embarrass more than just yourself. 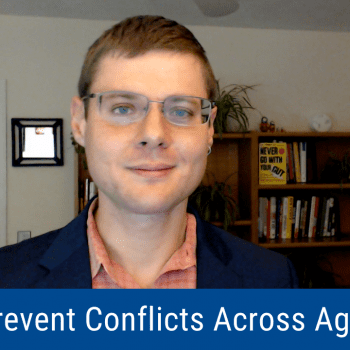 How to Prevent Conflicts Across Age Divides (Video and Podcast)
Gleb Tsipursky
Get Patheos Newsletters
Get the latest from Patheos by signing up for our newsletters. Try our 3 most popular, or select from our huge collection of unique and thought-provoking newsletters.
From time to time you will also receive Special Offers from our partners that help us make this content free for you. You can opt out of these offers at any time.
see our full list of newsletters
Editor's picks See all columnists